You are here: Home / Love and Romance / Below the Candelabra 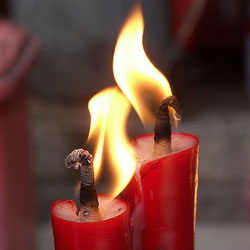 An Eternal Love Story – Below the Candelabra
Photo Credit: www.cepolina.com

As the light went off, the wind made the windows rattle. I could see only a bleak light at the end of the wood. It was the light coming from the iron mill. I had to put on a lot of fight with my family so as to settle in such a place where there was no house around. Nature always inspired me and I knew the place would provide me with the perfect environment to transform my dreams into reality.

I lighted the candle. It made the silver candelabra glow. I ran my fingers over it and tried to feel it’s texture. The chill January wind had made them numb but the touch brought back into life the memories of my dead wife. It was the present I gave her on our first anniversary. Anjana so loved it. She even carved our names on it. I felt the words below my fingers, ‘Sahil Anjana’.

In the dim light of the candle I tried searching for my walking stick. I noticed the cracks on my spectacles. No matter how many times I told myself to get it repaired I always kept forgetting. When I could not get it after searching for five whole minutes I fumbled towards the book shelf. From its second row I took out eight novels that were hidden under a thick blanket of dusts. I wiped them clean with my shawl and placed them on the table. As I opened the first page of one of the novels, the light illuminated the few words written on it, ‘Dedicated to my twins Sanjana and Anil’. The page was otherwise blank. I flipped through all of them. As I was about to close the last one a photo slid from it and fell on the floor. I bent down and pick it up. It was face down and written on it was, ‘A picture perfect family’. It was Anjana’s handwriting. I turned it and the gloom returned on my face. It was the picture we took the day Anjana made me the father of the most beautiful twins in the world, Sanjana and Anil.

It was lightning outside and few rain drops got in through the cracks on the doors and windows. I could hear the loud thunderclap outside. I recollected my memories. We were returning from my book release that was scheduled in one of the prestigious site in the city. It was my eight book and my first that I wrote since I was blessed with twins. I decided to take Anjana and the kids as it was supposed to be a memorable event for me. It indeed was. It was almost eleven when we were caught in a heavy downpour. I was driving rather fast as our house was outside the city and I wanted to reach by twelve. But we never happened to reach. Our car collided with a truck. I was the least injured although I was the one responsible for it. Before I could take them to hospital Anjana died. Sanjana and Anil died a week later. They were three when they died. Had they survived one more day, they would have been four. Thirty one years and I still remembered vividly all the minute details of the incident that took place that fateful night. I gave up writing all together after that.

I stacked those novels on top of each other. I could smell the rain outside. And all of a sudden I wanted to write. I grabbed a pen and after struggling for few minutes I wrote my first word after thirty whole years.

‘You were never far from me. Every night I slept I saw you in my dreams. Every single night you told me how much you hated the fact that I gave up writing and today I am writing. Only for you. but there is one thing that I have missed every passing moment. Its been long since I told you that I love you. And tonight I want to do that. Yes. I love you still with all I have. I will love you till the end of me’.

I kept the candelabra on top of the sheet. I had no intension of letting my last note go in waste. I knew it was supposed to be discovered by someone soon. I glanced at the wall clock. It was almost my time to retire into bed. But that night was different. I sipped in some water after taking my sleeping pills. I closed my eyes.