You are here: Home / Love and Romance / Grey Wisteria 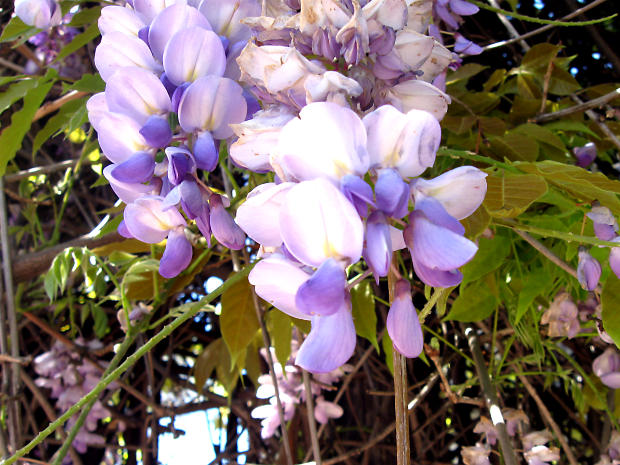 “How long before I begin to chase you again?”
She just looked at me, always the coy expression on her face.
I stood there, the cold November wind blowing the shiver into me and the hair across her face.

And I watched her.

The alarm had been beeping for half an hour now, and I felt it ring harder in my head. I twisted about in the bed, my hand searching the other side. It was empty, it was cold. She always woke up earlier than me and disappeared into the walls of the house. Before, I would call out to her, and maybe search for her. But not anymore. It annoys her more if I do, than if I don’t. If I do, I am annoying her, and if I don’t, I’m just an indifferent pig.

I pulled the sheet over my face and just lay there for a while, hearing the voice of the morning slowly turn into the unsympathetic noise of everyday, like a prologue to story I already know the ending of. I heard a door open and shut. If it had been like before, I would usually run to see where she might be going, but not so much. I got out of bed and into the shower.

There are times when you stare at the showerhead, not remembering how long you’d been staring at it, and run past the things you’d planned for the day, only to arrive at a moment where you tell yourself to stop. This isn’t real, and watch it dissolve into the many other things you’ve lost the feeling to do.

I skipped work, because there wasn’t a reason otherwise. I took my car and drove to the other side of the town where the hills were. She and I used to go there, from when we were actually interested in things. It was awfully cold, but I felt the numbing of my limbs a relieving experience. I watched the hills as if they were another life altogether in a parallel– unaffected by the mechanics of existence. A sacred calm among the noise of the world.

You shouldn’t woken up. Not yet today. I was about to know if she was going to call me.

I shook my head. And then I sighed, because I always woke up too early, or I woke up too late. Hearing myself was a sign I was falling asleep again. I was fighting it, because I didn’t want to fall asleep, not now. Because I always woke up alone, and I didn’t like the taste of it. But the falls I took were hard, and the pain at the end of it was one from a bittersweet, fleeting experience that I liked to live over and over again. I got back into my car and let the sleep carry me to the parallels.

Spring suited her. It was lively. Full of life and loves. Just like her.

We were walking in an avenue of wisterias, a purple veil over us.

“Are you sure about this?” she asked me.
“Have you ever seen me more serious?” I took her hand in mine, “If I wasn’t sure, I’d never had asked.”
Her eyes were filled with tears. “But I cannot make up my mind.”
“Anything you choose will be my choice too. There are no wrong answers.”
“Well, Labrador it is then.”
“Sure, dear.”

The sun began to set and I watched the light fall on her face.

She opened her mouth to speak, but the resonance was missing.

I was awoken by a police officer. Apparently, I had fallen asleep in a place I shouldn’t have. He asked me to leave, without much warning, given I had a face amiable enough.

I came home, and found her already asleep, with nothing for her to say. Sleeping next to her could be nothing, but I liked it for the warmth, if not for the presence of her. Because her being present was still a huge void of absence. I knew she wasn’t really sleeping, I could tell from the way she would lie stiffly facing away from me.

The enchanting thing about falling asleep was that I could live in the happiness I did not possess. It had always been so. That I lived a life in the parallel world– one where I was not just a silent sorrow in her life, where we lived our lives like we were supposed to– in my dreams. And I almost never found a connection between the two of them. I did not even recognize myself in them, or her. But there was something about tonight. Maybe it was the sip of scotch or just the air in our room that made me feel like things were about to change.

We were sitting on a bus which I recognized correctly to be No. 4553. This was where we had first met, and where I realized that she was the one I was going to chase forever. That day I skipped three buses and was two miles from home, till I gained to courage to go talk to her.

We were sitting this time still next to each other, the autumn orange complementing her silence. It was a painful feeling, as felt myself slowly wear away with the distances we had once traveled. We got off the bus and  to the avenue. The autumn had not, however, been kind to the wisterias, wilting the life out of them. The dried leaves still rustled beneath our feet as we walked over them. She was indefinably silent. I took her hand and turned her to face me.

“What is the matter?” I asked her. “Is it just me or is this place depressing this time of the year?”
She didn’t laugh, but looked away from me.
“Talk to me,” I said.
“I…”

The dream hadn’t ended. But her words were just not there. She was at a loss of words, and I could sense the end coming.
“I…,” Her voice disappeared into the silence of the deserted, barren avenue.
“I know what you are going to say, and I promise you that whatever it is, we will work it out,” said I.
She kept looking away from me and finally looked at my feet and then to my eyes.
“I’m sorry. But this has to end,” she said.
I felt the hum of her words hit me like a bullet to the head. She said it ever so subtly, with even this moment becoming something I loved so dearly. I swallowed whatever tried to pull itself out of me, and I just held her hand.
“Please don’t…,” I uttered.

I shook myself, wanting to wake up. For every dream I had left incomplete, there was always a lingering feeling that maybe the end of it might be good or bad. I left them so because I was afraid to see what lay behind at the very end. I prayed for the waves of the dream to come take me with them, and when I finally reached the end, I realized that I did not know how to swim. And I feared to drown. I was sinking.

Wake up, wake up.

She came in close and whispered in my ear.
“Goodbye.”

I could see her walking away from me, one more time.

“Slowly letting go is still loosely holding on, you know,” I said in some last effort to save it.

She turned around and we stood staring at each other.

The leaves fell from above, and the noise in my head the melancholy euphony to her tears.

I screamed as loud as my lungs allowed me to. I started to cry and she could do but watch me as I systematically fell apart right before her eyes. “Please wake up!” I cried.

She came and took my head in her lap, as I lay dying on that ground.

“You won’t wake up. You never will,” she said to me, peering deeply into my eyes.

“What? But why? I don’t underst…,” my words trailed as I suddenly remembered what I’d done.

The strangeness about that night was that it was that very night that she took her bags and shut the door behind her forever. I remember pleading, I remember crying and screaming for her to stop.

“Don’t you know you took your leap of faith?” she said to me, stroking my hair.
“I don’t know anything,” I said.
“You chose to live here forever.”

And then it played in my head.

Taken with grief and frustration, I swallowed all of my wife’s sleeping pills.

To live the life I knew I would never have in reality, I blurred the lines.

The bare branches stared at me as I realized where I was.

“You chose to live here forever,” she said.
“Then live with me,” said I.
“Forever starts here,” she said.

And I let her take me to wherever she wanted me to.

To live a life I wanted, where I was not just the spectator to my own demise, but the conductor of my own sinfonia. Because what are dreams but paper boats we hope to sail across on.