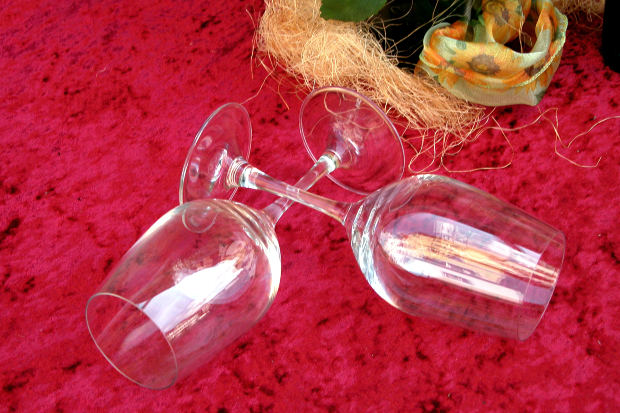 One of the things that they warn you against in the group session they organize on Saturday night is that of falling in love.

Perhaps it never strikes them, that people in such ruinous state as myself, who, don’t even know where they will wake up the next day, couldn’t possibly think about love in their wildest of dreams.  But there are always exceptions, and it was for those few cracked up life’s that this warning was sent out.

And little did I realize that I would become an exception. But to be fair to myself, I never planned it.

The day I met Patrick, I was smoking a cigarette at one of the street corners that I had ended up on in my state of randomness.  I took quick puffs, to warm my chilled body, the smoke seemed to freeze like halo rings before my very eyes. My nose was red and my eyes were watering. Sensible people were tucked inside four walls, probably seated in front of a cheerful fire. But then I never really counted myself as belonging to the sensible group.

So there I was smoking a cigarette, one after the other, filling my lungs and stomach with hell, when he crashed into me. It felt like I had been hugged by the rock of Gibraltar. He knocked the wind out of me, (for the first time I realized what that phrase meant) and I went sprawling down on the snow lined pavement with a loud thump, knocking my head against the kerb. For a second I was disoriented, breathless, but I got over it pretty quick. You see, disorientation has been one of my constant companions these past couple of years. I know how to handle it perfectly.

He swooped down on me, his entire six foot tall frame with swaying black cape – he looked like a superhero that had been sent there to save me.  Free me from this pain and miserable life of mine. I should have taken that as a warning sign, the perfect opportunity to control the barrage of emotions that would eventually beat down on me.

“Are you all right?” he spoke in a panicked voice. “I am so sorry”, came next and a bit more compassionately.

I looked up at him, a half smile on my face. A concerned voice was pretty rare in my world.

“Nothing new that hasn’t happened before, y’know’ I drawled while my brain worked overtime trying to picture how I looked. I also realized what falling in love at first sight probably feels like.

I smoothed my hair and dress and with his help was back on my two feet. He looked really upset and I felt a sort of pity for him.

“No big deal” I tried to assure him.

“Let me buy you a coffee…how about that?”

That was the next best thing after a cigarette and my financially cash strapped alter ego couldn’t refuse this attractive offer.  We walked into the closest café, ordered a latte each and stood around the counter awkwardly as we waited for the drink to be served.

“I am late; have to be at my friend’s place for his party. So I didn’t see you in all the rush…”

I smiled, prayed for the latte to take its sweet time in coming. His voice felt like a balm on my tortured mind.  I looked into his eyes, blue and deep, and I could picture losing myself in them. I felt like a dog in a shelter, eager to be patted, eager to be rescued from the drudgery and anxious to be loved.

The question I dread the most. An irrational anger crept into me, why do people ask this question? What damn business is it of theirs? The psychiatrist had warned against these reactions, so I took a deep breath as advised.

“Nothing. I mean I am kind of between jobs. Looking around”

I flinched. I used to be one too. The paint, brushes and canvas are now probably stacked, abandoned and moth ridden in the attic of my apartment. I wanted to talk to him about it, about the colors, how they spoke to each other, weaved the stories into the pictures, captured the emotions that are so difficult to voice, the dreams of the sublime, the songs of pathos. I wanted to talk to him about life and love.

I felt agitated.  I looked at his beautiful smile and kind eyes and there was this urge in me to speak my heart out, to be held in his arms and comforted, the way I haven’t been done in years.  I wanted to tell him how the colors in my life had all been washed away, and all that was left was just bleak and black. And I wished he could repaint it with a rainbow in it.

But I couldn’t. Not in this condition. I had been told that my reactions and emotions are not to be trusted in this state.

The coffee arrived and I thanked him, departed in the opposite direction, determined to put the man out of my mind.  I couldn’t possibly be anything other than a mere incident to him. So imagine my surprise (or shock?), when the very next second, he called out to me.

I stared at him. There were two thoughts that fought for space in my head. First, the thought of free food, and the second that could this be really happening? Did the man see something more in me?

If I have ever been nervous in my life, this was one of those times. He looked handsome in his jacket and jeans, suave, calm and collected – the opposite of me in every way.

It was a fun party; there was music, food, conversations that flowed as freely as the booze in that apartment. I stayed away from the alcohol, even though it was excruciatingly tough. Patrick and I hung out on the terrace, talking about exotic places, movies, authors. I felt at peace after a really long time. I felt in love after a really, really long time. And for the first time after Mat’s death, I felt I could crawl my way back into this life and be happy.

The night ended the way a romance in the films begins. We walked beneath the starry skies, the snow fell like cotton puffs; the world was shrouded in a peaceful silence.

Where do you live?

Oh. It’s far from here, I will take the metro.

And then I feel a familiar choking of my senses. There are tears that sting my eyes. Lies. The whole evening had been just a lie.

He gave me a light kiss, and I didn’t want him to stop, I wanted more. But I pulled myself back. I knew the psychiatrist at the rehab would say I did the right thing, yet, the burden I carried was weighing me down.  I was supposed to feel relieved, vindicated. But I didn’t. I felt worse than the day I joined the rehab.

His eyes gleamed as they caught the reflection of a street light. He seemed like an angel to me.  He could be my salvation. It took a considerable effort to restrain my feelings. It had been ages since anyone had looked at me with a happy face. It had been months since I had been happy to see anyone. I, who, had shunned company, crawling into my dark hole at the sight of any other human being.

So will I see you again? he asked.

I smiled; I had two choices – to live an illusion or to face the truth.

I conjured up a random phone number and gave it to him. Call me, I said, knowing very well that he couldn’t.

I watched him as he walked away, and my heart felt like a severed, lifeless object, crashing down a deep chasm at a freakishly high speed. I could feel the emptiness come galloping back, the same way it had when I lost Mat forever to a drunken driving accident, cheated by the Gods, that left me with a lifelong battle with grief.

I looked at the paper in my hand. The digits scrawled with a hurried hand. Patrick’s number.  I crumbled it. I have a long battle to fight, a battle with myself, and even though I feel the shards of my heart, and it hurts, I knew the best thing was to throw the paper away.

But I didn’t.  Someday, I promised myself, when the battle is won, I would call him.