You are here: Home / Love and Romance / A Siren’s Song 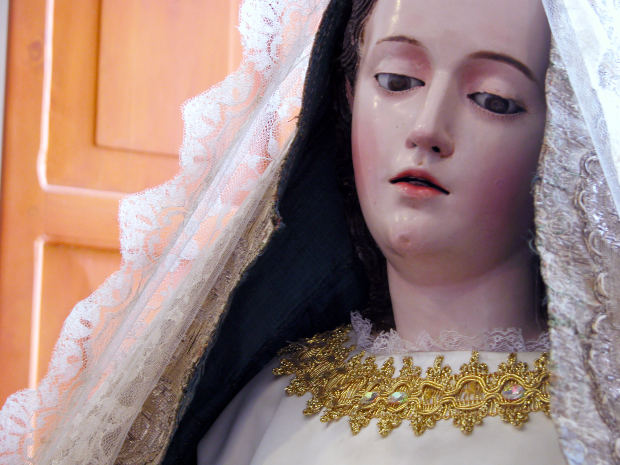 The night was darkened, except for the full moon, echoing throughout the entire region of the beach’s shore.  I live near the beach and take nightly walks, but this is my favorite time of the month: the full moon.  How I love to look up and see its pale face gaze back at me as my shadow gleefully dances in its white glow.  I know this may sound quite maddening to you, but I love the moon.  I feel a strong pull towards it.  I always have, ever since I was a child.

As I watch the waves roll gently in the moon’s pale gaze, I see something that I never have seen before rise up out of the water.  Living on Edisto Beach my entire life I know all of the creatures that stay in its alluring splendor. However, there was this creature that looked as if it was singing; a woman-like figure almost. I noticed her hair was blonde white and her eyes were blue grey as I got closer. I heard her words, echoing throughout my ears.

“How doth the sun rise? How doth it fall, on the beach-shore twilight I recall?”  I looked and say that she held a man in her arms as she floated and got closer to the shore. The man I couldn’t see, until I approached as close as I could, going behind a sand dune.  The creature kept singing, her tone much more desperate and eerie with each line.  I watched as she fumbled clumsily with the man in her arms onto the shore.

The creature had a tail.

This man who was dead.

I gasped as I watched the mermaid cry out; her singing so heart wrenching and horrifyingly sad you could cry as tears ran down her face.  I watched as she sat on a rock and held the man.  She held him tightly until she had to let go.  I wondered how she would react if I suddenly appeared.  I suddenly peaked my head out slowly and calmly, trying so hard not to make any sudden movements.  All of a sudden she looked my way with one sharp turn of her head and hissed.  I backed away slowly.

“I mean you no harm, dear Siren I swear, I was just walking and had seen you right there; curiosity had gotten the best of me, so I had come and hidden from thee…”

Her gaze had lightened into a curious look as I slowly walked toward her.  She backed away some, and so do I, so I sang as I walk to her.  She stayed where she sat and we looked each other in the eye.  She had a pale blue tale, her skin the color of the moon.  She looked at my legs and touched them, seeing as she had none.  I wondered on her thoughts.  I wish she could tell me them.  How strange this night has become…

We stared at each other for a few moments and I finally sang a question to ask her.

“From whence have you come, and whence where you go?  How did this man come to die with you so?”

“I come from the sea, such a midnight blue, from three thousand years ago too.  I hope that you shall grant me leave here as this man has died in a shipwreck this year.  I tried, how I tried, to save him so, but how it was fated; death was his foe…”

Her song was melancholy.  How it made me yearn to cry….

“What was your acquaintance with this young man? And how did you save him and bring him to this land?”

“The lad found me on a beach just like thee; we fell in love and things felt so free… until the day the storm had arrived….” Her song had stopped and then restarted. “…then his ship sank as I watched him die….”

I looked at this Siren.  This creature before me was in love with the young man lying on the ground, his dark brown hair and muscular arms laid strewn across the shore.  She had loved him.  How I thought back to when I was a child of the Disney movie “The Little Mermaid”….  It hit me… how ironic that this poor Siren would never grow legs, become human and have her prince charming… a melancholy story full of sadness and heartache.

I left the beach that night with a chocolate mothball taste in my mouth…  My poor little mermaid will never get to be with her prince charming.  I still walk in the moonlight along the shore, listening to her songs and occasionally seeing her glance over as I walk.  I wave and then she dives into the water once again, playing hide-and-go-seek in the pale moonlit waves.  I still hear that one song she sang to her lover, the one that had died in her arms.

“How doth the sunrise? How doth it fall, on the beach-shore twilight I recall?”