You are here: Home / Love and Romance / Her World of Love – Short Story Love

Foreword: Schizophrenia is a heterogeneous syndrome characterised by perturbations of language, perception, thinking, social activity, affect and volition. A person in such a stage undergoes various hallucinatory experiences. He or She may hear colours, see sounds, smell emotions and experience various such extraordinary behavioural changes, which in medical science is considered anomalous and is based on various  theories, the dopamine theory being one. This particular story is a fictious representation of the feelings, emotions and supra-perceptive abilities (which otherwise are considered false and aberrant, as they do not exist in an objective reality) of a schizophrenic girl, Rhea, who longs to be loved but doesn’t realize whom actually she does. Thus she is caught in the whirlwind of Love itself. The following scene is, from of a room where she is kept, at a Psychiatric centre. 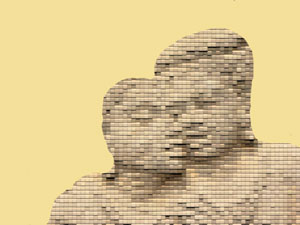 My Room had four doors. The sky overhead rained and snowed as it wished, and in dusk, withered petals showered down, with the advent of night, spreading its blanket of sleep……….. leaves as well grooving to the tunes of my guitar while falling from the heavenly trees.

During winter nights I would feel the growling sky-wolf, thundering down my throat, plucking petunias out of my breasts with its claws, leaving me in utter confusion—agony or ecstasy?

Swathes of sunlight basking on my ears, when there were days of extreme euphoric redness. I never liked the sound of it. I detested Red, but I loved Black although it was always tormenting. Its silence was displeasing yet sometimes it sang like Death does, when He visits me sometimes, when in adversity. I could smell His lust and never believed in His promises of eternal Love. Every time He tries to come near me, I play around and trick Him into leaving. Only once did He trick me into kissing Him and I could see the mustiness emanating through both of our nostrils, He sucked me into Himself. Good that I pushed Him in time, saving myself from muckraking, as the man in the white shirt always accused me of.

One day, after a fresh shower, I was listening to the various colours of the rainbow, singing harmoniously to the tunes of my soul, I suddenly realized that it was time for the “Colour-Man” to visit me. A smile appeared on my face and stretched across my chapped, already torn lips; it pained though.

I swayed, my feet hardly touching the ground, my hands extended, eager to touch the door on my left. I stood there for more than an hour, my hands pressed gently against the knob until I felt His hands touching the door. I opened and found Him smiling there, wet and naked like a work of art, His body felt like one of Michelangelo’s masterpieces. I could never see Him but heard His colours speaking to me in verses of pain and love. Yes, He was in love with me and so was I. He splashed me with pink whenever he felt happy and black when sad, never knowing that his beloved had slowly turned to be a masochist by being an admirer of the tormenting Black.

On His chest grew green ferns enveloping me while I kept my trying to keep my head over from being smothered. His hair smelled of silver, dancing and ruffling me as I hummed a silent song. And when in love, I moved my fingers over his pink body, taking them lower, touching and feeling every delicate curve on his lemony back, and then still lower, to where I could hear the blue water bubble with delight and in embarrassment.

It was time for Him to leave. And as usual with a vermillion kiss on my forehead He left in a vanishing act. He never needed the door to leave…always used the left one to enter.

I became sad once again, melancholic drops falling from the sky overhead. I watched the sky as it slowly turned crimson…the colour of it ruthlessly burning and etching my skin. But the “Healer” was already knocking on the door to the right. He never walked and I always addressed Him as “Ether”. I could see His smoky figure engulfing me in shapes like tentacles of slithering desires; and healing my pain with His songs. His fingers seemed like uneven strings of my guitar. Every time I plucked one of them, I would see mists of different vibrations, in ethereal notes. They permeated every part of my body and His songs melted inside my soul. The orgasm was much more satisfying than that of the other two.

The third Lover-“Aura”, was the most eccentric of all. He always knocked in times of nightmares; on the door facing my bed. He was “Mute”, but smelled like a mixture of scents made from potions and flower-saps of Eden. We never needed words to communicate and express our love to each other. Never did I make Him realize that His silence was a limitation to our love. In fact, it made the whole process easier. I could love Him all the more…His various emotions simulating various fragrances. The smile smelled like raspberry custard, tangy, with a mixture of sadness and pain. Kissing Him felt like musk- the scent of a man, a sensation tingling all over my bosoms. Never did he express anger, even though I knew it smelt like that of ginger, irritating my nose. And the most unwanted and agonising part was His departure- which smelled of melancholia and nothing else.

Tears kept streaming down my sunken eyes and Death torturing me with His lustful eyes, again and again.

Finally the fourth door opened and the man in white entered…the smell of musk spreading desire all over the room, as He smiled radiating pink, penetrating me; and as He separated His lips, I could see His voice speaking in ethereal notes…

“How are you feeling today, Rhea?”

“And how would you elaborate your usualness Rhea?” He asked again, smiling back, his eyes twinkling pink behind His glasses.

“I just know that I am in love and I am not sick”, I replied back, tears quivering in indignation.

“And whom do you love Rhea?” He kept smiling, as he asked the dreaded question.

“All Three of them”, I replied fixing my composure and wiping the wetness off my eyes silently.

“Don’t worry, this shall pass too”, He held out His handkerchief, the creases on His palm seemed like the strings of my guitar.

“Is it true Doctor, that I am sick?” I asked the same last question.

“You just see, smell and breathe the world a little bit differently, maybe the way your heart wants, which is not at all wrong, but is giving a little bit of trouble to you and I am trying to shed it off, otherwise you are completely fine”

I always loved the way He crafted his words.

“And what do you people call this?”, this time I loaded Him with an extra question to which He answered a single word which I had never heard, and just didn’t bother to understand its meaning either.

The smile never faded, as he kissed my forehead- the vermillion crawling down as He did so.

He got up His chair to leave, as usual…just when I pulled Him back clutching his strong wrist,

“…And I call it Love”, I released him saying my last, for the session.

He passed His fingers gently through my hair, singing silent ethereal tunes, and left.

The last door closed until the next time.