You are here: Home / Love and Romance / A Far Cry 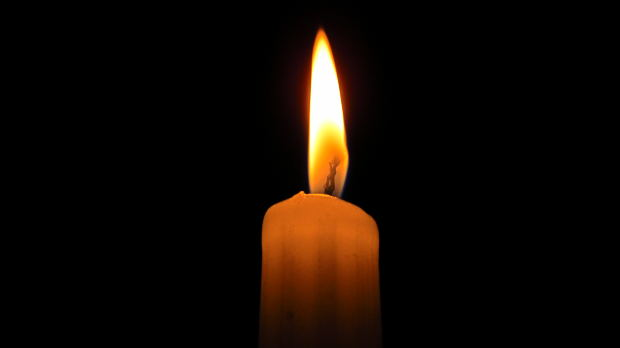 ‘The route seems to be totally devoid of traffic. I can speed up my accelerator’ were the words that ran through my mind while I was changing the gear from 4th to 5th. The speedometer started to fluctuate between 100 and 120. I adjusted the headlight to high beam, so that I would be getting the view of the road. Suddenly a huge beam of light flashed in front of me. The light made my vision blur and the next thing I remember was lying awake on my bed.

My day started with that dream. I got up and went near to the calendar to find out what day it was. It was June 25, 2006 second year anniversary for my love. I walked to the dressing table to get my mobile phone. I unlocked it and found nothing. No calls or messages. I then remembered that she might be on her way to the park, which was our regular meeting place. I rushed to the bathroom to get ready. As I was about to leave home, I saw my mother sitting on the sofa and crying. My father was sitting near the piano at the living room having his sad face. I figured out something. They might have fought again, which happens usually at my home. Without saying a word I left the place.

Kishangunj Park, the place where Priya and I meet very often. Priya has not yet arrived at the park. I spotted an empty bench below the tree. I went to the bench and sat on it, and relaxed myself. I started to recollect the old memories with my Priya.

Priya was two years younger to me. I met her when she was doing her final year B.Sc. Our meeting was totally aberrant. It was the cultural day at my college and we passed outs were invited for that function. There was singing competition and it was Priya who sang first on stage. I was totally allured by her voice. Being a musician, I always differentiate the good voice and the best voice and I found her voice to be the best. After the cultural program, I met her at the college corridor and spoke with her for almost three hours. I started to like her very much from that moment.

After some days I got a requirement for a lady singer. Instantly Priya’s voice came to my mind. I called her and spoke about the requirement and she was very glad to work with me. Days passed by and I started to like her a lot. Finally, I fell in love with her. It was June 25, Sunday; I opened up my love to her. She left the place without speaking a word as soon as I spoke out. I was irritated by looking at her reaction. That night I got a call from her. I picked up the call and I still remember those conversations.

‘Hello.’ I sounded quite nervous.

‘Hey…Hey…Just a minute. What makes you behave…..?’ I interrupted as I sensed some anger in her voice.

‘OK. Speak.’ I placed the receiver a bit away from my ear.

‘What made to you take this much time?’

No words came from my mouth. She loves me too. I was totally elated on hearing this.

We spoke for almost two hours over phone and soon went to bed. There was a song composition the following day. We met at the studio and after the composition, we had lunch together. That evening we went to Kishangunj Park and spent most of our time talking lots of things.

Two years passed by and I decided to talk to Priya’s parents regarding our wedding. I, along with my parents and two of my friends, went to Priya’s home and spoke with her parents. It took almost an hour to convince her parents and finally they agreed for the wedding. We fixed our engagement on June 23, 2006.

Couple of days later, I got an opportunity to go to Paris for a song composition. Priya accompanied me to Paris. Those fifteen days were total fun. After the trip, we returned home on June 20, two days before our engagement. We did not have much time for the preparations. To our rescue, our parents made everything ready before our arrival. We just needed to make some extra arrangements. Priya helped me out regarding those.  We had our engagement on June 23rd. Priya was no more my girlfriend; she has become my fiancée from then. The function went on well and the celebrations were exquisite. After our engagement, I took her out for a long drive.

I was waiting for her to arrive at the park. I was not able to make call from my mobile. I guessed there might be some fault with the service provider. I waited patiently at the park and after some time Priya arrived there. She was totally moody carrying her sad face. I immediately rushed to her and stood before her. She didn’t notice me, instead she continued to walk. I went near her and tried to hold her hand; I was not able to do so. I then tried to hug her, but I was not able to feel anything. I was not able to figure out anything. I was totally perplexed with the situation. I just stood there looking at her. She had some wounds around her face and the tears came out constantly from her eyes. I figured out that something was wrong with her. I didn’t know exactly what to do at that moment. All of a sudden I heard someone calling me from behind.

‘Where? Who are you?’ I asked looking at Him.

‘Humans named me God. I am here to take you with me. It’s my duty.’

‘(Smiling) Kidding? Child, right now you do not belong to this world. You have to come with me.’

‘What are you talking? What’s happening with me? Why couldn’t I speak with Priya?’

‘Because you are dead and I have come here to take you to heaven with me.’

Then it struck me. The flash light that blurred my vision, while taking the120 km speedy ride in my bike with my fiancé being the pillion rider, caused me death. We were coming back from the long drive on the night of our engagement. We found that the road was devoid of traffic and I decided to speed up my bike. Suddenly a flash light appeared in high beam before me and I lost the vision as well as balance. I fell down and rolled on the road. Suddenly I had a big blow on my head after hitting on to the post. I was dead in an accident and Priya has survived it. I then realized it. I then realized why my mother was crying this morning. I then realized why my father was having a sad face. I was dead and now I have to make my way to heaven. I looked at the God. He smiled at me. Without saying a word I walked with him.