You are here: Home / Love and Romance / If Only 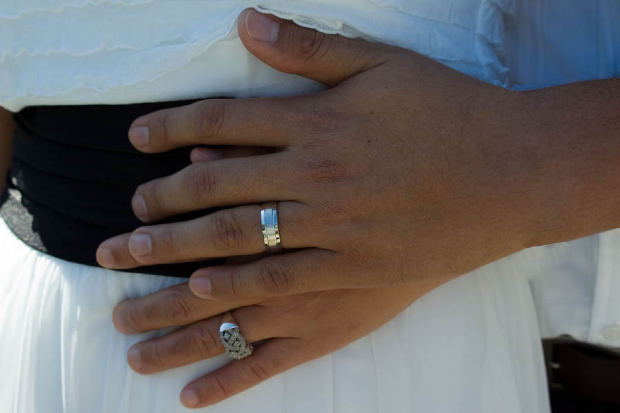 The year is 2034. Two middle-aged men are sitting on a bench in the middle of their local park. Another middle-aged man is feeding the ducks. A young man is jogging up and down, various people are rushing about with prams or are out walking their dogs. The sun is shining and it gleams off the two old mens’ wedding rings. One of the old men looks down at his wedding ring. It brings back a flood of memories.

Casey Anderson sat on the side of his bed. The 26-year-old was getting married in a few hours time and he was having second thoughts. Taking his tub of face cream from his bedside table he thought of what he had seen last night. His fiance Ben kissing another man. And not just any other man. Him. Lee Westbrook. Ben’s ex. The pair had dated in High School for two years long before Casey had even met Ben but had remained friends. And it wasn’t that Casey had been jealous. He had trusted Ben completely up until last night. Now that trust was all gone and he was beginning to understand what people meant when they said that sometimes love might not be enough. Flicking the lid off the top of the tub of cream he began to get ready for a wedding he wasn’t sure that he was going to go to.

Ben Hudson walked to the door to answer it. He could see Lee’s shadow through the door’s glass panels and it caused him to recall the incident last night when he had kissed him. Guilt flowed through him. He knew that he loved Casey more. That’s why he was marrying him after all but he couldn’t help his feelings for Lee. He wasn’t sure that his feelings for him had ever went away. He answers the door.
“Lee, you shouldn’t be here …”
“It isn’t too late to back out. You are not married to him yet.”
“I love him. Last night was a … mistake.”
“Then why are you hesitating?”
“I’m not. Look I am marrying him today and there is nothing that you can do about it.”
“No but you can. Come on Ben, I love you. You love me. We can make this work.”, Lee says placing his hand gently on the side of Ben’s face.
“No Lee. Stop.”, Ben says taking his hand away from his face.
“Do you think I like doing this?! Turning up at your house on the morning of your wedding?! I hate myself for it but what else can I do? I need you. I am going out of my mind here. The thought of you not in my life makes me feel ill. I couldn’t bare it!”
Ben sighs.
“Come on in.”
He lets him in and closes the door. They walk into the living-room and sit down on the sofa.
“Do you think it is possible to love two people at the one time Lee?”
“I don’t know Ben. I’ve only ever loved you.”
“It’s such a deep emotion; love and to feel it so deeply for two people and to know that you can’t have them both …”
“No you can’t.”
“I know that. It’s just that it’s going to hurt either way and I can’t see where I’m going to be in twenty years time. What if I make the wrong decision?”
Lee takes Ben’s hand in his.
“I can promise you that I will stick around. I will be there for you …”
“I know but I know he will be too. I’m so confused and I don’t know how I’m going to feel about either of you in twenty years. Will my feelings wane for one and not the other? I’m sorry. I shouldn’t be really discussing this with you …”
“It’s OK. I won’t get hurt. You can talk to me about anything.”
Ben took Lee into a hug.
“You are an incredible man. You don’t need me. You only think you do.”
“I know I do Benny.”
Ben held him tighter into his chest. There Lee listened to the beating of his heart. The perfect silent rhythm. It sounded like the most wonderful sound in the world to him.
There is a knock at the door.
“Who’s that?”, Lee asks.
“I don’t know.”
“Ben we need to talk.”, came Casey’s voice through the letterbox.
Ben jumped off the sofa in fright.
“Lee, hide.”
“Fine!”, Lee replied angrily and stormed off to hide in another room.
Ben went to the door nervously and answered it.
“Case what are you doing here babe? It’s bad luck to see each other before the wedding …”
“Oh I don’t believe in all that! Listen Ben, I seen you last night.”
Ben lets him in.
“On my stag?”
“With him.”
“With who?”, Ben asks but he knows who he means.
“Don’t. Just don’t.”
“Don’t what?”
“Play all innocent with me. Lee. I mean that I seen you with Lee.”
“Well he is my mate. He was part of the stag night …”
“Kissing him Ben! I seen you kissing him!”
There is silence for a few moments before Casey breaks the silence.
“Ben, will you man up and speak to me?! I’m your boyfriend! I deserve an explanation.”
“It just happened …”
“It didn’t just happen though, did it?”
“What do you mean?”
“The way you held each other. The passion. How long have you been in love with him?”
Ben sighs.
“I love you too, you know. It’s complicated.”
Tears come into Casey’s eyes. Ben tries to take him into a hug but he pulls away.
“Don’t cry. I am so sorry. I don’t want to hurt you.”
“Do you still want to marry me though?”
There is silence.
“I don’t know.”
“I still want to marry you.”
“Don’t you hate me?”
“Yeah but I love you too. You are everything to me. Leave with me now if you feel the same and let’s get married.”
Casey extends his hand for Ben to take hold of which he does so and they walk from the house.

Staring at his wedding ring, Ben thinks about the conversation once more which he had with Lee. How he had spoke to him about been unsure whether he would make the right decision and be able to stick by it twenty years from then. Now he knew the answer twenty years gone on and he regretted the decision he had made all those years ago. He looked at the man sitting beside him. He wasn’t the man he loved now. He then looked over at the man who was feeding the ducks. There was the man he loved. Looking at the wedding ring on his wedding finger he was tore up with jealousy. He wished that he was wearing his wedding ring. Not his husband Tom’s. But times had moved on from their younger days. Both of them had families now. Ben and his husband had two sons while his love and his husband had two daughters and a son. And while Ben certainly didn’t regret his two sons he did regret marrying his husband. As he watched his eldest son jogging like the fitness freak he was and indeed he himself had been when he was younger he hoped that when he found the right girl he didn’t make the same mistake that he did. The same with his younger son who was in High School at the moment. He hoped when he met the right guy he didn’t let him go like he had. His love could have been his. He regretted coming back to the house that day. He regretted leaving Casey standing outside the Registry Office. He regretted choosing Lee. And yet what was done now was done now. And all he could keep thinking was if only, if only, if only …