You are here: Home / Love and Romance / Last Meeting 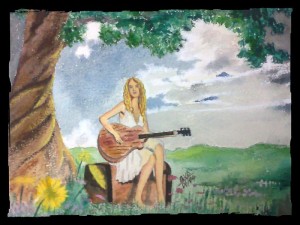 I know that you’re the best artist this country has. I’ve seen your work and I fall short of words to describe the kind of fascination I have for your art. All I can say is that never in my entire existence have I seen anything more beautiful. I have a request for you today. Now that you know the impact of your art on me, I want you to draw me with the passion that I see in your masterpieces. I’ve send a picture of myself along the letter with the hope that you’ll fulfill my dream.

p.s: put the sketch in the first letterbox you see, two towns ahead”

She put the letter along with the picture in the envelope and sealed it.

“But you didn’t write your name lily” said Lisa, her sister

“I know” smiled Lily, as she ran out to post the letter

His frown deepened with each passing word. He had always thought that his work was nothing as compared to the other artists he’d seen. He thought no one liked his work because no one understood it. They were deep, conveyed things far beyond what words could tell, they were dark and mysterious, just like he wanted. But most of all, they were troubled just like him and for that reason he found his work unappealing to many. He couldn’t understand that how could anyone talk about his work with such passion, it was new.

“So, what’re you going to do now?” asked Mourad, his cousin who was reading the letter as well

Alberto stared at the photograph. It was a girl, no a beautiful girl. She wasn’t the most beautiful one of all those he’d seen, but there was something about her that just drew him in. He kept looking at the picture, as if trying to memorise each and every inch of her. A pat on his shoulder broke his train of thoughts.

“I asked what are you going to do about this?” repeated Mourad

“What! she sounds like she’s in love with your work and you know how it is. I don’t know man, I just don’t think that you should do it” Mourad knew Alberto. he knew that Alberto had decided to fulfill the girl’s wish and there was nothing he could do to convince him otherwise

Alberto spent the whole night sketching the girl, getting every detail just perfect. With each stroke of his pencil, his desire to meet the girl increased. With each stroke, he knew that he was wishing for a story that he could never have, a story that had happily ever after. His art was a saviour from the dark world he grew up in, every work contained a piece of himself. But this time, he wanted the masterpiece to have all of himself. No matter how hard he tried, he couldn’t stop thinking along those lines but at the same time knowing that it was a road to nowhere. He was disappointed that he didn’t even know her name.

The next morning, first thing he did was keep the letter where she had told him to. He hoped that she would reply soon and couldn’t wait for it.

Lily received a letter from Alberto just two days after she had send her letter. she couldn’t help the tears that escaped her eyes as she saw the sketch. It was an exact same but somehow an even more beautiful replica of her.

“This is the best I could come up with, but I know that no stroke of my pencil could ever do justice to your beauty.

she jumped with joy on reading those words behind the sketch. She had always felt a strange connection to his work but now his words made her feel a deep bond that connected them. A bond that grew stronger with each word and each time she read those words.

I was the portrait and I loved it so much. It is absolute perfection and I know no one could have made it like this except you, so thank you very much.

I want to see you Mr. Alberto, can we please meet even if its for just a few minutes. Please don’t say no, I promise that’s the last thing I ask of you.

her hands shook wile writing the letter. She knew it was a big thing to ask as she didn’t even know his name, only knew his pseudonym and didn’t give him her name; but she wanted to put a face and a name to the person she adored the most in the world.

meanwhile, Alberto hadn’t stopped thinking about the girl and was very happy to see the letter from her. But his smile faded as soon as he read her words. He couldn’t believe she wanted to meet him. The letter made him realise what he was getting himself and her into and how fast things were going. He had only seen the girl a few days ago and already couldn’t stop thinking about her. He also knew that he couldn’t fall for her, someone like her deserved the world and not someone who couldn’t even hand;e himself and his shitty life. But no matter how hard he tried to convince himself otherwise, he knew that he wanted to meet her, even if it was only once.

After much contemplation, he wrote a reply.

“Okay, but I can only meet you for two minutes and I have one condition that after our meeting you’ll never write to me and neither will you try to meet me

And with that Alberto decided that he would not let the girl ruin her life by becoming a part of his. He decided that the only love he was allowed was his love for art.

Lily was shocked to read Alberto’s letter. She couldn’t understand why would he demand such a thing, she had thought that they would meet and get to know each other; of course she had thought he would be busy but then hoped at the same time that he wouldn’t. All her hopes were crushed with those two lines by him.

She spend the whole evening in her garden, thinking what would happen if she didn’t go there. wondering, if he would stop replying to her letters altogether or if they’ll just lose their connection without having a name and a face to each others words .Then thinking about the consequences of meeting him, which would mean never talking to him again or seeing him.

That evening was the longest evening of her life and that that decision the hardest.

Saturday came pretty fast and so did the time that was about to change her for her entire life. She got ready and left the house to reach a little before time. As she entered the, she heard the laughter of the kids running around and playing but that did nothing to calm her racing heart. She wandered a little bit around the park until it was 4 pm and then went to sit on a bench near the entrance.

She was startled by a tap on her shoulder and saw a tall, handsome man standing behind the bench. She noticed that the man had a scar near his ear, nonetheless he was easily the most handsome man she’d ever seen and straightaway knew that it had to be Alberto. He came forward and took a seat beside her and stared at her for about a minute but then shifted his eyes to the children playing nearby.

Lily cleared the throat and started “hi, I’m Lily” and put out her hand.

His handshake was firm but gentle at the same time and made lily not want to leave his hand. unfortunately that was short live as he pulled his hand away and stared into her eyes. Lily noticed that he had warm brown eyes and the sun made them look like the colour of molten honey. They were nothing but beautiful.

Suddenly he broke the stare and pulled out a pen and a paper from his pocket.

“I’m Sebastian” He wrote and offered her a sad smile, a smile that said everything the mute man couldn’t.

Then he just stood up and walked off, away from her. Both with tears in their eyes.

They both never saw each other after that, but they knew that they would always have each others heart with them and they could spend their entire life with that.

That was a bond deeper than any words could have made, that was an unbreakable bond of souls.