You are here: Home / Love and Romance / Love you Senior 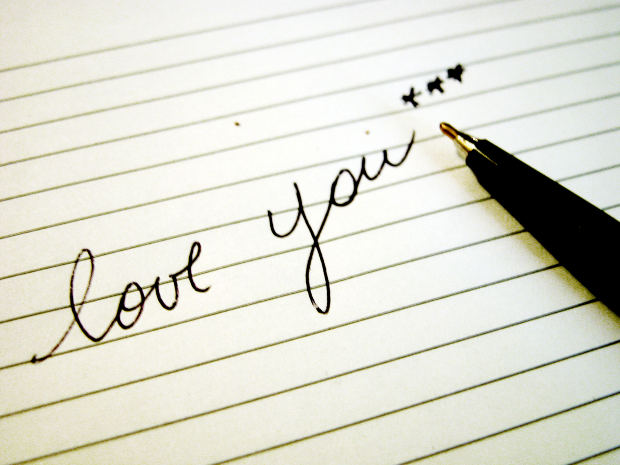 After completion of seminar , I was moving into my department to fetch my bag that was left in the classroom. Suddenly ,I heard someone calling Siddarth!Siddarth! . I turned my head in various directions to find who called me. I found someone sitting in the chair wearing black shirt and blue jeans with fairy face showing gesture through his hand to come towards him. I was thinking who was he?

Moving towards him I remembered that I met him in CAD lab. Do you remember me? he asked.

“Yes I remember, I asked you some questions in CAD lab while you were do your project work. sorry,I think i disturbed you while you’re doing your project”.

” That’s ok”,he said. Asked me whether I can join him in discussing something. I told within couple of minutes I’ll join.

Now when I came back saw another person chatting with him who was some what fatty with funny face. They offered me a chair asked me to sit . I sat on the chair by dragging towards them. Then that fat person asked me ” what is your name?” .

” Siddarth” I said. Promptly, I asked them what was their names? They both looked at each other and laughed. That black shirt person telling someone who was coming near to us that this poor junior asking their names. Now situation is getting obvious these persons are seniors they were trying to rag me. That person came towards me and pulled my ID card that was hanging to my neck. That third person is having beard and looking weak having some books in his hand .The beard person asked me to give my introduction. I started giving them my introduction and someone among them would interrupt ,demanded me to start from first.

After 9th times of telling my introduction i have found 6 men surrounding me and a girl was asking these men who was i? i thought that she was coming to give me freedom from this ragging. In fact a beacon of  hope.She was dark and skinny having dairy milk silk chocolate in her hand, i fancy someone gave her as a gift.I am pleading those persons to give me my ID card without that from security guard to principal would detain me or slap a fine. Now situation is  getting worse, they were discussing something else to nip me. That skinny girl came towards me and told me that they would give my ID if i do something they ordered . I told them i would do without any second lost. She called all their fellow students ,they said ” You have to propose a girl “.

Until then i have never done such a thing in my life, nor that kind of feeling came to me. I’ve seen lot of girls who are gorgeous but i never thought I would propose them. Now they showed me a group who were discussing among them, consists of two girls and a boy on the third floor of my department. They told the girl name was “Ankita Vasudevan” .

The fat person gave me a paper flower not exactly the one, he made a flower with paper which resembles a flower to him . Now they asked me to go. various thoughts ran into my mind ,predominantly i have decided one idea to follow.That  idea was to run away when she raised her hand to escape from slapping. Now i crossed first floor, i saw those people who were shouting in the department of course that was non working hours so no professors were there in the department only students were there watching my crazy act.

Now I entered into third floor, my heartbeat was racing,I am scared. I saw those group who seemed to be waiting for me, they looked at me . I asked them who was ” Ankita Vasudevan” without seeing their faces.

I heard the girl saying” it’s me”.

I stooped and kneel downed  raised my head moving my hands quivering forward with paper flower ,I said ” I LOVE YOU” .

In front of me a gorgeous woman with white dress .Her hair was loose and wind was obstructing her vision so she tried to move her hair with hand to see me clearly. I was deaf and was in intention to hear no voice.She was smiling at me, that smile made my heart slit. I am impressed.she was coming towards me and her hand raised,as my idea was to run away the moment she raised her hand. My heart says this is the girl i have get hitched with or love.I decided to be determined whatever she does.

A sudden blow hit me i fell down. I looked at her she was shocked,where  hands  on her mouth closing it. Beside me , the boy looking fiercely as if he would kill me. She was pulling  him back calling” Naveen leave him”.

He demand me to wait here ,till he come back . That girl was pleading me to go away. I was in no position to hear her, mesmerized by her.

The seniors in down floor were enjoying that they made me “blacksheep”, asking naveen to leave me . But naveen who until then i don’t was her lover was adamant.

” How dare was he telling” i love you” in front of me to my girl friend?” Naveen fumed .

But i  was not black-sheep , in fact i would thank my seniors to showed me a girl who would win my heart. Seriously i mean it . They gave my Id asked me to go away .Now i was not going , they were forcing me to leave the place. But this time am adamant. she was beautiful,that is true ,undeniable truth. I spent one year in department , I have never got a occasion to meet her or see her. I heard from my friend that there was a girl in final year who look gorgeous and great.But I downplayed it.Now I proposed her may be in funny episode but I mean it.

Sadly that was their last working day and those seniors who thought have fun for the last time through ragging showed me a girl. Their fun became my life turning point. So always respect seniors they will show life to you .Now I came to know she left aboard to study her masters, hope i can go there. People say destiny prevails, but I have to prevail upon my destiny to move with her.