You are here: Home / Love and Romance / Old Man in Love 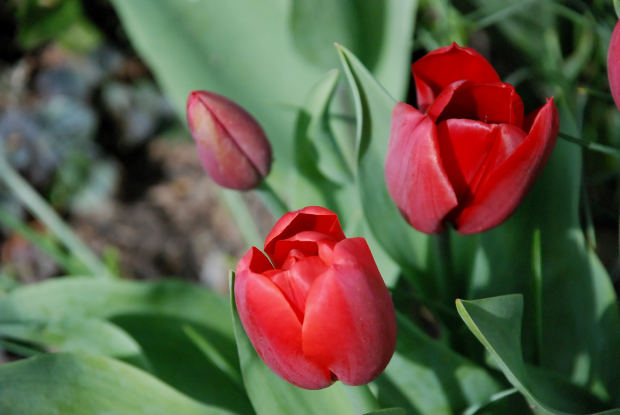 He is sixty to sixty five. He is single. He did not marry because he did not get success in his love affair.

One day she knocked the door and asked him, “Do you need flowers sir? I will come daily and give flowers to you.”

He saw her who is young, beautiful and smiling.

“I want different flowers.” He said.

“I don’t want these flowers you sell. I want the flowers that you don’t sell to others.”

She looked at him with anger. Her eyes look like two guns to fire straight in to his heart.

“I sell flowers sir, nothing else.”

“I want to buy your flower-like-smiles. I love you. May I know your name?”

She was really very angry. She saw many people who speak like this and try to tempt her for having her.

“I am name less for people like you, because you need not call me for anything. You are not for me.”

“Don’t be stupid. My brother is a roadside rowdy and he will kill you if he knows about this bad conversation.”

He knew that she is not married for a long time. He wanted to know the reason by asking her mother.

“I want to marry her. I am doing good job and I can see that we live happily.”

Her mother looked at him.

“You are a fool. She is already married and her husband is in jail for two murders. If he knows about this, you will be third one to be murdered by him. He loves her so much.”

“I don’t know about this. When is she married?”

“She is married two days back. On the same day, before her wedding night, he came to know about two men who asked his wife for one night. He immediately went to them and killed, within hours he is jailed. We all feel sorry for she is married with a wrong guy.”

“Why you unnecessarily worry? I will marry her and take her to a remote city to live. I have good money with me.” He said.

Her mother arranged a meeting for him with her daughter.

“I don’t like him who killed two innocent people. I remember you. You would have been killed if you have advanced in your love with me. I know, you love me and you are ready to take the risk. But I am not ready.”

“Do you think that he will come from the jail and you will lead happy married life?”

She looked at him with a little anger.

“Do you think that he will die in the jail and I will marry you?”

Months and years passed. She lost her husband who is dead in the jail.

He was feeling sorry for this and he is yet loving the flower girl. So he went to her and asked her to accept him as her husband. Her mother also insisted to accept.

She was not in a mood to accept,

“I am unlucky. If not I will not lose a man who cared for my safety. He killed the two for my sake. He lost his life for my sake. So I don’t want to marry. I will be unmarried lifelong. Please don’t compel me and don’t come to me again with a marriage proposal.”

As she said this, he felt unhappy. He is also decided to be unmarried all his life.

Now he is old. She is also old.

One day he saw her selling flowers in her shop.

His eyes are filled with tears.

“Your hard decisions made our lives dry. We are two fools who lost the youthful life for no reason.”

She was very seriously thinking about his love. She now realized that she doubted him, so she lost a good proposal and they both are at loss, living unmarried with no comforts.

She immediately accepted for marriage with him.

People in the city are wonder-struck at their marriage. It is first time for them to see old couple in marriage.

They are married. They are over excited at their marriage.  They met in their first night with a lot of over excitement.

The other day, the doors of their house are made open breaking the doors. The old man and the old woman in love finished their life journey with one night of their long awaited married life.