You are here: Home / Love and Romance / Time… 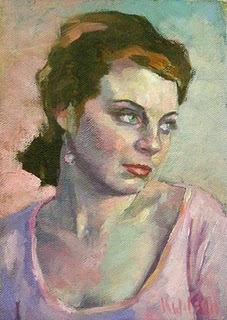 “Ms. Anahi, don’t you think we’re getting late for the meeting?” James told me as I was giving those finishing touches to my makeup.

James is my driver, assistant and most importantly my well-wisher. Despite being young, handsome and the favourite employee of my boss, I’ve always wondered why he refused to have any girlfriend. “James you’ve to take me to the airport immediately and please inform the house keeping department to get the framed canvas from my study”.

As James went to inform the house keeping department I thought of wearing my favorite designer heels. “Ms. Anahi, here’s your framed canvas!” His glare was enough for me to understand that he wanted to know the reason for cancelling the meeting.

“James, I’m in a hurry, I’ll explain to you everything on the way.” I got into the car as I told him.

On the way I explained to James about how my high school friend who’s an airport manager now, had called me and informed that my long lost friend was waiting to catch a flight to London in two hours and I’d to return this framed canvas to her. This was officially the first time I’d witnessed James’ curiosity as he asked me why I wanted to give away such a favorite painting of mine. My excited smile and eyes faded to guilty looks and I looked out of the window trying to set my burden free.

Listening to the sound of water dripping on the car roof and staring at the framed canvas on my lap brought up all the unanswered questions from the past. It all began on a regular high school day when it was Erika’s birthday. Everyone crowed near her to give her a present. Erika was a popular girl in school. I always admired her beauty. How she would walk on designer heels with tac-tac sound so confidently. I didn’t have anything to give her; in fact I’d never even spoken to her before and since today was her birthday; I thought of breaking the ice. I gave her my chocolate bar. “Happy birthday Erika…this is for you.” I said awkwardly staring at her wondering how someone can be so pretty. “Oh Anahi! Thank you so much,” she said smiling.

Same day after school she came to me and said “Anahi, honestly I found your gift was the best. I saw how you felt for me.”

I never imagined that Erika would be so sweet. Before I could tell her something she continued “Want to come over to my house now? We’ll watch movies and have fun…besides my parents are out today…”

It felt like there was only one puzzle piece left for an almost solved puzzle and I’d to fit that piece into the correct position. I said yes.

Erika’s house was full of canvas. Since she belonged to an artistic family she’d to inherit that artistic mind. Her room smelled like oil paint spilled in the carpet and left it there for years. She’d paintings all around her room, some framed, some covered by a thin tracing paper and only two of them were framed and wrapped in rough fulvous brown paper. We watched a movie and then we spoke till it was almost time for the sun to say goodbye. We sat in her balcony to drink cold coffee. I asked her where her parents were on her birthday…and she answered “my parents took my grandma to the hospital and it’s pretty far from the city…she’s suffering from cancer. I’ll leave this city day after tomorrow and start a new life in Paris, where she can have access to better treatment and I’ll get better education.” I felt she’d a sort of emptiness in her words, her voice…it felt she wanted something else…

Before I left her house, she handed me one of those fulvous brown paper covered canvas…without thinking whether the one she picked up was actually for me or not. “Here, have this. These two are my special ones, I felt that you’re a righteous person or should I rather say friend deserved my parting present” Erika said.

“Thank you Erika…no matter where you go I’ll always remember you…” I said as I took the present and left.

A day passed by trying to decide the proper place to keep this precious gift. I treated the frame like how I used to treat my first Barbie doll. Later in the evening I received a call from Erika…she seemed very nervous as if there was a silent killer behind her like those in the traditional horror movies. Her voice was croaky. “…Anahi I’m sorry to disturb you…but can you give me the painting back…I promise I’ll give you another one…could you meet me at my house at 12 noon tomorrow because I’ll leave at 1 pm for airport” she sighed.

“I’ll meet you at your house…” I said curiously hoping she’d tell me the reason why she wanted her gift back.

Next morning things didn’t go as planned. All of a sudden my sister was puking time to time…and I assumed from the little knowledge in biology that she might have had food poisoning. It was 11 am. I remembered previous night’s conversation with Erika. My parents were at work. I’d to take my sister to the hospital which was on a completely opposite route from Erika’s house. I’d chosen my sister. By the time we got to the hospital it was 11:45am. I kept looking at my watch…heart pounding…hands sweaty…could not carefully listen to nurse at treatment room. Then the hero entered to save my sister…and she’d to be admitted, and of course I’d to stay. By the time my parents came…it was too late. My punishment was to carry the guilt for seven long years…

The weather was cold and crisp outside. Staring outside I felt like I was a heroine in the big banner movie. There was background music of screeching tires and I banged my head as James lost control and plowed the car into the guardrail. We got out of the car and waited for the police to arrive and do the usual formalities. I allowed the rain to soak me as if I was the dishwashing sponge. James’s imperturbable attitude made me feel as if he didn’t care about it at all. The police siren gave me a ray of hope of reaching on time.

Fully drenched, I watched how the police was questioning James. I heard fragment pieces of James’ voice…bad weather…late night…speed…I’d to pay fine for destroying the guardrails. Thankfully the police showed some kindness by arranging a taxi for us.  I took the painting out of the wrecked car and sat on the taxi.  I kept fidgeting with the edges of the canvas. To my surprise one of the edges opened like a container and there was a small pocket. I felt stupid that all these seven years I never discovered this. James took out the grunge paper and read it.

“Dear Jamie, I love you and you know how much you mean to me. We’ve to get married tomorrow. I’ll be waiting for you under the bridge at Avenue Street at 2pm. If we don’t, my parents will make me marry my neighbor who wants my money only. He’s dangerously greedy…he can even kill me to get my money.-Erika”

James tearing up…“she called me Jamie with love…” I felt like my entire world was swirling around me full of doubts… was Erika dead…did her so called neighbor husband kill her…or did she even get married to him…what if my friend mistakenly thought it was Erika… I was shocked. Heart pounding I glanced at my watch…it was 1:55am.

Running though the rush and feeling those excited holiday vibes in the atmosphere; my eyes were hunting to find the plasma status screen. I ran through the security check points. Finally my eyes went over that closed counter and on top of it there was a status screen. Holding the big frame in my hand I ran towards the screen. It read “Date 9/08/2014…Flight JT578- Remarks…Departed to London…Time 2:00…” And within seconds the line I read on screen vanished. I took a glance over the boarding waiting area. Seeing all empty seats I went over to the large panoramic window. I pressed my hand on the window as I watched a plane taking off. I assumed Erika was in that plane and waved at it.

I saw his eyes tearing up…he couldn’t hold it back. In my head I was putting the missing pieces together…why Erika wanted the painting back was because she never wanted me to know about them. Why James never wanted girlfriend, had remained quiet all the time. James never received that letter which he was supposed to get. And I was the reason why they were separated for life. Maybe time and destiny played a very cruel game and we all lost against it.