You are here: Home / Editor's Choice / When Spring Never Comes 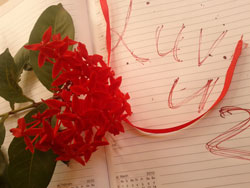 Dad  was  transferred,  as  a ranger  in  Corbett,  and  I  was  all  of  eight  then.  Leaving  Guwahati  was  painful  for  a  motherless  child.  Acclimatizing  was  difficult  and  taxing,  mentally  and  psychologically,  although  at  that  time,  I  hardly  knew  what  these  terms  meant.  Yet  I  had to make an effort to change my social and mental equanimity and lessen my longing for those left behind in the land of greener pastures, and bits and pieces of me as well. I often felt alone fighting with myself, and after a couple of months, realising that my strongest of retaliation wouldn’t let dad change his mind, I stopped soaking my pillows at night with my salty tears for company and yielded to let memories evaporate and fade away, like faint wisps of clouds melting against a deep blue sky.

Dad was allotted the bungalow number 23, D.D. Jain, Ramnagar, Nainital. The garden in the backyard was my only delight that I could pamper myself with.  Bougainvilleas, colours of pink, green and blue, rose shrubs, the smell of leaves, coy flowers, night blossoms and the old dead Meena, the banyan tree. One day, her remains were removed as if she was nothing but muck. Dad ordered Lakshman, our caretaker Kripa chachi’s son to cut her up, for better use, as firewood to warm the house and hearth. How ironical it was that I cried the whole night not realizing  Meena was dead long before…Dad simply did what was best, to use her as fuel. Does the physical presence of the dead make us feel that they are alive? I didn’t know the difference then.

The day after, I planted a listless gulmohar sapling, as dad used to comment, and named her Urmi. She was my best friend and company on my lonesome nights. I imagined she smelled like mother and hugged her every night before retiring, asking her to keep quiet and let me tip-toe back into my room, lest dad catch me and burst into anger, and suffer the anxiety of having a psychologically deviated daughter.

She grew as I did. Like her twin sister I could sense whenever she felt thirsty and quenched it always with my love poured in as well. One night, her leaves shook nervously and her branches trembled, I patted her trunk and rubbed her back lovingly to make her feel better as she expressed her deepest secret, of being in love. It was the boy I kept longing for too, behind closed doors and netted curtains, Lakshman. We loved the same person. He used to call me memsahib, but I always kept my eyes low, never being able to meet his brown ones. He had the body of a centaur, and the scent of a musk deer. I never noticed how he slipped into my half closed heart, without as much as a single meaningful conversation, little realizing, that I dreamt of him every night, of talking to one another, kissing and making love so vividly, that it actually seemed real.

He would come every morning to the garden for the flowers and Urmi used to sheepishly observe him collect them, painfully lowering her trunks without anyone noticing, for him to reach for those beyond his. He made garlands out of it, to sell them at the local market for half the price of his labour. During afternoons, after my college, I would see him sleeping under Urmi’s shade as she fanned him lovingly with her leaves, thanking the gentle, yet fickle wind for aiding her, and sometimes cursing it, when it stopped.

Finally I thought of giving up on my hopes of Lakshman. He was Urmi’s. It is a common tendency for us in most cases to express love to the one intended for, but here it ran a certain risk, for Urmi’s sake, the risk of me winning………“the fear of being loved back”. Urmi was free from such human complexities. She existed and knew only to give, not to receive.

One night while tossing and turning in my bed, driving away dreams that lulled me earlier to sleep, now of late deeply disturbing, I woke up, startled, to screams and noises of people running in anger and fright. The sight from the veranda was that of horror, something my mind wasn’t prepared for. Lakshman’s hut had caught fire. My instinct was to run for the open fields, screaming in agony, as if my heart was caught up in that fire, just when, as always, dad came and held my hands, so tightly that I couldn’t move my fingers. I kept on screaming, trying to fight back tears, in vain, tears that raged their own battles against me, only to overwhelm completely……… I fainted.

The last night’s aftermath was the biting chill in the morning news, like winter winds carrying their  coldness within, into my room, when dad, without any expression, declared that Kripa chachi had died. They couldn’t save her from the fire. I knew who they were busy saving……themselves. The thought of Lakshman crossed my mind. Dad read it, “The boy is alright”, he said. In spite of it, I couldn’t react, and silent tears fought their way back again.

Winter came, and I asked dad, if Lakshman could stay with us till he reconstructed his old hut, to which he strictly answered “No”. I thought it useless to argue. My only hope was Urmi now. It was time for her to shed her withered leaves, to bloom once again in spring, but she was tall and there were still leaves left to cover….. Love. I asked her to protect Lakshman from the cold, she agreed, as she was far more in love with him than I was.

That night can perhaps only be imagined. While I wrapped myself warm with the quilt and the heater to keep away the chill from a cracked window pane, Lakshman slept under Urmi. She covered him with all her branches bending forward, to make the leaves close in and shelter him. The wind began howling, slapping her with sharp gusts, perhaps taking its revenge for all her curses uttered. The sky too was ruthless, and in connivance with the wind that night, started snowing. Flakes started to numb Lakshman’s hands and feet like needles piercing all over his body. Urmi wept in pain, but tried yet harder to protect Lakshman. He started trembling. The cold was becoming unbearable. Urmi thought of giving up. With one final effort, she shed all her remaining leaves and flowers to make a blanket for him, until she was completely naked, now shivering herself and crying in pain, unable to comfort her trembling lover. Her branches quivered helplessly as the snow covered the blanket that she laid down for her lover. If only she could brush the snow away, if only…..

The bright sun greeted us the morning after the night before took its leave, like some bad dream. Out in the garden there was a huge mound. The snow was beginning to melt and Urmi was completely naked. Coming closer I couldn’t believe what I saw and screamed a shrill cry that brought dad running to the spot. He knew, how much I loved Urmi. The heap of leaves, flowers and the snow surprised him too. He ordered the servants to dig it up.

Underneath was the blue faced centaur, Lakshman. His heart had stopped beating, surrendering to the cold. His body had turned pale blue, and over his legs and hands Urmi’s roots  had sprouted out of the earth in an attempt to embrace and comfort the trembling hands and feet of her lover, now so still. I couldn’t speak, I lost the ability to express it in words. I was the lifeless tree now.

Urmi however was alive, though sore and naked. They (the servants), tried hard to remove the body, but couldn’t untangle Urmi’s roots and her embraces of love. So dad decided to burn the body along with Urmi. I tried to scream in protest but there was silence instead.

The pain of despair was excruciating, my body was burning too, in flames of agony, as Urmi’s was set alive with Lakshman’s body to fire. I became paralyzed with helplessness as dad held my hands and my feet went numb. I saw the two bodies burning away in flames and clouds of foul smoke emanated from the pyre burning Urmi’s flesh. She kept quiet and closed her senses, burning away in love and I found my voice only to express it in screams, unable to save Urmi from being sacrificed along with the unrequited Love of my life.

…and now I am quiet again, like an unspoken, silent tree. I stand in the garden at the macabre spot and think of her, and Lakshman.

Dad tried a lot by to bring back my voice, speaking and consulting to different therapists, doctors, psychiatrists and healers; but I choose to be a tree; and spring never came anymore.