You are here: Home / Science Fiction / That Unusual Night 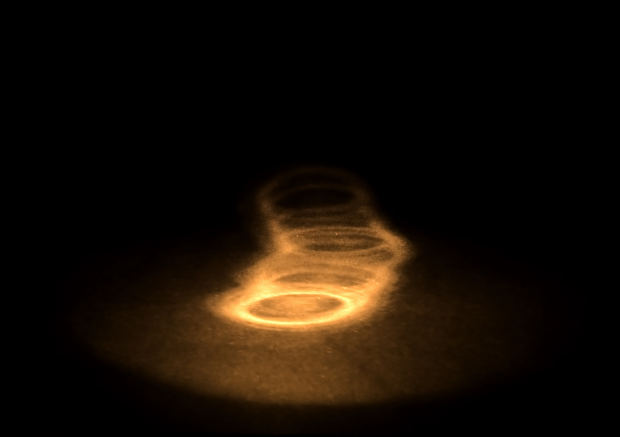 “Hey Abhi !! Come and join us for dinner”. Mom yelled from the kitchen while I was glued to the T.V.
“In a minute Mom..” I replied back. There was nothing good on it to watch and my favorite program was already over. So I switched off the idiot box and went to kitchen, washed my hands and sat on the dinning chair, waiting for next order.
“That was quick, I thought it will take you almost 10 minutes more, like everyday.” Mom teased me. I was about to defend myself but she ordered me to help myself with dinner food. I added two chapatis on my plate and Mom served the remaining items.
“Where is Dad ?” I questioned. He appeared out of nowhere. I helped him to serve his dinner plate. Next followed the normal dinner table chit-chat.

My dinner ended quickly than usual. The moment I got up. The tube lights flickered. I paused for a moment. Guessing all the possible reasons in the world behind the flickering. While I was yet to narrow down the reason, it happened again.
“May be something is wrong with the fuse.” Dad exclaimed concernedly.
“No Dad, its not just happening with us only.” As I was standing, I could see other houses beyond our fence walls having same troubles.
“Then no need to worry, its something we cannot handle. Let it be for a time while. But switch off the heavy gadgets.” Dad instructed. As I had already finished my dinner, so this responsibility directly came on me.

Swiftly but lazily I turned off some gadgets and at last, stood against T.V., my hands rejected the order to turn it off.
“Dad !!”, I pleaded in some hope, “T.V. too ??”
“Its in top priority to be turned off, so YES” His words felt like a cold blooded butcher killing will of a life to live. I turned it off. Now I was trapped in dilemma. I usually watch it before and after almost everything I do.
“So what should I do now?” I questioned myself, “Should I sleep ? No, No, its too early. Beside it is prescribed not to sleep immediately after dinner, you must do shatpaawli (means walking 100 steps without resting). That’s it.” I rejoiced, “I can do that.”

“Mom, Dad.. I am on roof.” I took the staircase and followed it. Soon I reached the top. I opened the door, stepped out and glared up. As if I opened a door towards heaven, I was completely brain washed by the beauty of nature. Thousands and thousands of stars, dazzling against the pitch dark sky. The moon, romantic yet lonely as ever, shimmering with a perfect beauty. Witnessing this appealing scenery, I started marching on the terrace.

‘Whats that thing ??” I questioned myself. A huge disc shaped object was floating in air, just couple of buildings away from me. Electric sparks were flying throughout its body, sending lightening bolts towards ground at irregular intervals. A horrendous chill covered my whole body.
As if I was dreaming or something, for a moment I thought that thing was heading towards me. Soon, I understood my thoughts are reality, and I found myself in an awkwardly strange place. As if some seconds from my life were stolen, I couldn’t remember how I got there. I brought myself to believe that I am inside that thing. And soon enough, I found that I was not alone. There were some handful of people there, frighteningly gathered at a corner, not knowing what to do, just like me. I have seen many sci-fi movies of aliens and I know for sure that one thing I should not do, is panic. Keeping that feeling compressed (somehow), I took a look around. It was a small uneven floored room with, I shouldn’t say that, pleasent smell. Everything I could see, was made of same material but couldn’t know of what it was. I thought its better to concentrate on something I know than wondering the unknown. To my amaze, there was a door, but had no barrier. Outside, there was a passageway. Thinking its waste of time to be here, I started marching towards the ‘so-called’ exit. As I was about to step though the gate, someone caught me by my shoulder. I breathed fear.

“STOP !! Its not what it looks.” It was a girl who stopped me. Her voice was shaky, yet calm.
“But why ?” My uneasiness was started to grow.
“There is some kind of invisible barrier, and it hurts.” She showed me her left arm, which was looking like sunburned skin, at maximum level.
“Err.. Thank you. You saved some pain of me.” I smiled weakly. “So where are..”

My sentence dissolved in a loud bang sound, and another person added to our crew. He was so terrorized that he fainted moments later. Some ran to help him, making the atmosphere more stressful. I watched the new recruit closely and recognized him. He resided not too far from where my home wasS.

Suddenly a strange body entered through the gate. He was an alien for sure, mostly built like human body, but face was more grossly than I observed in the films. Everyone rushed towards the corner, leaving the fainted man behind. For a quick moment I was purely horrified, but soon gained control over myself. Something clicked in my mind, how that alien could enter without any thing the girl warned me about? Once again all the possibilities in the world gathered in my head. I knew if there is a chance to survive, this is it. If I let it slip, I will regret it my whole life, if I live though. I came to most practicable decision, that the gate detects the presence of alien and turn off it self. (I haven’t heard anything like opening gate before the alien entered), so I thought giving it a try.

I breathed deeply, as if collecting all the courage I can. The alien was still examining the fainted person, and his back was towards me. I couldn’t have asked for any better opportunity. “Now or never.. Now or never..” I kept repeating this to myself and sprinted towards him. I was aiming towards his back neck and praying it to work.
But just a moments before my strike, it turned back and gazed towards me. The shiver of fear conquered every part of my body, but it was too late, I had already executed the punch I planned, but it was its neck which got targeted. He, unexpectedly, threw back some steps behind before collapsing. This even surprised myself. Either I was stronger, or he was weaker. I doubted the latter.
Anyhow, I triumphed my first alien encounter. My courage defeated my fear and never left my side till the very last moment. I proudly looked over others but they were more shocked than surprised. I proud feeling melted away.

I ignored them and searched for something. I found a gun like gadget and kept it for myself. Without even asking for help, I dragged the alien body towards gate and let him pass halfway. Everyone was still staring on my actions.
“What are you..” The same girl voiced again but I already passed though the gate and my proud feelings returned.
“Hurry up everyone, don’t you want to live longer than this ?” I shouted. Some got up, while rest still summing up what happened.
“Hey you.” I targeted the girl. “Find the exit and make sure everyone get out of here. I will distract them.” I handed her the gun and smiled weakly. I waited for no confirmation and rushed towards the left passageway. Soon I spotted some more aliens and executed some stealth attack like before. “They have weak physiques” It filled my moral bar to full. Suddenly I spotted one large room and some aliens were looking at a large screen full of figures. I wasted no time understanding it and threw myself on them. Kicking and punching everything I could. Suddenly more aliens entered the room, with unfamiliar weapons. I knew its the time to escape, but I took out a moment to stare at the so-looking-like control panel, I understood nothing, but I I turned a knob to only thing I could recognize, from Earth to Sun. The ship started vibrating abruptly making some aliens loose control and fell towards one another. It was my one in the lifetime chance to escape and I dashed towards the exist, simultaneously keeping my own balance stable. Some aliens were following me and I was taking the routes first-come-first-serve basis. Out of the blue I got a glimpse of the girl, she was searching for something, or someone. Pouring my remaining power towards my feet, I ran in her direction. She spotted me just at a perfect moment.
“WHERE”S THE EXIT ?” I yelled at my full power, she pointed me a direction and herself too ran towards the same. The ship was vibrating more than usual and I knew any time now, it will do some crazy things. Heaven won and I spotted the exit door, I clamped her hand, making her run faster with me and just a split second before the ship zoomed in the space, we jumped.
When I came to my senses, I felt like my energy is drained away and a heavy stone is tossed at my chest, (later I found out it was the girl actually).

“Are you Okay ?” I asked with my out-of-breath voice. She nodded and stood up, and helped me too. Everything was calm now, just like a storm passed away, but leaving no trails behind.
“Is everybody got down safely ?” I voice was stable. My energy returned to normal level too. She just nodded. She was unable to speak, or not getting what to speak, is what I guessed.
“Well bye then. My house is that way.” I pointed towards my own house.
“Mine is just round the corner.” She pointed in opposite direction. We looked at each other for a second, smiled and departed towards our own way. I couldn’t dare to look back. She risked her own life and came after just for me. If it was not her, I would have… As usual, all the possible reasons in the world gathered in my mind once again.

My Mom and Dad were in front of our house with neighbors. Mom noticed me and almost ran towards me.
“Where were you. Do you know there was an UFO spotted in our area.” She was panicked for sure.
“Oh really !!” I faked a surprised, “Where ? Lets go inside and check it on the news. I love UFO mysteries”.