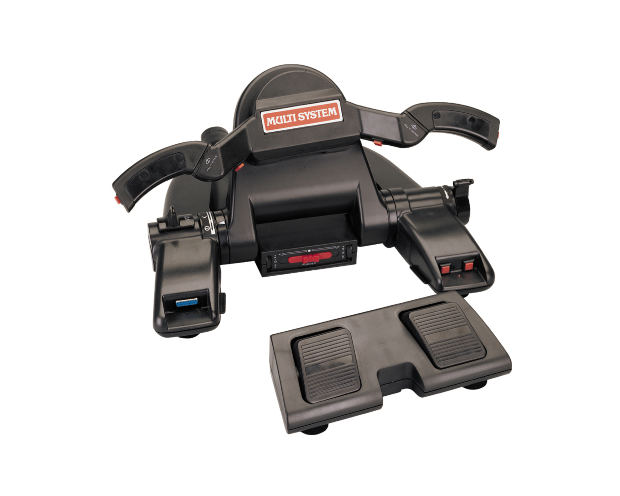 Huge machine gun sound and bomb sound were heard from Electronic City (E-City), the blood city. The city has very narrow long road with intersection (four way cross road) here and there .The city is always full of noise, yes only the gun’s and bomb’s sound, not the people sound. It’s not a place to live or rest, its place to fight, a place to run , its full of chaos and confusion .

During the starting era, this city  was a green and planned city with proper roads and route maps clearly mentioned at every end of the road, one can easily identify the route from one place to another place, speed breakers are provided at regular intervals to avoid accidents. Most of the tall building were green in colour to maintain the ambiance of the city and some small buildings were brown and black in colour decorated with some beautiful lightings. And we can find here and there small buildings; and some buildings were fully covered with thick wires for protection, and there is a blue building called connector building, where different people from different region gather here for meetings and make a connection point for their activities.

The beauty of the city mainly depends on the two long white bridges located at the starting point of the city and in between the small brown colour buildings. In the middle of the city there is a huge space ,square shaped tunnel, where people used to dance since its open place, we can get cool air from this place, so most often this place is occupied .

Everything was fine smooth, running and going fine until those BLASTER CODE RED – GANG OF BAD entered the city, every time they enter they make the city scream like anything and often make the city completely dead. When the city is under their control, u can hear only noises.

They will not allow a smoother life in the city, there attack is kind of guerilla attack, suddenly they will come, attack & kill the people and make the entire city dark, a complete shut down.

Now the situation it’s the final where KASPERSKY gang planned to kill the entire BLASTER CODE RED gang, they laid some brilliant strategy to finish them off, the last day of the fight, whoever wins rules this city? It’s a war between a good & evil – people in the entire city are praying that they all should run a smooth life & KASPERSKY gang should win.

Final Day – JUDGEMENT DAY – Around 9:30 PM, “Watcher” the one man army of the KASPERSKY team planned & started the mission, he was fully loaded with weapons and he has some master powers that he can’t be killed by normal machine guns, only through powerful missile launchers Watcher can be destroyed. Watcher strategic plan is to kill most of the BLATSER CODE RED gang members and bring their attention to the center of the city, so that all the corner of the city can be safeguarded by KASPERSKY Gang.

BLASTERS CODE RED also made a plan and placed few strong guys in the top of the tall Green building in the E-City with powerful missile launchers. Watcher started shooting at the people with Red colour shirt in front of them, because BLASTER CODE RED – Colour code is RED. He killed most of the people and the KASPERSKY guys from the tall green buildings launched the missiles, but Watcher escaped from every shot. Suddenly around 5 helicopters surround the tall green building and they kill the entire KASPERSKY guy who has the missile launchers.

Finally all the corners of the city was safeguarded by KASPERSKY Gang and few guys of BLASTER CODE RED was cornered and they were surrounded at the centre of the city, near to the square shaped tunnel, only the major commanders and main powerful person of BLASTER CODE REG gang – CONFICKER, SLAMMER, NIMDA, SASSER & STORM were alive, rest all of them were dead.

Now KASPERSKY Gang surrounds those guys and was ready to trigger the fire. The moment they are about to press the trigger, all of a sudden everybody stood still, no movements from anybody the entire place was frozen.

“Daddy, Tinku has pressed the button and the CD came out”,

the service man came out from a room very urgently and shouted,

” SIRRRRRR what sir?  Please take care of your kids, I have been working from morning till 9:45 PM for servicing your computer only, whenever it starts and works for 5 mins and then it shutdowns again. I was breaking my head for the whole day and finally identified lot of malicious virus and now I m running the KASPERSKY ANTIVIRUS software to rectify, in between your small kid pressed the button and the software stopped running now.

I m annoyed now; I don’t know whether it will work perfectly or not. Let me insert the CD and check again, if not please take the computer to another service center..

Now he inserted the CD, after few moments….

KASPERSKY GANG is active and they pressed the trigger and killed all the – CONFICKER ,  SLAMMER,  NIMDA , SASSER & STORM of BLASTER CODE RED Gang,

And the E-City became very peaceful and life of the people started to run very smoother.

Now the Service centre guy saw the message “NO VIRUS FOUND!!!!” and he took the CD out from the player and he closed the cabin box over the MOTHER BOARD(E-CITY) and tightens the screw.

“Sir, your system is ready, please make ensure you install the anti-virus software and make sure they are updated properly & periodically and have threat free Computer.”