You are here: Home / Science Fiction / The Missing Plane 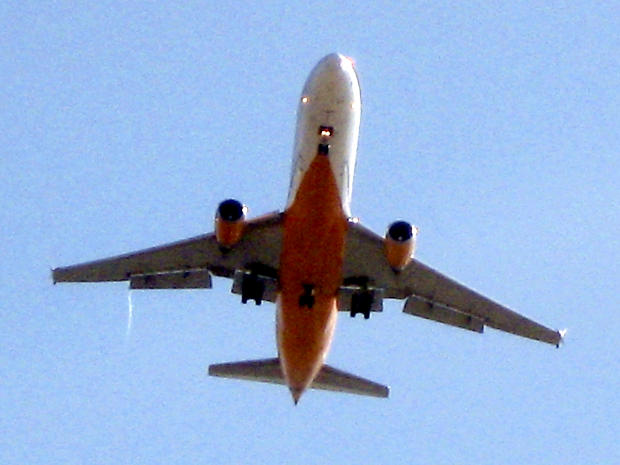 All the sand here is white. It feels wonderfully fresh and moist beneath my withered brown feet as I walk upon the barren land. I have made it a habit to make a complete tour of the region each day at dawn. It is nice to have something to do.

Like each day, without fail, my first observation is my plane upon which I and my crew embarked on the mission to locate the missing plane MH370 of Malaysia, over the southern Indian Ocean. The voyage reflected hopelessness in itself because it had been well over a year since the plane had gone missing.

As we approached the area where the MH370’s radar signals had last emanated from, we encountered strange cloud phenomenon-a tunnel shaped vortex loomed up menacingly straight ahead of us. Like excess water gushing into a gutter, our plane flew directly into it, scraping its wings on the way. All of the electromagnetic instruments malfunctioned, and the magnetic compass spun inexplicably. Nobody had any idea as to what was going on. As the tunnel’s end caught our eye shot, we expected to see clear blue skies; instead a terra incognita greeted our eyesight. The sky was morose gray, and a small white strip of land outshining the dark green water around it, lay underneath us.

Without resting, I tread ahead with my feet sinking in the sand of unknown origin. My plane’s derelicts stretch up to 2.75 kilometers, so I’ve measured. The last component to be spotted is the landing gear of the plane, which deserted us the earliest.

I ordered the pilots to land, because we were running low on fuel. The journey through the mystical tunnel had taken about five hours. Gazing from above, the land seemed solid, but we were caught unawares when our plane approaching at 120 knots descended into the sand. A major upheaval followed, that altered the entire body of the plane.

After a research of twenty one days, I am assured now that I am the sole survivor of the wreckage. On my first day here, I discovered some blood on the sands, devoid of corpses. Maybe they had sunk within the earth or some other planet perhaps. Yet every day I hope to see a companion, dead or alive, whom I could lament with or grieve for.

Strutting ahead, I approach the “Stellar zone”, as I call it. The divergent light rays from distant stars strike only at this location, molding up the sky around it as a black carpet with multicolored glitter sprinkled over it. It is my favorite spot.

Everything has changed since my arrival on this No Man’s Land. The surroundings are bare and rugged, offering no succor to the weak-hearted; however, it isn’t easy to give up. The mind clings on to hope desperately, afraid to let go. This made me thrive in this locale.

Every day, I compose letters or notes like this one and flow it beyond the horizon. The green water here doesn’t have wetting property. It had occurred to me to sail upon the ocean myself in a similar manner, but the hurricanes lined up along the horizon bound me to the territory. After some perception, I know now that the visible mass of clouds and dust in the distance is actually a Wormhole, and there are infinitely many of them enveloping the skyline. I don’t know which of them lead to earth. I am also pretty sure that my plane was unfortunate enough to fly in the sector exactly opposite to the infamous Bermuda Triangle on the globe. It has been suggested that from time to time, a rift in space-time opens up at Bermuda Triangle and follows to the core of the earth, to the area diametrically opposite to it. Maybe we entered the passage and reached a new dimension or space.

With the uncountable notes I unleash into the ocean every day, I do have the possibility of at least one of them making it to earth, on to someone’s hand. Maybe one would believe it or not, but I know it to be true. If God created zillions of natural items, some of them are bound to be supernatural.

I don’t have an unlimited food supply. Before that paucity bedevils me, I wish to erect a pyramidal structure that could serve as a tomb for all the lives lost ghastly here, the souls forever reposing in peace, but the bodies never found. When I die, I know I’ll be dissolved within the sand, but I know I should leave my mark. Maybe, someday it might be acknowledged.

Moving on, I near the end of the island that I am marooned upon; as well as the prize we had put the effort for.

Each day, I gaze intently at the shore, for there is the missing plane MH370 right before my eyes, in its eerie tranquility, destitute of humans, but saturated with vehement emotions characteristic of humans like helplessness, grief and insanity that might’ve greeted the passengers when they would’ve first trudged upon this appalling land.  Godspeed.