You are here: Home / Science Fiction / THE NIGHTMARE ! 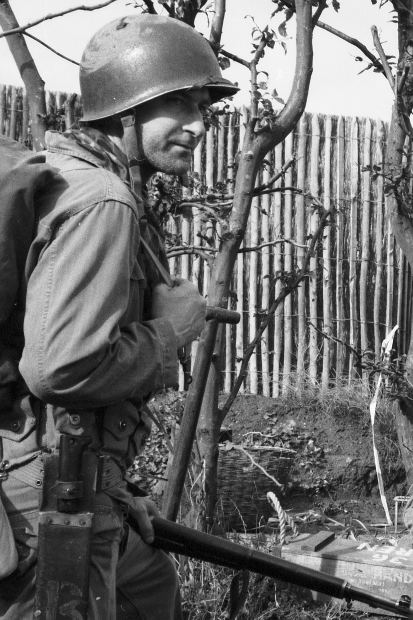 Short Story – THE NIGHTMARE !
(Note: Image does not illustrate or has any resemblance with characters depicted in the story)
Photo credit: keeshu from morguefile.com

It was a  restless day full of apprehension and fear of something unknown which had clasped me .

Busy schedules and overloaded responsibilities too sometimes fail to drive such insane thoughts away . They have their way of hovering over the mind even on the extremely busiest day! Walking down the lane that reaches straight to my house, I had glanced everything around. It was all the same, the shops with something new to be displayed, cafeterias with people gossiping, the souvenir stalls wooing the new tourists and the skyline getting brighter with the illuminated sparks of night lights.

With the keys in my hand ,which I usually take out once I disembark from the company bus round the corner ,were tinkling as the chimes of the keys moved in my hands. I reached my destination  and stepped on the stairs to insert the key . Shockingly it didn’t turn around and I pressed it a bit to see whether it was put inside properly.

The little pressure opened the door ajar without even unlocking.

all the gates to agony

darkness is what I can see

In the tunnels of time

where I reach suddenly…”

I was stunned and astonished. Had someone burgled into my house when I was away?  Was there anyone  already inside waiting to attack me? Numerous questions confused me and I rushed inside to make sure  if things were  in proper place.

Before I switched on the lights,I saw a luminous bright light coming from the room adjacent .

I slipped  slowly into the room.

Suddenly I noticed a huge mirror leaning against the wall. It was a precious antique piece,one which can be  a prized possession.I could not remember why and how this had landed here. I had never bought this piece nor I did own it.

I  went ahead to have  a look.

“The mirror on the wall

looks at me ,mocks  and laughs

“what made you return

a better place to live in?”

“The city has turned into a dead corpse”, I heard few voices screaming.

Gunshots and noise of  artillery deafened my ears. Military troops moving adjacent and having a fierce combat.

“Nicholas”, someone shouted , ” shoot! what are you waiting for?”

I turned around to see another soldier trying to say something. The bombshells again hypnotized my senses.

Suddenly I could feel the weight of the Lee-Enfield rifle hanging around my shoulder .Thick fluid wetted  the grip of my hands, I could see blood all over.

I had in me the mix  blood for my mother had been the once beautiful girl of the Serb! I had the looks of her distinct charm and the raw dominance of my dad.

“Shoot ,you fool,else you will be killed “, I could hear the lines again.

It was my commander ordering me to face the enemy .I remembered each scene from this deadliest wars of history ,the World War 1.

Millions were killed, innocents slayed, cities destroyed and towns vandalized. For 2 long years I was moving continuously with my troops killing thousands of soldiers,”Humans I must say.”

“This should end” , I had screamed to myself.I cannot shed more blood ,the view of the brutal faces,the terrorized looks haunted my dreams.

“See how you are lost

succumbed to your pressures

apprehensive has become your future

I see the gloomy dust of pain

on my face in the image”.

How did I reach here ? It was 1915 ,which meant I had travelled back in the time space into the past. But why? I never knew I was a soldier ,a rather such a cruel  one. This bloodshed is a part of my life which had scared me till today.

But I am a software professional and just 30 yrs old then is it my previous birth that I am visualizing? Is it a dream? This could reconnect me with the fact that I usually woke up in the middle of the night screaming in dream of an outrage of war and pleading, “Please forgive me ,my Lord.I cannot kill innocent people.”

clear off the doubts”

I heard my voice ,

“go back to the world profound

shall tangle and drive you insane

go away run and flee

Profusely sweating I wiped my face and found myself standing back again in the corridor of my house.The scene had vanished and I was stupefied like a statue. The split second or the  few minutes during which I visited  the  real situation,  had been a nightmare for me all during these years and for the first time it had awakened my being.

I knew it was past and I could walk ahead now without fearing about the traumatic dream which killed me every second.

from the new door!”

I returned from my memories,it was a dream or travel in the time space like in fiction stories I don’t know ,but it ended my worst nightmare.