You are here: Home / Science Fiction / THE ALIENS 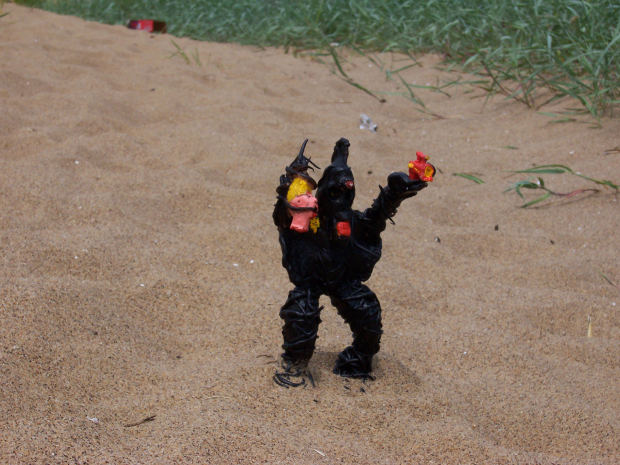 The wind blew hard and I found it difficult to brush away the little strands of hair which fell on my face. I had hardly reached the mid of my book when I heard some noise beside me. I looked up from my book to search for the source. To my dismay I saw two little things on the ground beside me. Before I could see properly as to what could these little creatures be (that is what I felt like naming them because they resembled some bugs which we are found in the garden but a little bigger than them) to my surprise they seemed to walk on two legs like human.

As I carefully kept watching the creatures they walked to the little stream flowing besides to where I sat. They had some leaves in their hand. The bugs placed the leaves in the stream and jumped on to them. The leaves started to flow down along with the flow of the water. I looked down the stream and I saw the bugs move into the distance till I could see them no more. I wondered what they could be  and how they had picked the leaves and used them as boats for travelling.

Soon I had forgotten about them and was immersed in the book. I had hardly turned a couple of pages when I felt some weird sound disturbing me. It sounded like a motor. I looked up. I could see the bugs fast returning through the stream but this time without the help of any leaves. They were emitting red and green lights from a cap shaped structure on their heads and there were antennas that resembled one on a radio. The sounds were coming from these bugs. They were fast heading back to where they had started. Till then I had imagined them to be some bugs but from that moment I started to wonder if they were aliens from some other planet. I had watched these kinds of things in movies. A fear began to grip me. What if they were aliens and if they attacked me? How strong are they? I realized that the stream trip had been in charging themselves and now they looked much bigger and stronger than before. I quickly hid behind the tree and waited.

The aliens (I think that would be the right term for them from now) got out of the stream. They dug a little hole on the bank of the stream. The mud there was a little damp as it had been raining the past few weeks. Once the hole was ready the aliens ejected a yellow colored liquid from their body. It was a little shiny but greasy. This continued for about ten minutes. Was it alien blood/ waste? Whatever it was it stopped after 10 minutes. They closed the hole with some wet mud.

The aliens then brought the antennas on their body close together. And suddenly what seemed like a small alien till then looked like a UFO vehicle. The small thing had increased in volume to something big and before I could even have a proper glimpse the vehicles flew past trees and clouds into the space beyond. I kept thinking about the hole and what the aliens had ejected into that hole. Was it a mark before an invasion of the earth? Was it some kind of marking to return to the same spot?  I decided that I would not let that happen………. Never ever. I ran to the hole and slowly moved the mud from the hole. As the mud moved away I saw some small little yellow creatures or rather eggs. Baby aliens that too on earth? I opened my handbag in which I carried all those essentials needed for a “silent lonely picnic”. I emptied the water bottle. And one by one put the alien babies into the bottle closed the lid promising myself to research on the same back home. I hurried through the little woods back to my home as the dusk had set in.

I carried the bag into my room refusing to have dinner with family. Now I was in my “lab”. I called my room “my lab” where I conducted small experiments. I took the bottle out of my bag. But I could no longer find any alien babies in them. What was left was a white colored rock piece. How did the aliens escape? Did they possess magical powers? I decided to see what the rock piece was. It was something not very hard. I tried to smell it. I thought I should taste the rock piece. It tasted like salt. Hey it was salt….. I shouted out

Suddenly I  heard some giggles around me. Who could it be?

I opened my eyes to see my twin sisters Eva and Ana standing on my bedside with a piece of rock salt hooked to a thread. I was their victim. Slowly I realized that the “Alien Rock Salt” was nothing but my extended Sunday morning dream.