You are here: Home / Science Fiction / Freedom Fighter of Tomorrow: The journal 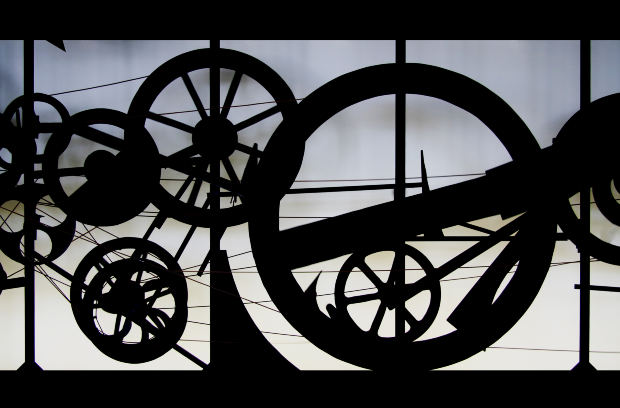 We have won the last battle and our resistance squad took cover in this cave with stolen supplies of food and clothes. We’ve been lucky to find this grotto. Otherwise we would obviously be captured by the government forces.

Now I’m sitting by the fire, satisfied as my stomach has been filled at last. I’m just reminding the events, that brought me here. One of the first memories are my grandparents from mother’s side. In fact, I had no opportunity to get to know my father’s parents, since grandmother died when I was three, and grandfather soon after, as the mourning and stress led him to a heart attack. The latter grandparents gave me the Bible one day. I could not describe neither myself as a believer nor my grandparents. It was rather a kind of tradition, that they wanted to share with me. They died soon, but often I was visiting their Facebook profile, which helped me to keep the memory about them. Also I got something to know about father’s parents from their FB profile.

My parents. They truly loved me. Even though I was sometimes spanked, which was in fact against the law, I understand, it was for my own good. Especially I remember one situation. At the age of seven I stole a bubble gum and some other sweets from the supermarket and was caught in the act by a security guy. Since I didn’t want to say my name, he called the police.

“Well, I’m lucky he didn’t inform my parents”, I sighed with a relief.

Of course parents were called by the cops and took me from the police station.

“Oh no! Daddy will kill me, once we return home.”, I was thinking.

After going back home, I was ordered to go to my room. Soon the father came in.

“Now I’ll get, what I’ve deserved for.”, I thought with a feeling of resignation.

But he just looked at me sadly, nodded his head and left. Man! I prefer to be beaten to the pulp rather than look in his eyes at that moment. He said nothing, but his eyes were saying “You disappointed me, son! Brought shame to the name of the family!” That was horrible, brought me down, but simultaneously I knew, I would never do this again.

Well, this never ended quickly after I had joined the resistance. What would daddy tell me now, when stealing is my way to survive? Surely he would understand, that now the circumstances are very different, but theft is always a crime. But what should I do then, dad? My choice is between breaking into warehouses with food, the modern granaries, what sometimes results in killing some guards, and on the other hand, giving my freedom away. I cannot go to a normal work, cannot earn money and then spend them in a store. Not until the government implants me a chip onto my hand. Yes! All our generation is implanted with chips. The few who are not, like me are outlaws. Most of my friends had their hands chipped, when they were teenagers. And today even the new born children get chips implanted on their little heads. Does no one see, it is exactly like the Book of Revelation says:”It also forced all people, great and small, rich and poor, free and slave, to receive a mark on their right hands or on their foreheads, so that they could not buy or sell unless they had the mark”?

I attended to school only for four years, when a new reform replaced classical education with e-learning. That was, I think the first step to the total control of the global society. Isolated from each other, students, still children were shaped exactly according to the teaching program of the government. There was no flow of ideas among the peers, no cords information interchange.

After graduating from school, I went to work. Evidently our leaders found me inappropriate for university education. My job was looking after a machine hall in a food factory. Machines were packing minced meat into tins and my only tasks were pressing the reset button, when the production line was jammed, and call a maintenance worker if it didn’t help. Besides, these visits of the worker were the only occasions for me to a human. The whole process was automated, so I was the only one in the hall.

Several months later I learned, that my father was arrested. I wonder which one of six hundred sixty six members of our government made the decision, or maybe it was some lower-level clerk. It was not easy to get information about the father, but I found out, he was accused for contacting the resistance. He denied during the trial, but records from Google maps service in his mobile proved, that he was staying in the resistance camp (now former camp). Why did he take the phone with him? Moreover some of resistance commanders had used to be among his Facebook friends three years before. Even though he removed them from FB friends, that fact was still in the database of the community portal. That was far too much for me! The great shock, I experienced, brought me to escape from the factory, abandon that sick society and join the resistance myself.

Recently, something like a month ago, another squad of our resistance gained some success. Somehow they obtained drones – flying robots as small as insects, flies or bees, they pretend to be. They were invented in the second decade of the twenty first century. Our freedom fighters found them very useful in recon missions. It’s a pity, our resistance has only few of these small drones. Again, they confirm the words of the Bible: “Then from the smoke came locusts on the earth, and they were given power like the power of scorpions of the earth. They were told not to harm the grass of the earth or any green plant or any tree, but only those people who do not have the seal of God on their foreheads. “

Our struggles against the Apocalyptic Beast continue. It is hard, since we suffer lack of everything. Everything… but freedom! But how long can we stand? Let the Armageddon come and set the world free!

PS. I hope you enjoyed my work. It’s just a sci-fi story, and is not intended to be prophetic anyway, however did you wonder, if the Beast was not spying you, while you were reading it on the internet? :)