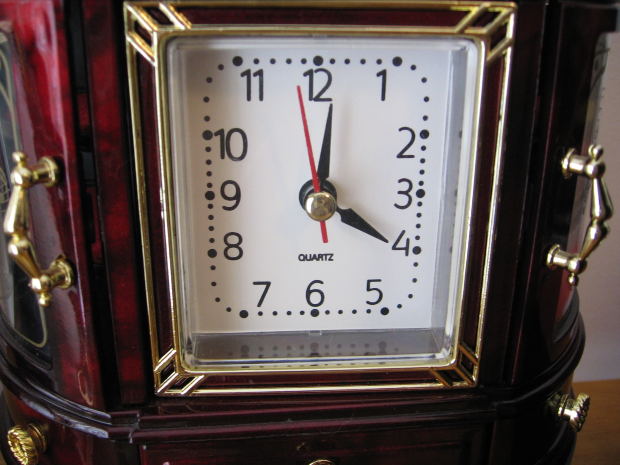 Ramchand was looking earnestly at the large grandfather clock which was their family heirloom. It showed 10:08, in the morning. As he looked at it, sipping on his goblet of aerated lemon juice, his mind began to wonder to extra-terrestial facts and astrological beliefs.

He looked at his own wrist-watch to make sure that it was showing the correct time as all the members of his family(Ramchand included) believed that the grandfather clock was infallible as far as time was concerned. The time was correct all right. But something else struck him as he looked at his wrist-watch. Inside the glass covering the word Quartz was encrypted. He knew that it was the name of the company of the watch-maker but he made a very strange relation:”Quartz…Quasars…Quartz…Quasars.”

He started thinking that to reach one quasar one had to live for at least ten billion years, when a spaceship might take him to that unimaginably bright heavenly object.

“But light won’t take that long,”Ramchand wondered,”It might take only one-millionth of that time.”

However  as Ramchand stared at the arms of the grandfather clock, another thought came to him,”Time will bend along that Einsteinian concentric circle, and one could get trapped inside it.”

Ramchand felt sleepy. He decided to succumb to it and put the goblet of his refreshing drink on the table……………..

He looked at the grandfather clock again. It showed 10:10.

“Only two minutes of sleep!”

He wondered, though he felt rejuvenated. He then looked to his right. The lemon drink inside the goblet was half-full. He decided to finish to it and drank it till the last drop and put the goblet back down on the table. He looked up at the grandfather clock again. He started violently.

He pinched himself, yes he was awake, “Then the clock!”.

Even as he looked at the clock the hands made dramatic changes and positioned themselves at nine and six respectively.

“Hi, Ramchand, could you plase help me with this problem?” It was his sister coming towards him with a notebook in her hands.

“Later. Shiami, what is the time?” Ramchand said.

“11:15” said his sister and went away without further ado, annoyed at being refused.

Ramchand looked at his watch again. It showed 9:00 now. His cell-phone rang. It was his boss.

“RAMCHAND,”boomed his boss over the phone, threateningly,”You told me you had already sent the Kobe consignment details via E-mail to my account. It was 9:30 then. But I don’t see any new addition to my inbox. First you take a casual leave for the day and now you are lying.”

Ramchand became spell-bound,”All my actions have been undone!!” he thought.

He disconnected the call and ran out of the house like a mad bull, stopping now and then to ask a passer-by the time. He became more and more distressed and finally returned home and slumped onto the sofa.

The phone rang. It was his boss again. Without waiting to hear the accusations, he said,”Just give me an hour, Sir, please,” and switched off the phone. He then put his head in his hands and bowed down.

“You were wrong to say that to your boss, son” came a soft drawling voice from outside the window.

Ramchand looked out to see who it was and saw an old wise-looking person standing.

“May I come in?” he said gently. Ramchand went round and opened the door. The man came inside, surveyed the house with a smile on his face, nodded at Shiami who was passing and then looked at Ramchand before speaking. All this while Ramchand just stared at him.

“I followed you when I saw your behaviour on the road, ” the man said,”Let me guess…your clock has gone all funny or rather I would put it this way: you are seeing time all messed up while others are not affected.”

“Then how would you realize whether an hour has passed or not, like you said to your boss,” the man said with a twinle in his eyes.

“So what’s happened to me?I-I-was asleep and then when I wake up I find that time is.. time is..”Ramchand , being a practical person found it hard to say aloud but nevertheless,”time is going backwards.”

“Simple, you are trapped,” said the old man.

“Don’t ask me. I am not God. Though I guess that it might have happened while you were sleeping.”

“Are you-” started Ramchand.

Ramchand racked his brain. He had million questions to ask and a billion answers to know.

“My time is going backwards. It is 5:30 in the evening of the previous day. Can this mean that I will get younger by the day?”

“No I don’t think so. Only you are trapped and not others. If you go on getting younger then you will age below your sister and then you will one day pop into your mother’s womb. It’s not possible.”

“Then time should stop for me rather than go backwards,” Ramchand replied.

“Time is not something that stops. It is infinite as you very well know.”

The old man gestured as if to ask whether he could sit down. Ramchand nodded indifferently. The man made himself comfortable before continuing.

“Everything in the universe has an opposing force. Even matter has anti-matter. Similarly infinte objects  also have an opposite. That is called Infintesimal Small Infinte is not unending. It is just the thing which is greater and more than dynamic than what we can imgine as the largest. Infinitesimal Small ironically is the thing which is lesser than inferior to what we can imagine the smallest. You are trapped in time that is apparently moving backwards but it might be that you are experiencing the opposite.”

“Isn’t there any way to get out of this trap?” said Ramchand

“And what about my actions which are being undone?”

“The actions which concern you only and which no one else has seen you perform will be undone while those which you have done in the vicinity of other people will preserved in their mind that Ramchand has done this job because it is not possible for someone to suddenly forget that someone has done something when it was done in front of them. I have just deduced this eventuality. I know not for myself. I am as confounded as you are. Only difference is that I have got used to it. It is very difficult for someone trapped in time to lead a normal life.  It’s better to get away from it. I have an instinct which tells me if someone is trapped like me, that’s how I identified you.”

“When did this happen to you?”

The old man turned to him and said,”What was the date when it happened to you?”

“Today-“Ramchand said looking at his watch which was now in a merry-go round,” I mean, by my perspective tomorrow-” the old man cocked an eye at him,”well the date was 13th May 2007.”

The man brought out  a battered and cracked watchfrom his pocket and said smiling, “Good, my watch says the date is 14th July AD 256. Can’t say the time. It’s not still.”

Ramchand had a stupefied look on his face, seeing which the old man started laughing.

The two men sat quietly for a while. Ramchand as perplexed as before. Then the old amn rose and made to go but stopped and turned round. “You know there’s this 89 year woman in our village who used to be the mid-wife at births. She witnessed my birth.”

The old man’s was back. “Thought I should tell you that she is the last remaining person who witnessed my birth. All others have died and with them the memories that I was ever born. She is very old now. Would die any day. You should keep your mother healthy.”

The man went away. Suddenly it struck to Ramchand what he meant as he departed.  He rushed out again but the man was nowhere to be seen.

As he went back he could not help but curse the man for notifying him that his life was numbered till memories lasted.