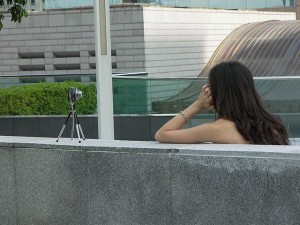 “So you are trying to say that I can actually..?” I asked.

“Yes, of course. You see Lina, I already told you how this works.” Dr. Matthews seemed convinced upon his theory.

“But, how will I be able to look into the past?”

“All you need to do is to concentrate. That’s the key.”

“You see, thoughts are a very powerful tool. Every thought has a weight. But that weight depends on how strong your thought is. So if you think hard, hard enough for anyone to think you are in frenzy, then maybe you can go back in time.”

“But there has to be something else too?”

“Yes, there is. There has to be absolute silence around you, nothing to disturb your concentration at all. Other than that, I think it is pretty simple.” The doctor was smiling.

I wondered what was there to smile about. I had my doubts, this was sheer madness!! It was just not possible, breaking all the rules of physics, how can you look into the past?

“Doctor, I still think this is not right. I know you want to help me out. But this is a mistake. “

“I already explained it to you.”

“Listen, a photograph ingenuously does something that not even most complex mechanisms fail to do. It captures time. Something that flows, something that cannot be brought back, but a photograph, it captivates time. Thus it acts as a gateway to go back to that time, and revive our memories.”

I was getting confused with every word being said. How is it possible to literally enter a photograph and go back in time?

The doctor continued, “The time that has been captured in the picture is fixed. But that time in our present frame of reference is an event in the past. You may say that this gives rise two parallel time dimensions, one that is going on right now, that is, the present. The other is the stationary one in the picture. And our thoughts, they give you the power to translate between these two dimensions.”

I didn’t know what to say. This seemed like an inconceivable thing to happen. But Dr. Matthews seems so confident. I got up to leave. After hearing all these intricate assertions, all I wanted was some rest.

“And one more thing” Dr. Matthews stopped me.

I was standing on the terrace at my home. It was the right time, around five pm. The sky looked so bright, the breeze so cool, for one split second, I forgot why I was here. This terrace was the same place where my father was murdered a week ago. The police said that it was a suicide, but I never believed them. My father was not one of those who could commit suicide. He was a man of headstrong principles and values. He had faced so much in life that nothing in this world could cause fear in his eyes. The whole business empire, and raising me especially after my mother died, it could not have been done by a man with a fallible heart.

Dr. Matthews was my father’s close friend. He came to visit me after his death. When I said that I doubted if it was a suicide, Dr. Matthews asked me to come in his office. And what he told me yesterday was way beyond anything to be believed. But then, what could go more wrong? I could give it a shot, though deep inside, I knew that all this would result into nothing.

The next day, I had the photograph developed. I was eager to conduct the experiment as soon as possible. So I went straight to my room, switched on a very dim bulb, and looked at the photograph. It was just me sitting on the terrace. I stared at it for a very long time. My mind was still filled with doubts.

“What a foolish idea this is!!” I thought.

I didn’t know what to do except looking at the picture. It was just me, I didn’t see my father, or anyone else. I started thinking why I am doing this, about my theory that he was murdered. I kept staring and thinking about his death. My eyes became watery, my head throbbed, dizziness was taking me over. I kept thinking about my father, the moments I had shared with him, the life he gave me, the time when I got the news, the first time I saw his dead body, the moment when I was numb with pain.

Tears rolled up in my eyes, I thought I was going to pass out. Suddenly I felt that I was being lifted upwards, my body seemed weightless though I could see my feet on the floor. I started hearing screams in my head, and all I could see was my father, his smile, his dead body, the terrace, the murderer.

And then there was darkness.

I wished I could die. The suffocation was becoming too much to handle. I wasn’t able to breathe, the blinking lights in my head were making me insane. I wished I could make it stop. But I couldn’t, if only I could know what was happening.

The door in front of me creaked. Wait, there was a door? Where the hell am I? I started to get up to see what was happening, but then I realized, I was floating, not in air but in water. I started to swim, but I was losing my stamina under the sun. The door ahead was still open, maybe my answers were hidden behind that door. I kept swimming under the bright sky. The cool breeze flowed, the evening was all set at the pinnacle of its beauty. I was getting tired from the excursion. After what seemed like an infinite time, I reached the door. My clothes were drenched with sweat and water (or was it all sweat?).  The door was wide open. I went inside to find myself on the terrace of my home. This was strange. I went ahead to see that there was someone standing at some distance. It was my dad!!

I couldn’t believe what I was seeing. My dad, he looked so alive. I couldn’t control my emotions. I started running towards my dad. But suddenly a stupendous force hit me. I was thrown backwards. Somehow I got up and started running again. But at the same point as before, something hit me. This time, my nose started bleeding. I didn’t care and got up again. My dad was very far away, he was pacing on the terrace, definitely tensed over something. I was giddy from all the sweat and the blood. I started again to reach my father, if only for once, I can feel him, it seemed a long time ago had I felt his touch. As I reached that place, I was again thrashed by the invisible force, but this time it was so large that the floor cracked. I was almost knocked out. My eyes were filled with stars, everything was zooming in and out of focus. In this frenzy I could still see my dad talking to someone. Wait, who was that? They were having an argument, my dad was definitely very angry. The other person took my dad by the arm and brought him closer to the ledge. I wanted to save my dad but suddenly I felt the floor beneath me cracking away. I was going to fall down any minute. If only I could see the murderer’s face before I fall down.

Suddenly that stranger pushed my dad over the ledge, and my dad, he was falling, falling like a dummy, screaming all the way down. The floor finally gave away, and now it was my turn to go. But I kept looking at the stranger who killed my father. The murderer also looked back at me and for one split second, I thought the world had ended, the gravity did its work, I was falling, falling freely with nothing to hold me, moving away from that unknown person. But at the last moment, I saw the face, the grotesque visage winking at me. There could be no confusion at all. It seemed I was looking into a mirror kept far away. The other me standing on the terrace turned away, leaving me to fall down to the infinity, as I remembered everything what happened a week ago.

“I have something to tell you.”

“Oh please, I told you so many times. Your father committed suicide.” He castigated.

“I have a confession to make. It was not a suicide, I killed my father, pushed him over the ledge. Please arrest me officer.”