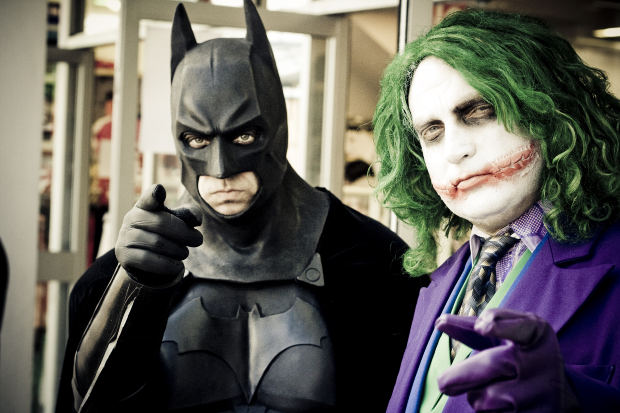 This story belongs to spin-off kind of genre and characters are inspired from Christopher nolan’s Dark knight triology and other batman comics, the timeline of the story is set to be after Dark knight rises. And the story is narrated by Robin.

It’s been an year since that nuclear explosion which took him away. I stepped into his shoes as he wanted me to be. People know me as Robin now.

At first I thought there is nothing much left for me to do as Falcone’s crime family extinguished, Bane and Talia from the league of shadows died, the mob was in jail. But there is no end for greed and madness in this world and it comes back taking some or the other name like False face society of Black mask or Deathstroke from league of shadows or some mad assassin like Deadshot.

But the things are different now, as he gave us hope. Administration believes in a vigilante now and are ready to work with us. Its great to be a symbol of hope but adjusting to these gadgets is a pain. I am not as good as him, but I am getting used to this.
BEEP BEEP
Gordon: Robin can you hear?
yes tell me commisioner.
Gordon: we need you at the arkham asylum.
ya I’m on it.

At the arkham asylum
Night-wing! what is he doing here.
Gordon: I called him. This is the worst case, joker and some patients have caused an outbreak and are trying to escape. We can’t let that madman escape, last time he was out he created a chaos which took a lot of sacrifice to be subdued. That should not happen again.
Night-wing: Don’t worry commissioner we won’t let that happen.
There is fire spreading near the east block, they must be somewhere around there.
Joker: woooooo I expected him to come. You both think you can match him mmm, I think he will come back if I kill you both. EH haaahahhhaaaaa.
Come on lets take them down from both the sides. Night wing cover me. Kick!! Bang!! Punch!!
Joker: you guys are strong, hmm lets see if you can handle the guy behind this door.
Night-wing: who the hell is he?
Solomon grundy he is psycho who believes he is a zombie.
Grundy: ahhhhhh, bang!! Bang** bang#!?s
Cough cough this guy is too much for us , that joker is running we have to stop him.
Nightwing: go after him I will take care of this guy. I have my sten-gun for situations like this, you just stop that joker.
Where did he go I saw him entering this room. Bang.
Joker: what is the need of all those gadgets when you fall for a wrench. Let me see if I can use any of these. Ummm what does this pellet do?
Tick tick tick
Joker:is it just smoke?
Huh huh no it will explode in ten seconds.
I should get out of here, there is the window. bang
Tick Tick Tick. Blast!!!!!!!!!!!!!!!
Night wing : hey you sleepy head wake-up now.
What happened? Where is joker?
Night wing: woh woh relax , you passed out. Did you jump of the 2nd floor ?
I said what happened to that joker?
Gordon: he’s dead. We got some remains of his body near the explosion. Prof.Hugo says the DNA of the body matches with joker’s samples. But I still don’t understand from where did the explosive come from.
It was mine, he somehow took it from me in the middle of our fight. So,he died off his own madness.

***********
Its just been one day after that and people and government are praising me, but I did nothing, I was outlasted by his madness even though I had all these gadgets and suit I could do nothing. Anyways I just got lucky , I think  i can sleep well tonight.
The same night at Colemen reese’s home:
Colemen reese : who’s that?
Joker: I think you did not forget meee hm. Umm that time you got lucky.
Reese: you yuyouu you were supposed to be dead.
Joker: Ohhhhhhhh you believed in that. Do you know why did I do it. My brother was a bully, and he used to beat the crap out of me, I hated it and when I complained to mama he would beat me even more. So one day I took a blade and did this to myself (scars) and started crying. My mama started to beat the crap out of my brother, everyone around was busy scolding my brother and I was smiiiiling. The same way people are busy praising that kid and now here I am.
Reese: don’t kill me please don’t .
Joker: shhh shhh shhh you will die but before you’ll tell me who is the Batman so that I can finish you of easily ehehehhaaaaa.

Next day afternoon at the batcave:
I never slept this long.
“Cling”
Who’s that ? Alfred is that you?
Bruce: do you always sleep here?
Wayne??? you are alive??????
Alfred: Yes, Mr.Blake he did not die, he just retired from his job then.
You knew that already, then why didn’t you tell me.
Alfred: because Master wayne wanted it to be that way.
Then what brings you here now?
Bruce: what do you expect from me at a time like this, when the joker is freely moving around.
But he’s dead.
Bruce: He tricked you, he will not die for such a simple explosive, that asylum is full of mystery and even before he used many patients from there.
Then what about that dead body and the DNA thing.
Bruce: he may have hid a corpse before you entered the room. Look I am not underestimating your work but the things at Arkham are a bit suspicious, Dr.Cavendish the Head of Asylum was on leave that day, most of the staff that day were new, even Dr.Hugo wanted resign but somehow he sticked to his job. Don’t you think something is suspicious over here.
Then let’s find him, he should have some friends or someplace to hide.
Bruce: We cannot find him, we can only catch him.
Alfred: Look at this Master Wayne ,I think this will help you.
News reporter: joker has blasted the batman statue near the hallway and has threatened that if Batman doesn’t come back he is going to kill Mayor.
Lets go.
Bruce: wait, we can’t be that straight forward. Let us both wear the Batsuit, I’ll go protect the mayor, you observe closely and finish him.
Sound’s good I am taking the tumbler. I’ll tell Gordon to take mayor to a safe place.

Evening at police headquarters near bat signal with Commisioner Gordon and Mayor
Batman: Robin ,do you see any movement any where ?
Nothing till three blocks from here and I told night wing to look out for other areas.
Batman: Alfred anything from CCTV’s around the city.
Joker : oh that old man I just put him to sleep, did you miss me??
Batman: what did you do to him?
Joker : oh I did not kill him uhmm no I didn’t, but it will be fun to kill him before you or should I kill the orphans in your Manor Mr.Wayne. How could you underestimate me, you thought I would happily live in that asylum for ever.
Batman: I am coming, don’t lay a finger on any, its between us.
Joker : it was, because I only knew Batman before but as I know your little secret now let’s play a game,in an hour My friends Dr.Hugo Strange will kill your armorer and Dr.Cavendish will kill Mayor’s son. Like all old times you got to choose one and don’t use your bloody sidekicks because I am watching you with your own software here. This is sooo muuuch funnn ehehehahhhhhhhhhhh.

As always your feedback is needed for improved stories and let me know if you like this one,by which I can decide to complete in another part or just stop it here.