You are here: Home / Social and Moral / Cow and it’s Moooo 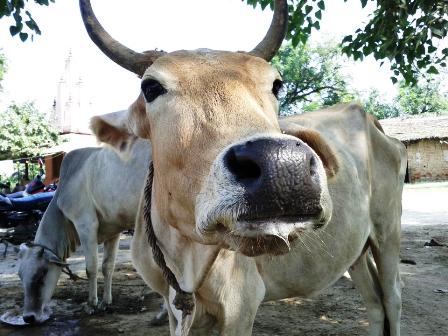 Article about Cow and it’s Moooo

Why do all Hindu boys worship their mothers?
Because their religion tells them to worship the cow.”

The Facebook status of a friend of mine read “Mooooo :) ( With a smiley) -feeling blessed”, which led to series of comments in the form of a conversation. Some congratulated her including me saying “Happy mooing”-COW, knowing very well the reason behind her ‘ Moo’ but some were astounded, that why a lady is mooing and feeling happy on being called a COW .

Well ladies do get flattered and feel elated if appreciated and compared to animals such as fish for their streamlined bodies, the way a cat walks; i mean the catwalk, if eyes are like a deer, voice as a cuckoo’s, nose like a parrot, attitude like a lioness / tigress, these metaphors do pleased them but what was this?? What on earth makes a lady happy on calling herself as a COW or mooing like one.

Cow is associated with motherly love, also called as Holy cow,pious but being called a full-fledged cow was definitely not sounding like a compliment, to many!!

So , soon those who were not acquainted with this terminology were enlightened by my dear friend. In Military lingo, unofficially the COW stands for Commanding Officer’s Wife.
My dear friend had recently joined this bandwagon or rather call it, the Cow’s breed.

Her husband had picked up the rank of a full Colonel and so she could not stop mooing now and ready to take on the grass on the greener pastures and go chomp-chomp, but it was more like a lioness/tigress leading the herd or group. It was time for her to celebrate moo-mooversly i mean marvelously and ring the bell and go moo-moo.

Moving to the real cows now: The real ones are struck or saved between the beef ban. They are not as lucky as the acronym (COW-Commanding Officer’s Wife) they stand for. I am not a vegetarian but yes beef is definitely not my cup of tea or rather would say not on my platter. I am an animal lover and especially an animal which serves us through out its life cannot be or should not be slaughtered, that is what i personally believe but every individual is free to make their own choices. My reasons are not religious or political, as cows have more or less have become Political animals- struck terribly between the political conspiracies created by humans and now the poor cows are on the receiving end.

I have seen my grandparents in the village milking the cows, worshipping them and treating them as their family members and how can we slaughter our family but moving to the city life, i have no choice but to have packet milk and witness the sad plight of the cows, the cows in the city are just left or would say abandoned once the purpose of owners is served. .They are seen crossing the roads and hit by the reckless drivers, slithering in pain and mooing helplessly, the green grass of the villages is replaced by the plastic and garbage. So many unlike me would support cow slaughter. But would like to question all those who support ban, that what have they done when cows in their locality roam helplessly grazing on plastic and poisonous left over.

Still remember my first essay in Junior school was on the ‘ Cow’ in English as well as Hindi. Where i described it as an animal on four legs , grazing grass, worshipped, gives us milk and is like our mother, but things have drastically changed now, where as an adult i see milk laced with detergents, the pure milk of cows and buffaloes replaced by the synthetic ones. The home made kheer, buttermilk and curd being replaced by the packet ones. There were times when even the shit and urine of the cows was not spared, in some parts of our country it is still being used as fuel in form of cow- dung cakes and even as mosquito repellent, disinfectants and urea.

With changing times, the cow once revered , is now struck in controversy of beef ban or no ban. There were times when girls were compared to cows for their docile and shy nature, the cow-boys meant men dressed up in long boots, wearing a hat and riding horses and cow-belt areas meant backward areas. But the poor animal now is on the verge of neglect and numbers fast declining.

Cows have truly served the human race in every aspect, from milk, to flesh , to manure to fuel, the list is endless. These creatures of God have also have socially complex ways, shed tears, feel the separation from their young ones. They have been burdened with moral stories and faced the pressure to live up to mythology, after all they have been in true sense a social animal like dogs and when we can adopt and keep dogs then why not cows!! why abandon them or sell them to the slaughter houses after all Cows has served us in every which way, so let us give them back their due and it’s time for us to serve them by opening more cow sheds and looking after them in their sunset years .