You are here: Home / Social and Moral / Not oiling but logical 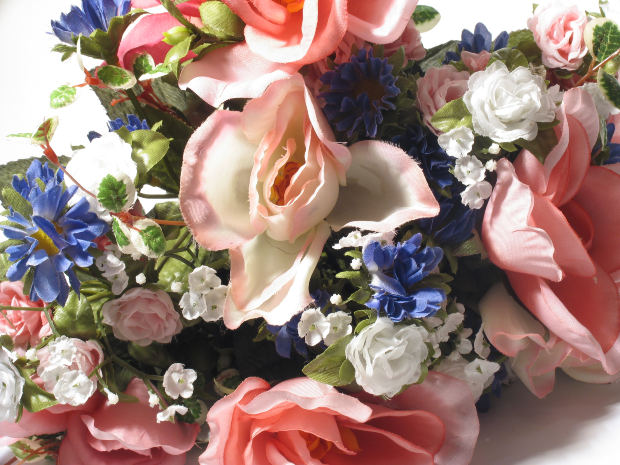 Swapnil while going to his office in the morning usually stands in a queue and get up in a bus from its depo. Naturally he gets a seat, if he is not too late. That is a govt bus and have special seats for Handicaps and Senior Citizens in it. Swapnil generally avoids those if he has other options of sitting in some different seats, as during the journey anytime, the moment one handicap or a senior citizen boards the bus, he has has to leave the seat for him.

Also a couple of pairs of seats are chosen which are very near to the main door of the bus and are marked for them, so that they need not face any difficulties to get the seat immediately after boarding the bus, even if the bus is in running condition or the crowd is intense inside the bus.

So like this one morning when Swapnil was going to his office, he boarded on the bus and was going fine until, suddenly from one stop his boss got up in the same bus. On top of that his boss also came and stood near him. They both waved at each other and smiled and continued their journey. Swapnil was just about to immediately leave his seat for his boss, when suddenly he noticed that one old man as well came and stood in front of his seat. His boss was not that old and so ideally he should lend his seat to the old man instead. Swapnil also doesn’t like oiling.

So he was about to give his seat to the old man, when he suddenly realised that the old man already has a seat reserved for him. If he just goes and stands in front of that seat, the one who is sitting currently would automatically leave that seat for him. But if he tells that to that old man, that would not look good as well. Swapnil also wants to leave his seat to his boss as his boss though not that much old like the other old man, but still is of age 50+. Swapnil had his good habit of lending his seat to any person above 50 coming and standing near his seat, if he is seated while travelling in a bus.

So in this case also Swapnil couldnt also directly tell his boss to acquire his seat in front of the old man, as then also the old man might mind. Also if not oiling, a person whom we interact with, everyday, does indeed tightens the relationship more, than the relationship we have with howmuch old a person is, whom we dont meet also once in a month. The case would have been same here with Swapnil even if instead of the boss, one of his old colleague would have got up in the bus.
So Swapnil started thinking of a trick by which the old man himself would not mind and would compel Swapnil to lend his seat to his boss. These took place within a very short span, and as and when Swapnil found out one trick, he immediately implemented that.

He simply stamped on his bosses foot not too hard nor too soft, so that at that moment it hurts but does not keep an impact for long. Also this he did and pretended that he dint do that intentionally and that he never knew that also that he did it.
The boss also immediately Shouted, “Ouch!!!!”

Just after this, before his boss could ask him the reason for his unexpected stamping on his foot, Swapnil said, “O my God!!! I hope there might be a sudden cramp on his foot and he wont be able to stand anymore.”

The boss quite surprised again tried to tell the actual incident when again Swapnil suppressing his voice continued pointing at the old man and said, “Sir I was thinking to lend my seat to you only. But after this, would you mind, if I lend my seat to this person instead?”

In the meantime the boss also hopeless finding no opportunity to explain the original thing, finding noone to listen to him concentrated more on his temporary pain to give it a soothing affect and then looked at the old man.

The old man, not even dreamt of a seat, suddenly shocked by this question and finding an opportunity to prove himself kind enough said, “I would rather if you dont let him seat and lend me the seat instead,” telling helped Swapnil’s boss, holding his one arm, to grab the seat.