You are here: Home / Social and Moral / A PAIR OF BLACK SHOES AND EINSTEIN 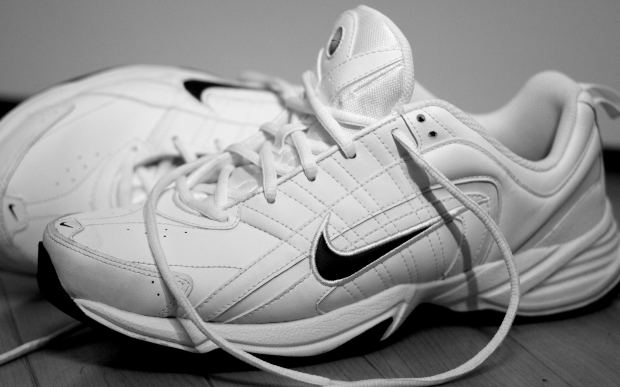 Story from College – A PAIR OF BLACK SHOES AND EINSTEIN
Photo credit: ManicMorFF from morguefile.com

Venue : Sitanath Brahma Choudhury Hostel, Cotton College – Guwahati. I am there in Room No. 2 with a few newcomer inmates. A few seniors are also sitting facing us. That was our first day in hostel. We were aware that a little ragging happens in hostels. We had been mentally prepared for that part as we left home.

‘Do you remember the names of your roommates? Have you learnt about their native places? – one senior asked looking at me.

‘What portfolio does your roommate hold for the hostel?’

‘Ok. And your wallmate ‘dada’ is the Block Monitor of the Hostel. And… can you say what is the Assamese term for Monitor?’

I pondered, literally scratched my head for quite some time, but failed to dig out the Assamese term for Monitor.

‘This very room had been occupied by doyens of Assamese literature like Dr. Maheswar Neog, do you know? You have just razed everything to ashes…’

I was embarrassed. My head dipped. As I looked down, the pair of shoes of my other newcomer roommate Arnab caught my attention. Blue stripes on a white background. I had no idea that a pair of shoes could be such a feast for eyes. My pair of black leather shoes has turned itself into an inexplicable colour with a thick coat of dirt and dust. My father bought it from the village square just a couple of days before I left for Guwahati. I have never ever seen a pair as attractive as that of Arnab’s. ‘Oh! If only I could put it on once!’ I just wondered. What my seniors spoke after that was just not recorded by my ears. All my concentration was confined on that pair of shoes.

I entered Arnab’s room after two days. The pair of shoes were lying there under the bed.

‘Don’t you wear it while going to attend classes?’ I tried to appear casual.

‘No, I’d wear only after Freshers is over. Now it would not be proper.’

‘Such a nice pair!’ – I touched the pair hesitantly.

As he was engrossed in something else, I utilized the opportunity to put my right foot inside the matching piece. What a soft, pleasing feeling! Such a nice weightless shoe, soft as cotton! Even the afflicted spots above the heel where my new pair of black leather shoes had cut through the skin did not detect any painful sensation.

‘Arnab, where did you get it? I mean, which store? Do you remember the price?’

‘Fancybazar… my elder brother bought it for me last year. I don’t exactly recollect the price, maybe something around twelve hundred.

‘Twelve hundred!’ A cold shiver went down my spine.

It was a regular practice for us to have our evening tea in ‘Maya Hotel’ located nearby. The oil-dipped fried paratha or egg-chop was our regular menu. During midday break, the five rupee paratha or ten-rupee chowmein had been the hunger-tamer. Purse allowing, sometimes ‘pulao’ of Mahamaya too featured in the menu. I made a quick calculation about the number of months it would take for me to spare the amount to afford a pair of shoes like Arnab by keeping aside some of the pocket money sent from home every month. A quarter pound bread of two rupee bought in the evening would carry me through for a couple of days. At midday break, the two rupee cream-roll vended by ‘bandhu’ in his push cart near the hostel would be fine – I calculated.

After about four months, I could accumulate enough to pay for the coveted pair of shoes in the shoe store at Fancybazar. Ranjan, accompanying me in the mission claimed a treat. My first visit on return was Arnab’s room. My prying eyes detected two different pairs and the special pair was missing.

‘Arnab, where is your blue stripe on white pair of shoes?’

‘O, that one? I just gave away to Ghanai. The other day, my sister staying at Delhi sent two pair of shoes as my birthday gift. What would I do with so many pairs? And, here too, Ghanai pesters me everyday for used clothes and shoes etc., so what to do?’

Dhanai is our hostel menial. Now his and my pair of shoes would be no different. My mind filled with sadness. I was more worried with the thought whether I would become a laughing stock for other boarders of the hostel when they’d discover I am wearing exactly the same pair of shoes as Dhanai. The next moment I found solace with the rationale that – it’s nothing, he and I are no different – both are, after all human beings. This is something not to be taken deeply; a pair of shoes is not everything in life. I returned to my room without showing him my prize possession.

Next morning as I got ready to go out to class, I put on the new pair and, with sheer excitement of wearing it drew attention of my two roommates.

‘Nice pair..but it is not worn with this type of formal wide bottomed pair of pant, little brother. These are called ‘sports shoe’. One should wear with jeans.

I was confused and devastated again. I don’t have a pair of jeans! They are absolutely right. I remembered seeing Arnab wearing that pair with jeans only.

‘One has to put on a matching pair with it..so, it would cost minimum five-six hundred.

I undid the laces, removed it and put it gently inside the box again. The thought of visiting Arnab’s room and asking him whether there was any chance of anyone presenting him with a new pair of jeans crossed my mind, but I resisted myself.

That very afternoon as I returned from class my roommate informed me about someone from my village making a call at hostel super’s phone asking for me, and also said that he would call again at night. I waited outside the office room right from evening. Ultimately the phone rang. It was Ratul from my village – my classmate.

After exchanging customary pleasantries he came to the point – ‘Pal, it is important. You would definitely come during Puja holidays? Just make it a day before. It is the marriage ceremony of Malini’s elder sister. Everyone from Malini’s family would be around, so if I don’t go properly dressed, she would be furious. Please lend me the pair of black leather shoes that you bought just before going for the wedding night, ok. I have managed a decent pair of trousers and shirt. I was just short of a new pair of shoes. Hello, are you listening?’

Returning to my room, I tried to remove the dirt and dust off the black pair of shoes. Now, it only needed a dab of shoe polish to make it shine like a brand new pair. How eagerly waiting Ratul is, to wear it in the marriage ceremony of Malini’s sister!