You are here: Home / Social and Moral / At the Airport 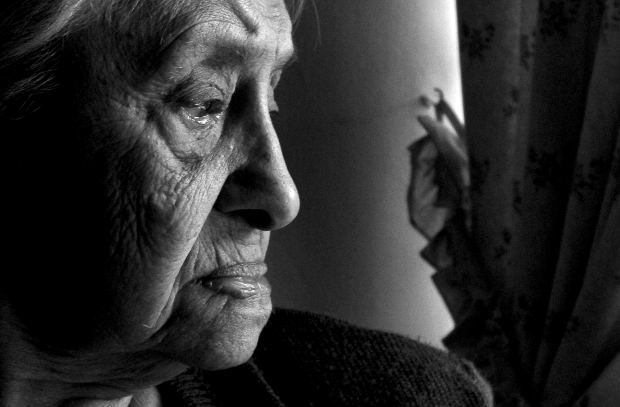 Moral Short Story – At the airport
Photo credit: chilombiano from morguefile.com
(Note: Image does not illustrate or has any resemblance with characters depicted in the story)

It was the fourth time Ritu had paced back and forth across the lounge. Her flight had been delayed and there she was, stuck at the humongous airport. She had been there for a couple of hours, and had done a fair bit of window shopping. The lady back at the counter informed her that the flight could be delayed further. Feeling jittery, she parked herself on a cosy couch at Starbucks. It was a busy Saturday evening and watching the crowd in the in-between land of cherished itineraries amused her.

Ritu sipped her coffee and aimlessly scanned the airport, amused at the emotions that that place held- the joys of arrival, the tears of departure and the excitement of a vacation. Amidst the crowd, an old man in a sloppy t-shirt was seen wandering around the public area. As she watched him, he went around talking to people, shopkeepers and even to group of airport authorities biding their time at Starbucks. He appeared to be in distress and was weirdly handing out dollar bills to people.

Ritu was quite a people-person and generally went out of the way to offer help.  She finished her coffee and headed out to the counter to ask about him. “This man has been in the airport for over a week and appears to be lost.” The staff replied with unmistakable lethargy in his voice. “He has not caused any disturbance to anyone, so the airport officials cannot take any action against him.”

It took a few seconds for the gravity of his words to sink in: There was no attempt made to help an old man lost in the airport for over a week. She did not linger there for long. Ritu went to him and tried to strike up a conversation. A few minutes of patient listening and she got to know he was a citizen of the United States and losing his memory due to old age. Apparently he had relocated to Philippines a decade ago to be with his newly wedded wife.

She offered to call his wife or family and inform them about his whereabouts, but woe betide he could not place their contact numbers very well.

Ritu knew that her attempts were to be drained in vain: Anyhow, she wanted to try talking to the officers about making a move to contact the US embassy, police station or trace their family. All she received was a shrug of indifference and their hands pushed away any requests put forth by her.

The airport suddenly seemed to hold back Ritu with a sense of purpose.

Ritu finally fished out her phone and dialled the US embassy. Her concerns were drained by the sheer coldness of the embassy that refused to offer any help to their citizen because he had left the country ten years ago.

Well, there she was, confused among the hustling crowd, pondering on how to help a grandpa trapped in the no-man’s land.

They sat down for a cup of tea. As he struggled with his fluctuating memory, he narrated his story of being an engineer in the US and about his second wife, who was probably waiting for him at their home in Philippines. He laughed, he cried and his tired eyes twinkled with joy in the warmth of a companion. Quite dreamily, he fumbled in his pockets and handed her a piece of paper. There it was- the parchment of hope, in legible writing, his address and his wife’s contact number.

All it took Ritu was thirty minutes of empathy, concern and a genuine heart to help someone; all that could have taken for any of those who were watching the helpless man, mocking at his misery and dismissing him with a scorn.

Amidst the sobs and heartfelt gratitude that rang through Ritu’s phone call to his wife, the lady told her how much she loved him and was looking all over the country for her beloved. She promised him that she would fly there soon. The lady sobbed harder and hung up the phone, blessing the young heart of Ritu.

Ritu held grandpa’s arms and found him a place in a hotel nearby. She took him out for dinner and gave his wife the address of the hotel. She made sure he was in safe hands and handed out a copy of his passport and ID to the hotel security and the airport counter, in case his wife had any difficulty in locating the place.

The US embassy, the airport authority of Kuala Lumpur, the café owners- Ritu held out her hand when everyone else folded their arms and watched as if he was no man’s business. A pinch of time, a phone call and a place to stay- the warmth of a 20 year old.

There is still hope for humanity.