You are here: Home / Social and Moral / Charred head 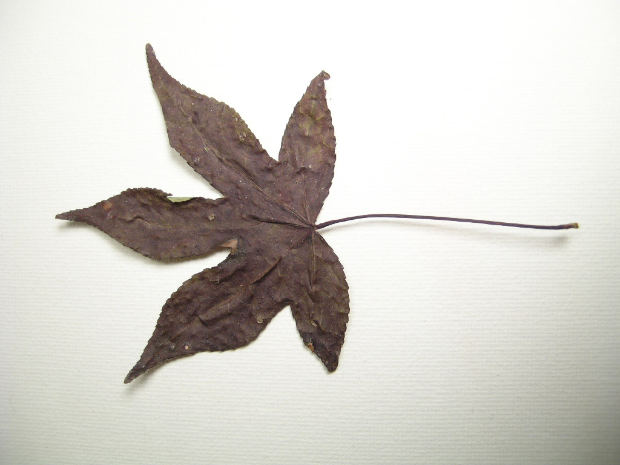 An unsuccessful writing career had prompted me to smoke. I would spend long hours on the porch smoking cigarettes. My wife’s infinite attempts to stop me did not work. At last in the late 1980 I left my home to end the banal nagging. I decided to try my luck in France.

Using all my savings I rented a small apartment in a town. I met many publishers but none seemed interested in my writing. My pocket was becoming lighter. Desperate, I went out every morning in search of a job. One day when I was returning from my job hunt, I passed by the local market. A few acquaintances were smoking and I joined them. I lit my cigarette and threw the matchstick away. An old woman approached us. She picked up the matches that we had dropped and disappeared into the crowd.

‘She is a mad woman’ one of them suggested.

There was something unusual about that old lady that interested me. I excused myself from the gathering and followed her.

I was led to a park. She gathered the matchsticks that were strewn across the place and collected them in a bag. It was then that I noticed how old she was. Her hair was milky white in color and was wispy. The skin cascaded down like a waterfall. The eyes were cloudy with cataract. She reminded me of my grandmother.

She was in tattered clothes. I pitied her state and approached her. ‘Madame, do you need something to eat?’

She stared at me for a while but did not reply. Picking up her bag, she left. I followed her but maintained a reasonable distance. I did not want to scare her. She walked silently. Many people walked past her but no one spoke to her. The old woman, whom I had now decided to call as Granny, looked ahead.

She stopped in front of a large mansion. Since my arrival in France I had only seen a handful of such ancient architectural marvels. Though the building was beautiful it was unattended. The plaster was ripping off from every possible direction and small portions of the roof had fallen. I was taken aback when Granny entered the mansion.

‘Who lives here?’ I asked a passer-by.

‘A mad woman lives there…’ he said without stopping.

I inched closer to the mansion. The name plate was old and the letters were hardly visible.

I peeped into her house through the open door. It was ungentlemanly but curiosity overpowered me. I wanted to know what she did with the matchsticks.

The house was sparsely furnished. Granny was seated on a structure that was once an empire sofa. The adjacent coffee table was full of matchsticks. She pulled out an eyeglass and began working on the matchsticks one by one. From where I stood, I could only see her trembling fingers running over the tiny matchsticks. I waited for an opportunity to have a closer view.

Hours later, she walked out of the mansion with her bag full. She returned to the same park and waited for the young assemblage to come out. She handed each of them a couple of matchsticks.

‘Wow…that’s beautiful’ a few exclaimed without turning back. Some did not even look at it and threw it away.
A gentleman was observing the sticks carefully and I joined him.

She had carved charred human heads on the burnt matchsticks. Some of them turned out to be near perfect human faces.

‘Look here Monsieur. She has written something here’ , the gentleman pointed.

There it was in a red jagged handwriting, a message on every stick. ‘Ne pas fumer’ I read.

‘Do not smoke’ the man suggested.

I turned around to look for her but she was gone. I went back to the same mansion. Now I was curious to know more about her. I turned up to a gathering of women next door.

‘Puis-je vous aider?’ One of them asked.

‘I don’t know good French’. I replied in a not-so fluent French.

I asked her about Granny.

‘She is Madame Marie. Her husband was an affluent businessman and she had a son. After her husband passed away, her son took up his father’s duties. He took to smoking and gambling. There were huge losses in business and Madame had to sell her belongings to pay back the loan. Later her son died and she lost her speech in shock’. She frowned.

‘He died of lung cancer. Horrible death. His mother was shattered. He was her only reason to live’.

‘Why does she distribute these matchsticks to people?’ I showed her the one that I had.

‘I don’t know Monsieur. People say she has gone mad due to her son’s death’.

I thanked them and departed.

I answered that question myself. It was her way to telling people not to smoke. Smoking chars our lives. She did not want others to die like her son. A matchstick burns burn away so instantly just like life and she made these carvings to convey her message.

‘But how many cared to understand her?’ I asked myself. They need to know that she is not mad. I had to convey her message to the World. No mother should lose her son this way.

Madame Marie was dressed up in silk. She smiled at the crowd. People clicked her picture with the book.

‘This is my Granny and this is her story’, I pointed at the novel which was in her hand. I had put a picture of her carved matchsticks on the cover. Hannah pressed my hand in delight. Granny’s story was widely received and I had had my first successful publishing.

Granny is now living with us in Britain. We are now a happy family. And yes, I have quit smoking.