You are here: Home / Social and Moral / A Delicate Kindness 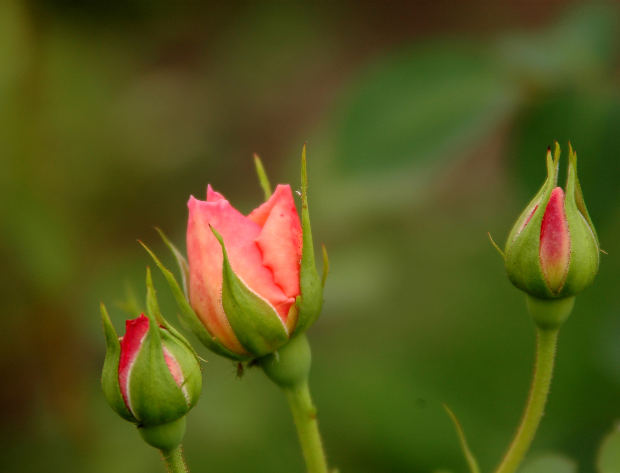 The young boy fell down suddenly on the hard pavement. That summer of 2005, was one of the hottest that ever rocked the whole of the country.

Dr. Kumar was driving back home from the hospital. He had just taken the left turn at Benito Juareg Marg when he saw the boy tumble down on the pavement, nearby to the bus-stop.  It was five o’ clock in the evening and the office goers had not yet left their offices. The roads were not clogged yet with the evening traffic that usually engulfed the city.

A small crowd suddenly gathered, surrounding the young boy. But no one dared to help the boy.

Dr. Kumar got out of his car in no time and made way through the small, insensitive crowd.

He lifted the young boy into a sitting position and asked one of the onlookers to get the water bottle from his car. With desperate briskness the Doctor splashed the cool water on the young boy’s face. After nearly six or seven such splashes the boy showed some kind of regaining consciousness.

The young boy Girish, opened his eyes and saw strange faces peeping into him. Worse still he saw himself sitting on the pavement and being attended to by a complete stranger. He rubbed his eyes several times and tried recollecting the events of the day.

He had reached his college- the Venkateswara College at nine 0’ clock in the morning and attended his classes. After that he had been to the college library to work on the dissertation for his research work on molecular biology. In the ensuing rush to finish pending work he had completely forgotten to eat or drink anything to counter the wrath of that hot, scathing summer morning.

Then after studying for long hours he suddenly remembered that he had to catch the evening train to Lucknow for meeting his ailing Grandmother who he loved the most in the entire metaphysical world.

In the crazy rush to get to the station he had somehow felt weak and nauseated. His mind had refused to function in that scorching heat and thus he had fallen unconscious on the pavement.

Dr.Kumar being a good Samaritan knew what to do in the given circumstances. He did not waste any time in attending to this young patient of his. Dr. Kumar bought a bottle of lemonade and a pack of biscuits in a jiffy, from a nearby shop and told Girish to have them right away.

Girish consumed the biscuits and lemonade ravenously. After experiencing such unexpected kind gesture from a complete stranger, he felt a lot of uncontrollable gratitude towards his benefactor.

Dr. Kumar asked the boy his name and other details. The boy told him the details and tried touching Dr. Kumar’s feet in a gesture of utmost respect and devotion.

Dr. Kumar simply hugged Girish tightly and with a lot of affection. He hailed a cab that was speeding away nearby the Benito Juareg Marg and directed the cab-driver to take Girish to the railway station safely and make sure that the boy reached there well before the arrival of the train at seven in the evening.

After waving a good bye to Girish, Dr.Kumar walked back to his car. He ignored the questions which a few bystanders were asking him.

He simply started his car and sped away.

Years ago, he had found a similar young boy lying dead on the pavement near India Gate. Nobody had cared to help that boy lying unconscious on the pavement. That boy had just needed a little kindness from someone.