You are here: Home / Social and Moral / Humanity still exists (An understanding from a real incident)

(An understanding from a real incident) 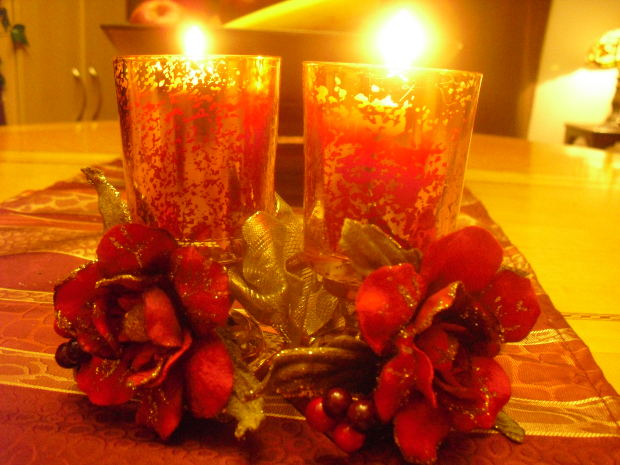 (Have you ever questioned the existence of Humanity? Here is a real incident that happened which proved that the Humanity is still alive. )

As it was a weekend trip to my hometown, my parents were much worried seeing me so dull that day.

I was trembled thinking about the incident happened on that day (1st June) just couple of hours ago.

“Mom, will he be alright?” , I whispered in her ears for the sixth or seventh time.

As usual, my lovely mother answered me in a soothing tone, “Yes dear, he will be fine. Don’t worry.”

Though my mom’s words were relaxing me from my emotional thoughts, my mind couldn’t stop thinking about him.

I was praying to all possible gods and goddesses to take care of that 12 year old boy.

An unseasonal rain during hot summer day was a bit surprise to all of us. That surprise of heavy rain continued for more than half an hour.

My mom and I was chit chatting with few other neighbors in a house, just two streets near by mine.

We got a call from my father; he asked us not to step out of the place till the rain stops. Yes, as it was raining heavily, none of could even dare to go out.

A sudden shout made us alert. We were terrified to see a 12-year old boy lying on the road, fighting with his life. He was rolled over on the floor with electric wires surrounding his neck.

As the streets were very narrow and drenched with rain water, there was hardly any scope to start the rescue operation.

A gentle man in his early forties stepped ahead to save the boy. Finally, he was able to remove only the electric wire with the help of a long bamboo stick.

As the floor was wet with rain water, it was not easy to lift the victim up. It was much risky to go near the victim as there was much possibility to get affected by the electric shock if one dares to save him.

“The boy could be a milkman”, a lady in the crowd confirmed showing the small tins of milk on the floor.

We dialed line man from Electricity board first and asked him to stop the main power immediately. Then we called up 108 for an ambulance and then to 100 to keep the police informed about the incident.

“The boy is no more”, someone from the crowd shouted.

I was crying out loud praying for the boy. I observed the boy breathing slowly and said the same to the people there.

It was the last hope to save the boy. By the time the main power was switched off, a 20-year old boy came forward, took the boy in his arms and ran to the hospital.

The young hero who was daring enough to save the unknown person disappeared from there in another couple of minutes. The victim was taken to a private hospital nearby.

I was still crying, thinking about the 12-year old boy (victim). What if nobody was there on the roads and none heard his fearful shout? My mind was not allowing me to even think that way.

The entire crowd prayed for the little 12-year old boy. Few people from the crowd offered the God, precious items on the account of saving the boy.

This is what all happened couple of hours ago. That was the reason for me to ask my mom. “Will he be alright?” .

I was sleepless till midnight thinking about the health condition of the boy (victim). As my body was restless due to the journey which I took the previous day to reach my hometown, I didn’t know when I fell asleep.

Next day morning, I was slowly opening my eyes and the only thought I had was to know about the boy’s condition. My sweetest mom came near my bed and said, “The boy who got electric shock yesterday has been taken to a private hospital and he is doing well now.”

“Oh, thank you so much mom” I hugged my mom tightly and thanked her for the good news.

“Dear, I know that you are worried about the boy. So, I personally went to his house and got to know about this.” My mom told and hugged me back.

Yes. Humanity still exists. Though nobody in the crowd knows the victim, they all prayed for him. They just wished him to be safe. A bunch of people dared to help him even though it was highly risky job to do. Neither the police came first nor were the ambulance. But the help and the rescue were all from the fellow human beings.