You are here: Home / Social and Moral / Use your skills at the right time 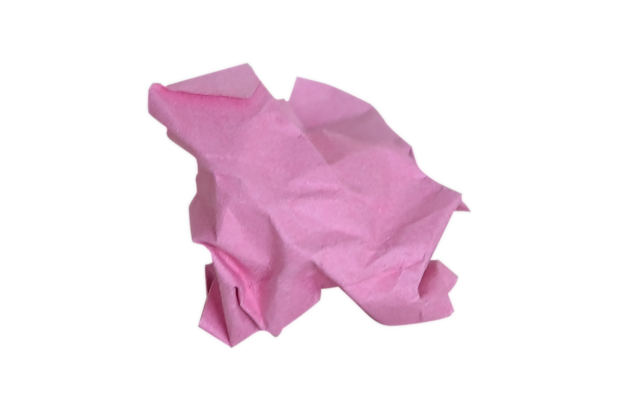 Moral Short Story – Use your skills at the right time

Once there was a magician named Nash was lived in Nanda village. His job was contacting street magic shows and make some earning with it. He was very good at his skill so audience where always entertained to watch his show.

One fine day he got an invitation from Kasthirbath community to show his magic in their festival. He accepted the invitation and decided to go to Kasthirbath, there is 2 day travel is necessary to go from Nanda village. He got lift from horse cart to Kasthirbath. He joined with the cart driver, cart driver accepted his request as he was a performer of the great Kasthirbath festival.

On the way he feel sleep and rested in the cart for a while, 2 days later he reached Kasthirbad and found the program place where the festival is going to take. Some of the volunteer invited Nash to the back of the stage for preparing before the show. Actually the magic show of Nash is just only a hour show as it is many performance need to take part. He prepared everything and came to the stage at the time of his show. He entertained the audience with his magic skills and tricks everyone was surprised with his ability. After the show community volunteer came to him and appreciate his work and give some earning for it.

Now the job of Nash is completely over now it is time to go back. He was not sure how to go back as he was come with the help of a horse cart. He was not at all interested to talk to the volunteers about it because he was not at all satisfied with the earning that he got. He thought that sometimes any cart may came as in his way but for his bad luck it didn’t. On his walk he goes to a wrong way which finally ended in a jungle. Nash was very afraid as he was alone and didn’t getting any idea in his mind to go on his correct place. He take rest under a tree for some while to get ride of his tired. Nash was waked up with a suprise as he was tied in a tree. He was out of idea what was happened, Nash began to loud his voice for help by hearing the voice a man came to Nash.

Nash requested him ” Please help me”

The man just looked and said something Nash doesn’t understand but he understand what is happened by seeing the dressing style of the man and the way of talking. Nash was captured by wild tribe as he was sleeping in the forest.

The tribe produced some sound ” Koo-Koo!” by hearing the sound some of the tribe members gathered and take the Nash from the tree and placed him in front of their leader. The leader talked in some language in which Nash don’t know but the preparation of the other tribe make him understand that they are going to treat him as a sacrifice to their God. Nash was frightened and was unaware to handle the situation. Some of the tribe members came to Nash untied him.

As he was untied he strucked an idea when he looked at the idol of the god. He take his small red towel from the pocket and shake it and show to them it become green he showed some other magic also. All the tribe members became amazed with the magic. They thought that the man is the enemy of their so that he has the divine powers and they where frighten if he do something to them so they leave him and began to run away. Nash stop a tribe and make him afraid with his magic and with body language he asked the way out of the forest. The afraid tribe member showed the way to get out of the forest. Nash was safe now but don’t know how to go to his home so he just walked some distance on the way he found a horse cart he asked for the life and got it. Nash came to his good safely.

Moral: Use your skill at the correct time when it requires.