You are here: Home / Social and Moral / Woman at a Wakeful Night 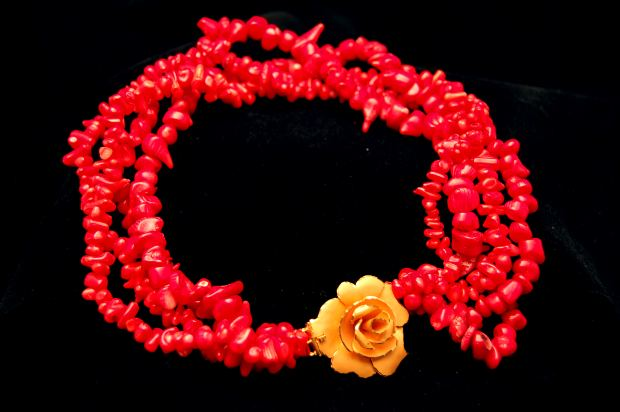 Every night before I slept, I spent time for skin care. In front of a dressing table, there I sat, cleaning my face, and at the same time I incidentally looked at the calendar on the table. I just realized that I “should” be celebrating my 17th wedding anniversary, but there was never a 12th anniversary, as my marriage lasted only eleven years. Thinking of this marriage in retrospect, I sighed, as my fingers skillfully dipped some nourishing cream and rubbing on my face in circles.

Recalling memories of the criticism by Neil, my ex-husband, I was always criticized by him of my appearance, especially wrinkles. “Look at you, how rough is your face! Your face is far incomparable with your sisters’.”

This had caused me attentive to my appearance in the future.

After I had finished my skin care, I looked at myself in the mirror.

“Oh yes, I am already forty. Due to the adequate care these years I look as if I were in my thirty something, and look far younger than I was six years ago when I divorced.” I thought satisfactorily.

The eleven-year marriage life came to an end when I was thirty four. Looking back at my marriage life, it could be simply described with two words – “disappointment” and “failure”. I was full of hope about “marriage” when I was young, thinking that two lovers would live happily ever after, but the truth was an exception to me.

After marriage, Neil and I moved to a house which was pretty good. Because of Neil’s extravagant spending, we quarreled frequently, and our relationship froze up. The reason to keep our marriage was the birth of our baby.

I always thought at the time, that “Only if we work hard and by saving money, we would have good life in the future.”

“Don’t go to work anymore. It is not good for the child to be placed in the nursery. You should look after him at home!” said Neil when our son was almost one year old.

“Does your income suffice for our living? And also the mortgage loan of the house?”

Neil did have a job with high pay. Nonetheless he always spent lavishly, and this was what I worried. Inasmuch as he lobbied incessantly, I promised him and stayed at home with our son. Insofar as my income was gone, the mortgage interest rate was exorbitantly high at that time, but Neil’s wasteful spending habit remained unchanged, we often had unhappy experience because of the daily household expenses problem. When it was his pay day, he wouldn’t give me money voluntarily unless at my beggarly request. He always replied

Or “I have to dine with clients and I’m out of pocket.”

At last, he gave me a pittance of earning. Even I carefully used the money thriftily and with the most parsimonious attempt to make use of it, it could only last for three to four days’ subsistence. Therefore, after a few days, I asked for money again.

“Your money given to me was used up. Give me more, Neil.”

“So soon? You do try to minimize your expenses! ”

He forked out only a paltry amount bit by bit.

He always complained to me “I have been objecting to the idea of buying a house. It was you who wanted to do so. You see, this has made me so hard.”

After some time, our house was sold due to financial difficulty. He didn’t get any benefit out of this transaction after paying off the bank loan and interest.

I deeply reckoned that Neil was a person who could share my wealth and good fortune but not to shoulder the poverty and hardship. While I was saving as much as I could hope to minimize expenses, he was still buying what he liked without care.

We rented a flat, within half a year, he could not afford to pay rent. As a matter of fact even though he could handle it, he was not willing to do so. When rent accrued for two months’, he only paid a month’s. At the end the owner drove us away. The vicious cycle of us repeatedly moving houses, owing rent and being driven away happened over and over again.

I didn’t imagine that, in such a time of hardship, he could still have money and mood to have an affair with other woman.

I couldn’t help but sighed, and my eyes shifted to my jewel box. I opened the box, a ring in a corner came into sight. I took up the ring and put it on my palm. It was my wedding ring. Due to non-stop dealing with household chores, my fingers had gone thick, and the ring didn’t fit me any more. At that time I hardly wanted to sell it, and now there was no point of bothering it. I put the ring back into its place.

“Is it a harbinger of our wedding to go awry?”

I turned my view to an exquisite necklace. I fidgeted with the necklace, but in my mind, there floated another necklace which belonged to someone else…

One day, I discovered, by chance, a small gift pack inside Neil’s overcoat pocket. I opened the box, inside there it was a platinum necklace, and also an oval pendant surrounded by a row of diamonds.

“Wow! It looks marvelous! He is really good to me. Several days later it will be our 11th wedding anniversary. I would better keep it secret.” I thought happily, but concurrently worried at the thought that he must buy it on credit while his credit card payment was still outstanding.

On that day, he said he was going to have a social gathering after work. He did not return home for dinner. There was no celebration, let alone the present. I always thought, “Is he going to give me a big surprise?”

After several days, I finally got the answer.

It was at noon of that day, Neil phoned me “I forgot to bring a document, which was left on the desk in the reading room. Send it to me before 3 pm.”

Presuming that I could have lunch with him on time, I picked up the document and rushed onto a bus to his office. But when I got off, it was already lunch time. Neil’s office was in front of me at the opposite side of the road. As I was waiting for the signal to cross the road, I was attracted by a sudden flash of light caused by the reflection of sunlight. I found that “necklace” worn by a young lady next to me.

She was in her late twenties with a yellow dress. Her eyes were at the direction towards a man when crossing the road. The man who just came out from a building was Neil. I stood still watching the couple leaving my sight.

“Yes, this necklace in hand was not the one Neil bought. It was bought by me with my several months’ savings when I returned to work after my divorce. I wanted to prove that I could live independently, and could afford a gift for myself.” I thought proudly.

I closed the box gently. Then, lying on the bed, I looked around that room. This was a small room in my parents’ small house. Though small, it gave me a sense of security.

I had been sleeping well for the past few years except that day. So I took out an MP3 player and listened with the earphones. I did not mean to listen to the music but to reminisce the past through the music. However, it was in vain. My thoughts swirled continuously…

After I discovered his infidelity that night, I questioned him. I thought he would admit his wrong. However the result was out of my expectation. He confessed blatantly and said,

“I have to tell you. We don’t match each other. We always quarrel over small matters. Perhaps we should part.”

“Is that what the woman wants you to do?” I said in discontent.

“Yes. I intended to deal with this matter for some time, and now our child is old enough to take care of himself. In addition Amelia wants me to deal with it as soon as possible.” He said without the slightest bit of remorse and guiltiness, his tone was somewhat just like a master ordering a dog “Go away. I don’t need you!”

I remember how broken was my heart that day, but I refused to cry, because he didn’t deserve my sadness over him.

The next day, I carried my luggage and returned to my parents’ house.

Recalling this heart-breaking event, I confessed that the decision for divorce was difficult. I had to return to work and be independent, but I realized that I couldn’t tolerate a man like Neil who was disloyal to me.

I put off my earphones, closed my eyes and placed the pillow on my side, lying steadily.

“Don’t think any more. Tomorrow is a new day, a day full of hope.” I whispered to myself.

Slowly and slowly, I went to sleep at last.