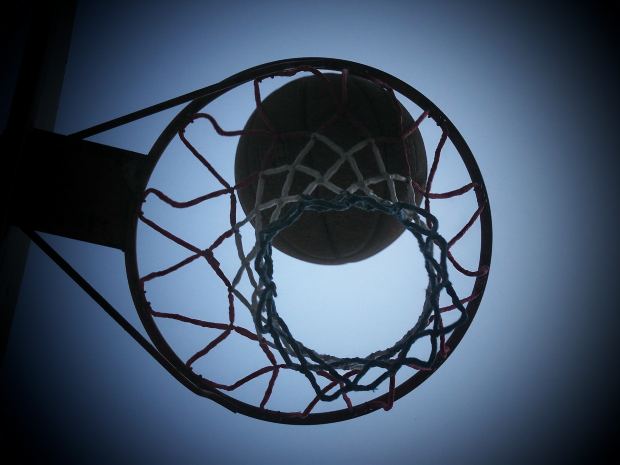 Moral Story of a Basketball Player – I am George
Photo credit: Annika from morguefile.com

It was 9.15 and the biting chillness of the cold wintry night made it quite impossible to stay outside even for a while. The blue Car eventually stopped in front of Rohan’s house. Joseph his crony moved forward and helped him to step out. He supported Rohan till the doorway but didn’t dare to ask him for any further help fearing he might break loose once again. He handed over some North Indian food which he bought on their way back from the Doctor’s chamber.

Prudent enough, I will rather speak to him on mobile sometime later, Joseph grumbled. He turned his car and zoomed of in the silence of the night.

Rohan groped for the key in his bag to unlock the door.

Just after barging into his luxurious room he banged the door back. He staggered and limped towards the Sofa. Somehow he managed to sit on it slightly leaning back to make himself comfortable. He felt rather worn out and helpless. Minutes rolled on. The excruciating pain in his left knee was getting worse and he tightened his jaw, looked around knowing not what to do. There were Pain Killers kept on the table in front of him.

With a blister in his hand, he took a pill out and popped it instantly. He started to feel bit cozy now.  Medicines showing it’s temporary effect on him.

The opinion of a second orthopedic surgeon could be better in taking the final decision pertaining to surgery and with this idea in mind they went to meet Dr.Rahane at Trinity Hospital.

The mobile kept buzzing on. It was his aunt on the other side.

What happened Dear? She asked impatiently in a shivering tone.

Nothing but a small accident. He didn’t want to drag the conversation and feigned as nothing serious happened.

Tell me anytime when you need my help. Your Aunt would……………, he disconnected the phone and went quiet for a while. He didn’t want to talk to anybody for the time being.

Had it not been for the ugly Trip, he muttered to himself, I would have been able to enjoy my game to the utmost as I always did, sneaking past the opponents dribbling and dunking the ball to perfection. His exemplary skills and expertise added to his fairness and outstanding sportsmanship earned him respect and honor and a lot more than what he expected.

Look who goes there, the kids would point at him and look in amazement. Young and old alike would simply take a delight in watching this young, handsome, sturdy bloke walking down the streets. Some would rush forward pining to have his autograph. Be it a Mall, Airport, Hotel, Railway Station and the like, People would love to catch a glimpse of this swashbuckling Shooting Guard.

He thought of his School days when he struggled so much to bag a position in the Basketball team. He would put in thatextra efforts to hone his skills dreaming for success. Although being bantered and mocked for his lean physical stature he never heeded so. Some of his neighbors would burst into laughter and sardonically add “Standing tall and useless”. The zero of tomorrow. Despite such stupendous humiliations, he didn’t give up hope and kept going with the firm determination to get through. He still remembers how his father was literally hard up but still took the pain to get him into the Basketball Coaching Camp. Brought up in a family of misery and hardship, it was his father who was one and all for him. His mother passed away when he was barely five years old. When there was none to provide solace to his bruised mind it was his father who would keep his hand on his shoulder and tell him smilingly that he would be a shining star one day. That was enough to bolster his spirit and lift his sagging morale.

And so was it.  The Spectators were simply stunned to see him perform. Come on Man, Its your day and you are going to do it. They would shout and cheer seeing him scoring points. Their unrestrained exuberance surpassing every limit. There were flashings in leading newspapers and media.

But might be destiny had something else for me, he uttered feebly. The intricacies of life are hardly predictable, he thought. He shrieked in terror pondering on the gruesome incident that happened  and which perhaps brought his jubilant Sports Career to a standstill.

How could they do this to me? They are none else than my pals. No No, may be I am wrong in my assumptions. He still found it hard to accept the truth which haunted his mind every now and then and he felt greatly perplexed.

How did it all happen, asked the attending Doctor in his meek voice when he was rushed to the Hospital  yesterday evening soon after the accident.

Rohan was simply dumbstruck and felt cumbersome as he had no precise answer to explain the cause of his pitiable state. His cadaverous appearance was literally shocking to the Doctor who recognized him in no time and started to take that extra care as expected for big shots.

His denim T Shirt was torn. There was blood oozing out from his forehead. Also there had been a deep scar in his left elbow. He was almost deadened of his senses being struck by massive pain.

Dr.Venugopal  the attending Doctor applied pain killer injection and started nursing his wounds. He prescribed pills for reducing pain and swelling which otherwise made difficult for him to move on at ease. Also he suggested for an immediate Scan to assess the extent of physical injury.

Young Man, you will have to take admission for proper medical treatment. But to the tough man it was just incredible. Unstirred by such pathetic state and given to his usual obstinacy, he thanked the Doctor but opposed his suggestions.

Jacob stepped forward to convince but had to stop when Rohan glared angrily at him. He knew his friend better than anyone else and so thought about taking him back home.

Rohan went to the hospital next day with Jacob. He was much eager to meet the renowned orthopedic surgeon with the report of his MRI Scan in the famous City Hospital.

Waiting for his turn he felt impatient. The threat of bidding adieu to the game loomed large in life now; he thought to himself and felt eventually perturbed.

Soon he was called forth. Supported by Joseph and taking hold of the Crutch he slowly headed towards the Doctor’s room. The attendant opened the door and both stepped in.

Dr.Shetty nodded Jacob to assist his friend in sitting on a Chair close to him.

He listened about the entire event as well as the course of treatment taken so far. With a sign of annoyance, he drew out the MRI report and studied it carefully.

He looked at Rohan and started to examine his knee with meticulous care.

After he was thoroughly done, he looked at both of them, silent for a while.

What happened Doctor? Will I be OK to get back to my game? He felt a bit jittery and asked the Doctor in a shaky tone.

Well young man, I don’t want to keep you in dark. Given the kind of injury you have with your Knee you need to undergo two successive operations. There has been a severe crack in the external patella. And in a medical case like this there is a 60 – 40 chance of revival. Also to be fair enough a lot depends on the patient’s mental stamina.

Rohan felt a shudder down his spine and went speechless for a while. Soon he felt the strong arm of his friend and came back to his senses.

The Doctor added, the first operation needs to be done at an earliest, better within 10 days.

He prescribed a list of medicines and told everything that needs to be taken care of until the operation is done.

Soon they left the Hospital and made it back to his home.

There were eight of them in an open-hooded jeep when they were returning from the Picnic on Friday. Most of them boozed out and dancing to the tune of music. For Rohan who was a health freak and already a celebrity was careful enough not to indulge in any such activity as might slur his reputation. He found Joseph a bit drunk although he was cautious enough to drive safe. An hour passed by, Rohan felt like standing for a while. He stood up catching hold of the iron rod as a support. Time kept on rolling while the car was steadily heading towards their hometown. All on a sudden Rohan felt a hard push from the rear end at which he lost his balance and within no time went off the car and fell down with a heavy thud. That was it.

Hatred,jealousy,vengeance what exactly it was that made a man to take such a dreadful step. One out of the five who already had the sinister idea of destroying him. Sometimes the brutality in a man is concealed behind his feigned identity, he thought to himself. He never had any enmity and trusted his friends with an open mind. Trust could be so deceptive at times, he smiled gently.

Walking by the Sea shore he watched the lovely sunset and stood silently while holding the two crutches to support him. Operations although successfully over but it was taking a bit of time than usual for recovery. Two months passed by and Rohan was walking without a support, hats off to his unyielding spirit. He recovered although but not to the extent of taking to the fields again.

Can you coach me Sir? Somebody asked from behind.

Did I hear that properly, Rohan asked to himself.

He turned back to see a kid of hardly eight years old smiling at him with glimpses of hope awaiting for a  positive nod.

I am George, a friend of yours and a great fan too, perhaps the greatest on Earth. I always enjoy watching you on TV.

Rohan was simply speechless and his mind was gripped by a sense of happiness. It gave him a new hope of a new beginning.

Do you think you can be a star one day? Rohan asked. The same question he faced a thousand times in his childhood.

Yes, I can, only if you are there with me to guide me all through.

And this was perhaps a new beginning for Rohan. Weeks passed by. He opened a Basket Ball Coaching Camp and within a short span it was crowded with children highly enthusiastic to lend their best.

Come on, it’s your day and you should do it. Rohan was shouting after the kids as they kept on moving ahead with the ball.

Rohan carried on with his Camp and alongside some modeling assignments that fetched him big bucks.

Now the kids to him were everything and he leaped forth with greater joy and confidence.

George turned 15, now the captain of his School team and already quite a name in this game winning the junior Inter School Basketball Championship. To him his hero is still the man he met seven years back.

Rohan felt greatly elated as he found him to be surrounded by the little Heroes most of the time. He started believing in the fact that there is always a new beginning that can be brighter enough to evade all the darkness in life.