You are here: Home / Social and Moral / Half Tusker Lord 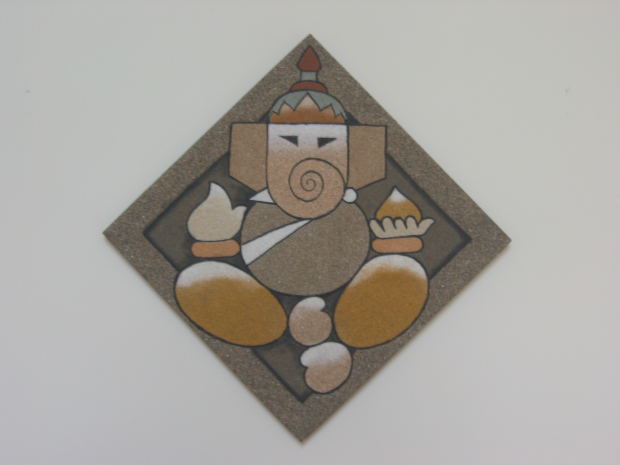 A cloud of darkness was hovering over me, but one day truth rained on me and perished hope turned green again.

In all misty memories of long lived life, there is one day I can never forget. It was a festival called Ganesh Utsav, one of the most ancient and anticipated festivals of Indian culture. It’s celebrated in the name of Half Tusker Lord; also known as Ganesha. Tuskers would soon ride down the village, as soon as first sunray embraces the earth.

In our time, only Tuskers really knew about Half Tusker Lord; for rest, he was a myth. These Tuskers are few chosen monks; who live in the forest, up on the mountain hill. Every year on this occasion, Tuskers wear an elephant mask to represent Lord Ganesha. They drive on their mouse boogies; which symbolize the Mighty Mouse, on which Half Tusker Lord used to ride. They approach every house to distribute happiness along with sweets called Modak. After praying Lord Ganesha, a sacred ritual procedure Yagna is carried out for betterment of whole universe. Every beggar and homeless guy is provided with good food and clothes. Scattered pieces of humanity reunite on this day.

Celebration had begun; I could hear a herd of Tuskers riding down the mountain. I felt chilling warmth around me. As a kid, I was afraid of Tuskers because of their kooky appearance; but not anymore. I saw a Tusker approaching my neighbourhood. He was wearing an elephant mask which made him look like half elephant; half man. Along with him, we prayed to Lord Ganesha for the betterment of humanity. We also prayed to Mother Nature, to forgive our sinful deeds damaging her. Lastly, we performed Yagna, a mass ritual procedure. The best part was when we got to eat Modaks. After everything was over, that Tusker (having seen me little puzzled) asked me if he could help me anyhow. Without even thinking, I asked him the question which was unspoken for years:

“Who is Half Tusker Lord?”

He didn’t react, instead he smiled. He then asked me if I could accompany him to the river. I agreed. On our way to river, he began to tell me this story, a story that changed my life. It was painfully comforting.

Many years ago, the Elephant God named Airavata was the King of forest. He was one of the mightiest and wisest creatures that ever lived on the Earth. He had three trunks and tusks as big as Mammoth’s.  His skin was milky white and eyes as red as blood. He had a gift to see beyond the time. One day he saw something horrible. He saw mankind invading his forest; burning heavenly place in which his tribe used to dwell. Being the King of forest, he was responsible for every living soul in forest. At that time, only thing he could do was alarm Mother Nature, urge her to save forest. Elephant God wanted Mother Nature to destroy mankind, but how could a mother kill her own children?

She told Airavata, “Every specimen on Earth will demise when their time comes, and even mankind is no exception to that. I’ve been kind to everyone. But whenever someone uses my resources excessively, I’ll show them my fury; I will not be merciful then. You’ve to put your trust in God of all Gods and leave the rest on your fate.”

But Airavata could not return without solution; he had to do something for sake of the forest, for all the wildlings that dwelled in it. Out of misery, a God who could die at his own wish ended his life. He died, so that forest could live his life. Mother Nature was grieved to see that. She said, “Even being Nature, I’ve no power to add your life span to forest. But as a mother, I can’t let your efforts go in vain. I’ll give you a hope; hope that someone will protect your dream, your tribe and your forest.”

What happened after that was truly a miracle; Mother Nature directly gave birth to a child. That child then became known as Ganesha. He was also referred as Half Tusker Lord, because he was half Tusker; half man. He was very gigantic, compared to an average human physique. His face resembled Airavata; he had a long trunk, sharp tusks and red eyes, same as Airavata. It was said that he had wisdom of Elephant Lord. As a child, Ganesha was wild, fierce because he lived in the forest with wildlings. It was very important for Ganesha to know the meaning of humanity, because more or less he was also a human. A devoted couple, Shiva and his wife Sati adopted Ganesha and brought him up. They used to remind Ganesha, “You’re not an ordinary child. One day, you’ll become God to humans. You’re the last hope of Elephant Lord; you’re the last hope of Mother Nature, your true mother.”

Ganesha pioneered to celebrate Ganesh Utsav. As soon as dawn cracks, he’d ride down on his mighty mouse to help humans, to provide them with life essential things. On that day, he would teach mankind to pray, not by uttering words; by thanking Mother Nature for what she has given to us. Ganesha instructed us to preserve forests, because they were maintaining natural balance; which was essential for sustainable existence of all livings. He would also distribute Modaks, which was believed to be made in heaven.

As time passed, Ganesha became messiah for mankind. Men adopted him as the God of absolute intellect and wisdom, the remover of obstacles. He’d listen to their sorrows and give them courage to live lives full of hardships. But even God had little evil in him. Half Tusker lord wasn’t only blessed, he was cursed too. It was said that, in the dark the red eyes of Half Tusker Lord would glow; and person to look directly into them would die. That was one the reasons why Ganesha never showed up at night.

Everything was going well, until one day. On that day, Saptarishi Jamadagni, the chief of village died. His body was found in the forest, where Half Tusker Lord lived. Everybody suspected that dark turned their God into evil. Jamadgami’s death grieved every villager, they were furious with Ganesha. Parashurama, the son of Jamadgami was burning with wrath; seeking vengeance became sole purpose of his life. Lord Ganesha didn’t show up for quite a while, that made situation worse.

Parashurama decided to end that by killing Ganesha, he went to the forest. He was holding axe in his hand. The deeper he went into forest, the angrier he became. He saw Ganesha sitting serenely, his eyes closed as if he was lost in trance. Ganesha didn’t react, but he was aware of Parshurama’s presence then.

He said, “I knew you would come soon, I’ve been waiting for you.”

Parshurama’s anger was at peak. Without a second thought, he hit Ganesha with axe. The blow was such a fatal, it could’ve killed Ganesha. Ganesha’s tusk broke! Still he was calm. He told Parshurama that what he did was expected from him. Parshurama’s anger began to melt, he felt like Half Tusker Lord already knew what was about to happen. Like a small crying child, he then asked Ganesha why he killed his father.

Ganesha explained, “It was a midnight when your father was wandering in the forest, collecting woods. I was sitting with my eyes closed, praying to God of all Gods. Suddenly I felt a gentle breeze passing by me with cold wind; that broke my concentration. Something forced me to open my eyes against my will. The next thing I remember is; I saw your father standing at some distance. Unfortunately, he looked into my eyes. There is not a moment goes by, when I don’t regret about my actions. Some things are inevitable.” Parashurama was feeling a strong sense of guilt. At that moment he realized that even Gods are not perfect. His father’s death was a mere accident.

Then Half Tusker Lord spoke in his godly voice, “There is nothing I can give you to compensate what you’ve lost. Your father has passed on to other level, he has a great journey ahead, and so do you. I bless you that from now on you’ll live for eternity. People will know you as ‘God of Wrath’”.

Parshurama saw Ganesha walking into the river and he drowned. Ganesha didn’t die from drowning, but evil inside him did. No one ever saw Ganesha after that incident. That day changed Parshurama’s life; he wasn’t same person back then. He gave up everything to live a Monk’s life. Half Tusker Lord was indeed a miracle of nature, that changed the course of mankind.

“This is the story of Half Tusker Lord.” said the Tusker.

He asked me if I liked it. I didn’t know how to respond to that question, I was drowning into ocean of thoughts. He then asked me in his polite voice, “What’s your name child?”

To which I replied “Veda Vyasa”.

He told me that future generation would remember my name. I wanted ask him how did he know the story of Half Tusker Lord precisely; but he vanished before I could ask him. Many times I think about that brief encounter, and deep down I feel that maybe the Tusker I met was one of the characters of that story. Seeking truth is like searching for pearls in the ocean. Only the difference is truth can be anything; it can be an ordinary stone or a sparkling gem.