You are here: Home / Social and Moral / The Master 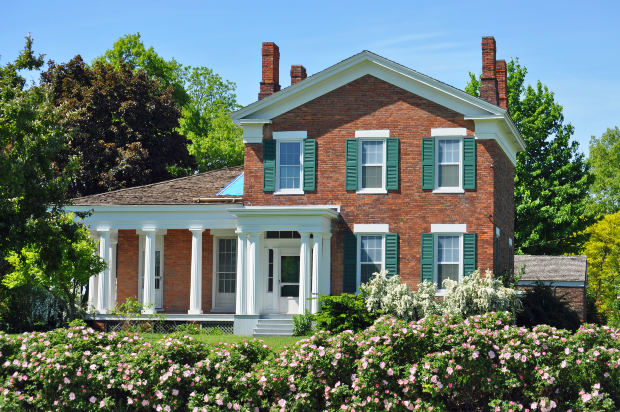 The dark clouds growled and wandered restlessly in the sky. Poovajji sat alone inside on a dwarfish tripod chewing betel nuts. She woke herself out of her reverie occasionally to spit the splashy vermillion juice from her hollow mouth. Dressed in a drab grey sari, she seemed sooty like her kitchen walls. Her eyes were like an unfathomable well. Her whitening brows wrinkled making her wrinkles indistinguishable from her brows. A frown.  Mumblings….  An impatient look. She was waiting for Girija to plait her long­ – once dark now grey –hair dangling down her back.

Everything else in that kitchen was as old as Poovajji. Once brown earthen pots now wore a dark look after years and years of being seated on the fireplace. They were brooding over the umpteen number of delicacies cooked in them over the years. Mackerel dipped in coriander and red chili, spicy eel and crab gravy, bamboo  shoots and mushrooms, rejuvenating aroma of curry leaves , ghee smeared on them to prepare payasam  …….all these mouth-watering reminiscences gushed forth and made the pots less gloomy. One earthen pot almost winced at the thought of Poovajji’s granddaughter boiling odorous medicinal oil to nourish her hair.

”She’s craving for attention these days,” it grumbled.

”It’s quite natural for her age. Don’t you see, she’s in her blooming sixteen .why are you bothered?” snapped the other.

”Oh not she but that odour bothers me. But have you noticed?  Seldom do words come out of her.When they do, it’s like the morning dews fresh and life giving’ But why is that silence in her?”

“Why doesn’t she speak?” rejoined the other.

“Why doesn’t Aragini (for that was her name, meaning Parrot) speak?”

Cutlery  largely made of bamboo sticks, the bowl of salt in the corner ,the churn, wicks, mopping cloth, firewood, mice in the attic… all echoed……….. “Why doesn’t Aragini speak?”

Human beings had stopped prattling about in that big house ever since Jawan sahib’s return. Jawan sahib was a soldier. Poovajji’s husband. Even a needle would think twice before dropping down and making a noise in his presence. So Poovajji never lost her needle, which was given to her by her mother when her first daughter Girija was born. Thus ran the village rumour. Girija was married off to a well-built man from the neighbouring village who claimed to be a soldier deployed in the Srinagar regiment. Jawan sahib was very disciplined and proud. He condescended to speak to the villagers sometimes. He spoke without reserve to none except his son-in-law. His son-in-law seemed to know everything that he knew. One day a village lad who had been in Mumbai for many years came back. He was rich, well-dressed: spoke Hindi and broken English. He had brought a new camera and a few photographs for his villagers to see. Those were the days when the camera was an object of awe to the villagers.

Joy sparkled in the smiles in spite of their yellowed teeth. They greedily peered into every photograph. Seeing Mumbai was like a dream come true. In most of the photographs the Mumbai lad was seen standing straight –as all set to sing the national anthem. Somebody recognized a face.

“Oh, come on, have you ever stepped out of this village? “

“That doesn’t matter now…I’ve seen him…but where?” He scratched his head.

“Huh! This one? (Pointing towards the face in the photograph) he’s a washer man in the regiment” said the Mumbai lad.

Word spread from mouth to mouth like wild fire, till it consumed Jawan sahib’s life. He shot himself dead.

His son in law never came back. Ever since, the big house has worn a mournful look. Its reddish slate roofs speak in the rain. Huge pillars in the veranda raise eyebrows and shoo away the breeze. Dust happily settles on idols of gods and goddesses. Broken chairs groan among themselves. Poovajji is heard croaking when Aragini comes close to her old trunk. Girija, Aragini’s amma, curses her mother. Aragini has stopped squeaking from a long time.

When the big house couldn’t remain silent anymore it began telling tales. With it, every object in the house began speaking. The water pot which accompanied Aragini to the village well was the most loquacious. Poovajji and her daughter never heard these voices in the house. For them they were old inanimate objects that reminded them of their equally lifeless past. It was Aragini who often overheard them speaking. Sometimes the objects even cursed her for eavesdrop