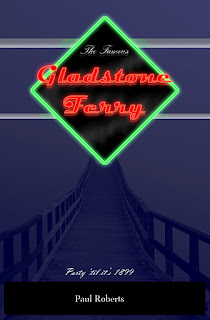 The station announcer spoke to all the New Year listeners of the top rated RAAT radio news corporation,

“Now it is the long-awaited New Year’s eve show coming live from the modern 7 story party venue that will wow the world for 30 years to come, World it is my pleasure, and my wife can verify that, to introduce you to Gladstone Ferry, man the women want and their husbands want to kill, Haaaaank Mingefield.”

As the station switch over took a short time to link up, the silent static filled the homes of millions of Hank fans and even more fans of modern radio music, the static crackle hissed and snapped to the Live Broadcast,

“Welcome all you groovy listeners out there on the modern virtual air waves, this is Hank Mingefield your guide through to next year and the next big thing. It is December thirty-first in the year eighteen hundred and sixty-nine and I am here for the inaugural trip on the Gladstone Ferry. Firstly and because I am being paid more than fifteen dollars to be your MC at tonight’s ceremony I need to say a thank you to our sponsors and the owners of Gladstone Ferry – Party until 1899, Gladstone Hooter. Now a word from the man himself, Mr Hooter, what inspired you to sink a great deal of your fortune into the extremely large paddle steamer with a deck for every musical taste. I can even see you have set up a deck completely for one of your other major businesses, Hooters bar and gentleman’s lounge in every major city for every gentleman’s needs. Tell me Mr Hooter how did this all come about?”

Hank finished his monologue and looked at Gladstone Hooter and nodded, Gladstone looked down towards the Microphone and lowered his head to it and said,

“Firstly Hank, can you not say the word sink in context with my boat again she might get a little nervous. As for my reason why, well my wife is the reason why, god rest her soul, she made my life such a misery for so many years, bi**h, when she passed on I thought what better way to take her family fortune than to piss it all up the wall. I accidentally knocked a spittoon over bent over to pick it up, on my way back to my almost standing position, I banged my head on the bar I was perching against and presto The Hooters brand was born. Something special happened to me after having a Hooters Gentleman’s Lounge in every state, I wanted to have something new, something never seen before so I dreamed up the Gladstone Ferry Music Festival. Sitting on the water and travelling around, the weather can’t harm it. Most up to date bands, new emerging talent and a lot of stuff you wouldn’t expect and only seeing it is believing it.”

Hank continued, “Thank you Gladstone, the man behind the Hooters Gentleman’s Lounge”

Hank walked towards the boat and continued with the broadcast, “Follow me now as we climb on board the paddle steamer that will, I am sure, become what the future can only describe it as simply the best and most advanced music festival of all time. As we climb the ramp from the dock on this very cool and clear night I thank Gladstone Hooter for putting this floating boat of excitement on the Mississippi and not somewhere a lot colder at this time of year. First thing that greets you is your staff, giving you notice and advice when needed, thank you sailor. Ooooh that is important, a big flashing red neon sign stating Please DO NOT fire your guns when there is a ceiling above your head. That is comforting For all you listeners out there in the comfort of your own home all I can say is seeing is believing, Yeeeha; Just so I will keep you tuned in and listening to your number one rated radio station in the world, coming up before midnight we have an interview with not one but two of the top bands around I will be talking to Stroke Gently from the Skin Bashers and I will be taking five with the five from Bar Fighters. We will be back after this word from our sponsors.”

Many radios all over the nation cracked and awaiting the jingling chimes of washing soda adverts, the buzzing beeps of telegraphic companies who have the budgets to purchase twenty-second jingles on the most sought after radio show that can be heard adorning the modern technical airwaves. The radio crackled again the static pricked the ears of every listener and Hank kicked in again,

“Welcome back all you lovely listeners, you wouldn’t believe me if I told you half the things this amazing boat has to offer the New Year revellers. But now with me I have Stroke Gently who is the lead stick master with Skin Bashers Hello Stroke”

Stroke said, “Hello Hank, before we start, have you been to the toilets here?”

Hank then chirped in saying, “Listeners I did shake my head to you all on live radio but Stroke caught me off guard with his less than rock and roll question about the toilets on a paddle steamer on the most party of party nights. Stroke it is almost the eighteen seventies you know everything is moving on. Digression has meant we need to move on now the midnight hour is almost upon us and I think you are a little dull for our listeners out there, Stroke Gently from the Skin Bashers it has been your pleasure. Ladies and gentleman let me walk you around the bits of the steamer that lie between here and my next interview. We are still on the middle deck, below us there are two decks one where the lighting is dim the wheels of steel are spun by none other than the Unsocial Techno Wrangler, the happening sounds and underground breaks are played and people dance around very quick and look like they are stacking the shelves in your local twenty-four hour supermarket with cardboard boxes. The other of the two has something that I have never heard of and don’t particularly want to hear about, it is the tribute stage all about fakers singing the songs of the groups they most admire. Playing right now and I can hear them are ZZ Toppers, figure that out. We climb the stairs to the live triangle stage where I can see my next interviewees just getting ready for the performance. Ladies and Gentleman I am side stage with Dave Growls and the Bar Fighters.”

Hank: Dave it is a new venue that only has the future to blame, how does it feel for you and the group to be playing this event?

Dave: Hank this is the bomb, I am so happy to headline the pre midnight crowd and seeing in the new year and the new decade, as you can see this deck is full and there are people trying to fit through the tiny windows.

Hank: How much are you switching up the set lists for tonight?

Dave: Well Hank we have these new electrical guitars so some blasting solos and duelling between two of us and every night is different. It’s really about reading an audience. I think it’s important that they understand that it’s not like a Broadway show or a video game, it’s human and it’s real.

Hank: We have only one minute left before you start and the audience go mental, what does the next decade have in store for you and your team?

Dave (With a growl): We are touring for three years and a new CD coming out in January and I think we are just going to get the stage from gig to gig and enjoy what the audience gives us.

Dave: Visit our website for updates @ www.barfighters.com for all the latest updates and a regular podcast, come to the show your money will be well spent.

Hank: Guys if only we had more time but you have two songs from your set before midnight and then I will on stage with you to count down the New Year and you will continue afterwards, best of luck to you all.

Dave: Hank a pleasure and see you in ten minutes.

“As you all can hear, now the audience for the Bar Fighters are making a noise that can’t be mistaken, you can listen to the next two songs with me hear and the New Year will then be upon us. Ladies and Gentlemen, the Bar Fighters.”

Hank announced and held out his microphone to the stage so the audience in the radio land could get the music directly into their homes live for the very first time ever. Every now and again Hank brought the microphone back to his mouth to show how excited he really is. As the second song was coming to the end and the stroke of midnight is looming Hank walked on stage,

“Dave can you help me with the New Year countdown, Ladies and Gentlemen we have fifteen seconds”

The guitars played to the countdown flitting from one to the other, the 10 second point came and everyone followed the big screen as the number ten appeared and turned to nine, eight, seven, six, five, four, three, two, the guitars built up to the point when Hank was in hysterics, “TWO, ONE” Hank launched himself into the air and over the audience as they carried him from the front and he said,

“Happy New Year world in it now 1870 here on the Mississippi, you have been brilliant. ”

The guitars thrashing loudly in the back ground and from one to another the audience passed Hank Mingefield to the back of the room away from the stage as he still shouted,

“Happy New Year, 1870. I have been Hank Mingefield for RAAT News Corporation in association with Hooters Gentleman’s Lounge, gentlemen lounge all over the world. I will now pass over to my personal friend and colleague who will guide you through the rest of the night, Fearne Cottonpicker, the painted goddess. Fearne”

The last words echoed throughout the radio waves all over the world as the crowd threw Hank to the floor at the back of the room whilst the Bar Fighters started their hard-core new year’s set.

Hank picked himself off the floor and walked down to the deck where Hooters Gentleman’s Lounge was and settled in and watched as the hostesses danced to great music. He pulled a bundle of paper money out of his pocket and ordered himself a drink and settled back.