You are here: Home / Social and Moral / ONE BY ONE LED TO FULL 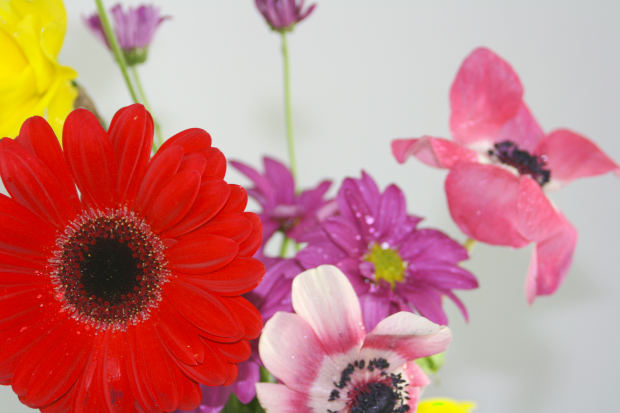 Moral Short Story – ONE BY ONE LED TO FULL
Photo credit: dmscs from morguefile.com

Once upon a time ,there was a person by name Chinky, she had talent to achieve anything , but failed to  implement completely due to distractions, laziness and previous failure haunts.

Her strengths include as follows:

what does she actually wish to want in her life?

She likes a comfort and peaceful life. what does she actually doing in her life?

She is wasting time in doing things said by her husband and her employer ie., she is doing household chores and office duty . And spending little time to make a decision or plan for her comfort life.

Then she started thinking that she gets distracted easily due to negative people surrounding her who always let her down. She feels like she is trapped by negative people, if she doesn’t do according to their wish, then her life will be more horrible. She compromised on her happiness and comfort zone.

She felt like she is living to die soon or waiting to die to end all this sadness or failures. She felt that she is dependent on negative people in her daily life due to which she can’t escape from them. Then she went little more deeper in her thoughts to find out “On what aspects of life , is she dependent upon?

Then she felt and questioned herself “Can she lead a life alone in this world?”

Her mind answered No. Since she is dependent  on negative people around her, she felt like she is trapped in her life and since she feels , she is trapped ,she felt sad more often due to which she gets  distracted often and also she plans things for a comfort life to remove this sadness from her life . Since her distraction is more often , she fails to implement her plan for a successful life.

Then She went on analysing her thought and decided she has to win in life challenges no matter whatever comes in her way.

She started planning one by one smallest things of her plan to lead a comfort and peaceful life.

She tried to implement smallest things in life fully with dedication and sincerity. Since it was the smallest task she finished it soon before distraction or sadness took over her .

On her first achievement of smallest task, she started feeling good that she has accomplished it . she is a winner.This raised her confidence and also interest to do the next smallest task. This process continued like this. Now try to implement next smallest thing,

After some months, she started feeling like she had overcome distraction to certain extent. She continued the process of implementing the next smallest thing of her plan, till she  felt like she is not  trapped in her life.

Once she got a feeling that she can escape from the trap of negative feelings and negative surroundings, she started analyzing the dependency criteria in her life with negative people and started leading a life in a manner that she slowly overcome the dependency upon other one by one.

As years passed, she started feeling that you no more dependent on anybody in her life. Due to this change, people around her started respecting her decision and stopped passing negative influence to her.

In this way Chinky slowly passed her life challenges ONE BY ONE  and successfully FULFILLED HER LIFE wishes.

Moral: ONE BY ONE start solving the problem and in the end there won’t be any problem in your life.