You are here: Home / Social and Moral / Darkness Behind Gold 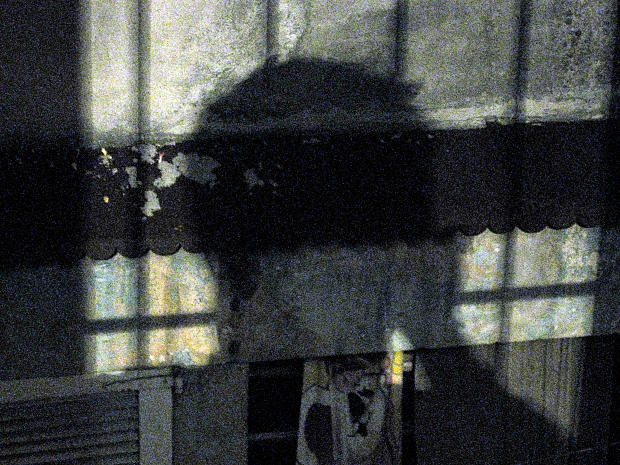 Twenty-two novice inmates inhabited the accelerating prison bus. All were shackled securely and watched by the vigilant eyes of four guards. In every seat, two inmates were restrained. Out of the twenty-two, by some chance of fate, only one sat in a seat solitarily. Looking at his posture you might have thought it was his throne. The body of his was captivated but the mind free. The convicts gained dread with each mile but he bared a smile. The number sown on his orange uniform: 039.

At last, the bus abruptly halted before the iron gates of the penitentiary. Its great walls coated with the heavenly tint of celestial white almost seemed to reflect the heavens. The rampant gates stood intimidatingly golden as if harboring the sun’s pure light within its metal structure.

The guards began to escort the convicts towards the gates and with each reluctant step every convict felt the abysmal sensation of one facing his tomb. The chains clattered and nothing felt more terrible than being led to oblivion.

The gates opened with no reluctance, all were welcomed for this stay.

A field of the healthiest, green grass introduced them with the calming odor of fresh pasture. More guards followed the convicts. In the far corner of the imprisoned field they could see the rest of the experienced inmates sitting on the grass, all of them admiring a preacher like orange flowers feeding off the sun. The preacher’s voice resonated throughout the field becoming one with the energetic wind. This preacher strode back and forth and released his energy on to the men as if motivating them to take part in a deadly medieval battle.

“Feel the elements, men, because these elements are the very caresses of God. This precious wind that now blows at our every pore is one of God’s many manifestations!” Every word thundered out of his mouth and struck unique parts of the soul. For some uncanny reason one had the obligation of shedding their mind’s armor when in the presence of this priest. Perhaps it was the apparent perfection of his gray hair which was combed back or the golden frame of his glasses. “Observe the world around you and you will discover the immense evidence of his existence. Look at the sun. This fiery immensity is a symbol of his vigilant eye!”

In a condensed row the novice inmates were escorted towards him. They walked like ghosts in penance for the others failed to acknowledge their presence. Once the priest addressed them, the veteran inmates finally observed them with interest. “Welcome, my sons. You are no longer lost in the throes of society. Your trek has ended. You all have reached your final destination.” In the mind of the priest it was a destination that would grant their salvation.

He surveyed all the new convicts and approached the weakest one; a twenty two year old man who had never been among a multitude of dangerous individuals. The attention that the priest cast upon him was his punishment for the wrong he had done within society. He wanted to be inconspicuous. That had been his plan the moment he set foot in the prison bus. Now all eyes where registering his debilities.

“Jack, I want you to tell me what you are feeling right now.”

“I’ll tell you what you are feeling right now, Jack. You are upset. The reason you are upset is because I have made you conspicuous among all these menacing men. Jack, there is nothing to be upset about.” He surveyed the group of men with a smile. “These men have found the attention needed to acknowledge the manifestations of God and that in turn has dissipated their violent hatred out of their organisms. These men are harmless, Jack. They have made every attempt that is within their disposition to accept that God is indeed real. They have succumbed to his great force. They have freed themselves of their malevolent ideologies and they are now in the path toward salvation.” The priest paused and inhaled a breath of fresh air. As he exhaled he said, “’Trust in the Lord with all thine heart; and lean not unto thine own understanding. In all thy ways acknowledge him, and He shall direct thy paths.’”

As if in coordination, the convicts who were seated on the grass approached Jack and took turns to shake his hand with peaceful grace. Jack awkwardly shook their hands with the limitations provided by his chained hands. Without a spoken word the convicts sat again on the grass while the novice inmates grew even tenser with this confusing behavior.

“Now tell me, son. What sin is the culprit for your incarceration?” The priest asked and placed his hand on Jack’s shoulder.

“…I killed-killed my mom,” Jack answered with the hope that admitting his crime would cloak his weak demeanor with an appearance of ferocious malignancy.

“Son, I want you to know that YOU have just made your first step in the path of God. By merely admitting your sin you have encouraged your repentance.” The priest abruptly grasped Jack’s head and pressed his forehead to his. “You made an irreversible mistake. Every minute without her has been your hell. Yes, she treated you like a boy! But confess that since her death you have replayed and replayed the altercation in your head a thousand times searching and hoping for a different outcome!”

Jack’s face turned red, stung from the truth. His body trembled with the fear of acceptance and tears began to mingle with his sweat. The priest dramatically released Jack’s head and Jack kneeled in despair, though not before the priest but before his sin. The priest had played the strings of Jack’s heart like a harp.

Gradually, he attended each new convict in the same enchanting manner until he encountered 039.

“What’s your name, son and what is the sin you are destined to repent?” the priest inquired.

“I have been stripped off my name and I leave the lamentations for my sin to my creator,” 039 replied.

The priest adjusted his glasses as if acknowledging the effort about to take place for altering the ideals of this young man. “Your Christian name remains registered in the mind of God and you alone are in control of your sins, my son.”

039 scrutinized the prison field at his leisure. He observed the guards carelessly staring at the priest. He seemed under a great spotlight beneath the sun. The wind assured him that he was alive. The priest was utterly confused and attempted with his eyes to pinpoint 039’s psyche but saw only cold futility.

They eyes of every individual present failed to register the rapid movements of 039. Within the speed of the winds he took hold of the priest while holding a sharp miniscule rock on the priest’s neck. Delayed with surprise, the guards aimed their weapons at both of them unable to lock target on 039.

“You created my being in the inception of your lustful thirst for boys,” his whisper traveled gently through the priest’s ear like poisonous gas. The priest felt humiliated as he recalled his continuous morbid lust for the innocent. “And this is my sin.”

039 lacerated the priest’s neck swiftly and when the first drop of blood alighted on the grass the convicts ran towards the guards.

Shots were fired but inevitability provided a convict with a gun from one of the guards and like dominoes the strength of the prison’s security tumbled.

039 relaxed on the grass and observed chaos reign.