You are here: Home / Social and Moral / RelaxAHHH 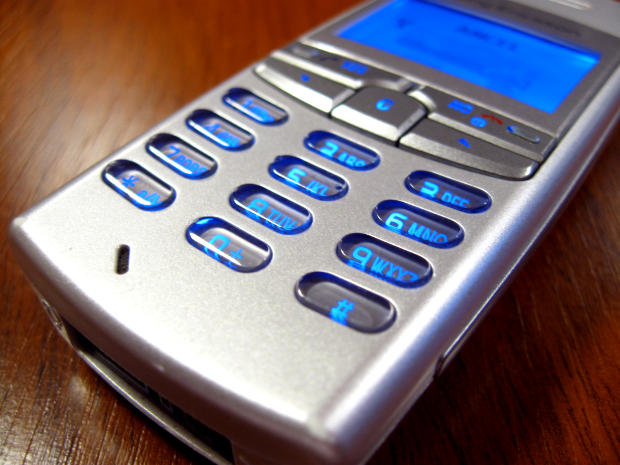 Sanjay‘s cell phone started to sing Titanic song, his special ringtone for his wife. He picked the call,

“Sanjay, its 10pm now, why can’t you turn up early at least today? Not much time left to board the train” Seetha said in an angry tone!

“Project pressure dear, I will reach in 10mins, you get ready, I will drop you in station” Sanjay replied.

He reached home, sent a few sms from his cell phone to his team mates and attended hard line calls regarding project. Meanwhile Seetha was ready with her baggage. It was her trip to Kerala, to meet her parents.

They started from home & reached the station. It was nearly one hour travel from their home. Seetha boarded the train at the right time. He gave her advices & asked her to send sms or call him in case of any emergency.  It was almost 12pm when he was back to his car.

His car gave him problem in getting started. After a few tiresome attempts, it started to move. Sanjay was quite panic, since it was the first time he was travelling alone at 12pm. There was no moonlight, road was too dark!! Sanjay was nervous seeing his car’s own light. Suddenly he heard a beep sound, he looked at his cell phone, it was a message from his wife,

He replied her back and continued to drive.Trees along the roadside started to dance wildly, the sound of wind and howlings of animals made him to sweat out of fear.

On the way of his drive through the dark road, a lady stopped his car. He had to give a sudden brake to halt his car.The lady was beautiful and wore a white sari. She asked him to drop her in a bungalow nearby, where she lived. He was more frightened but he was mesmerized by her talk and was unable to deny her request. He agreed to. The Lady sat beside him and the car started.

The lady directed him to her home, there were many twists & turns, he was afraid whether he will forget his route. He silently used his cell phone to see where he was actually going, his GPS showed only a graveyard nearby and no bungalow. His nerves started to fear more. Finally the lady asked him to stop the car. It was very dark & at a distance he saw an old bungalow. The lady asked him to visit her bungalow, he resisted, but she compelled him.

“No one wishes to visit us, you have come a long way, so you should definitely get in. Please come” .

He had no other option; he thought he was trapped by a ghost & followed her.

The gates of the bungalow opened automatically, the tall trees along the gateway were dancing violently. The doors and windows of the bungalow started to shatter and made wild noises. Sanjay was very frightened about his state. He entered the bungalow, to his sudden surprise, all lights were switched on. The lady was sitting with her family opposite to him. Sanjay saw the bungalow around and gazed at her family.

She introduced her family members to him.

”Oh nice, but I have not heard any of these names, by the way,what is your name?” asked Sanjay eagerly.

During their conversation, a little puppy came running inside the hall. It came near Sanjay and he took the little puppy in his arms.

Sanjay asked, “This puppy looks cute, what is its name?”.

”Its name is Money” replied Tranquilaa.

”Oh Yes money, I have heard about this name a lot, a familiar name and I like this name” said Sanjay.

”Yeah, all like him more than any one of us, they wanted Money to be with them all the time” said Peacaa.

“When people see him, they forget every one of us” continued Merciaa.

”Better leave him down Sanjay, he will dirty you, leave him aside, keep me near you, take me into your heart, your life will be awesome” said Relaxah nearing Sanjay with an attractive smile.

“Hey Sanjay, whom you’re going to keep with you forever? Are you dreaming” Seetha shook Sanjay and woke him up!

“Didn’t you leave to Kerala?” Sanjay murmured in a chaotic state.

“What happened to you Sanjay? Why should I leave to Kerala? You had a dream I guess. After 1 week of tedious project pressure, you came home early only yesterday. For the past one week you didn’t even sleep for an hour, didn’t speak to our son too. You were busy with your project for the whole week and spoke more with your cell phone . Since you lacked sleep, I didn’t disturb you last night, and you just slept as soon as you came from office. Thank God!! After one week of tiresome work, you slept relax, ah!!! ” Said Seetha

“Relaxah, Relaxah, what a wonderful dream, a dream which depicted the reality. Money is not everything which we wanted, the most important prerequisites are relaxation, peace, mercy, tranquility,harmony etc. Hereafter, you’ll find a change in my attitude, Seetha.  Shall we go out for a picnic?” Sanjay asked in a sweet way.

”Sure Sanjay, Thank you, Thanks for this change” Seetha replied him happily.

”This Thanks goes to my dream girl, Relaxah” said Sanjay to himself!!!