You are here: Home / Social and Moral / SHOW-OFF 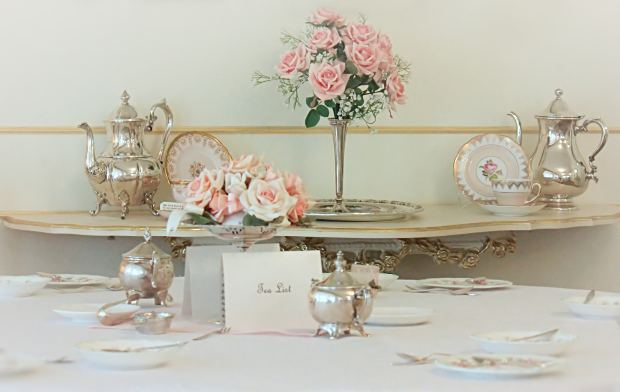 Once there was a middle class family in Mathura. In that family there were only four members – father, Mother, one son and one daughter. Daughter’s age was 22 years. Now parents wanted to marry their daughter with a well settled boy. Girl’s mother Geeta loved to show off too much. She always toned her husband for their poverty and said that he had nothing earned . Wherever she went she gossiped a lot.

Once her friend Seema Suggested her a high class family’s son Rajesh for her Daughter Riya. Boy was NRI businessman. Seema told Geeta,

“Rajesh’s parents are searching a bride for their son. And they are now in Mathura. Tomorrow at 2:30pm their train will leave for Delhi and from there they would go for USA. They are very simple and searching a pretty and cultural girl for their son.”

Geet’s daughter Riya was a very pretty. So she decide to show her daughter next day. Seema fixed the meeting next day at 11:30am.

Next day Geeta told her husband,

“We haven’t any furniture in our home. I haven’t any good Sarees also for me and my daughter. There is neither good bedsheets nor good crockery. How can we show her daughter. We would not leave a good impression on Rajesh family.”

Her husband told her,

“See Geeta, showoff is good. We should have to be satisfied what we have. And no need to showoff. They were coming to see our daughter not home, furniture etc.”

But Geeta did not understand and told her son Punit to go to neighbour’s home and borrow all things for four hours. Punit went and brought all things – line bedsheets, crockery etc.

It was a shining day. The house of Geeta was well decorated. Riya wore a heavy pink saree and make upped well. Her mother also wore nice blue pink saree. Any way it was 11:45am Rajesh and His parents came. After a while Riya came with nice silver tea set full off tea, snacks, and sweet.

Rajesh and his parents talk to Riya and her family. They liked Riya very much. Suddenly Rajesh’s Father received a call and came to know that their train was delayed for two hours. When he told it to Ritya’s family, Geeta was worried. She thought that how could she stopped her neighbour when they would come to take their things. She could not think any further.

Time passed and limited time period was over. One by one every neighbour came to take their thing. Even after trying a lot she could not stop her neighbour. It was great insulting moment. Rajesh family came to know that they were telling lie. These things were not their. They were very angry and said,

“We liked your daughter. We didn’t want any thing from you. There was no need to showoff, then why you did it. If you show your daughter in an old suit then also we would have liked her because we saw only quality of your daughter not her dress. It was very bad.”

Geeta felt too much guilty. She admit her mistake and said sorry to them and promised them that she would never use wrong way for showoff.

MORAL LESSON:- We should always be satisfied with what we have.