You are here: Home / Social and Moral / Anjali and the Painting Exhibition 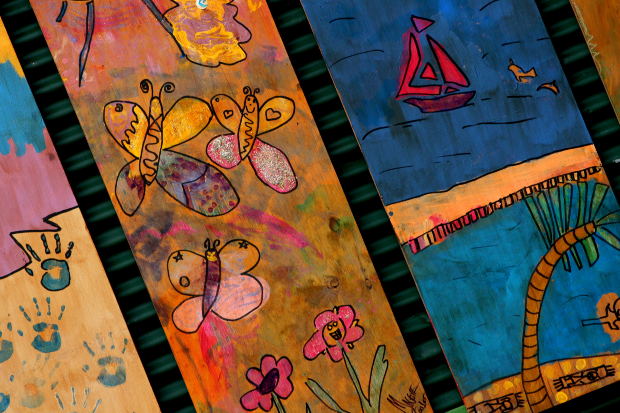 “Madam, kindly take this painting, this painting is my father’s best painting only for Rs.100” said the little girl of nearly 12-13 years age with brown eyes, uncombed hairs and wearing a frock which was little muddy but her colour was pretty fair.

A woman looked out of the car but suddenly a person sitting besides her knocked “What are you doing? You are going to visit the City’s best Painting Exhibition and watching towards footpath to purchase a Painting”.

The girl again cried “Madam, just take a look on the painting it is very beautiful, I am trying to sell it since morning 6 a.m. as my father is ill, but no one purchased it till now, its11.00 am”.

The man in the car directed the driver to move and the car moves on.

Suddenly, some lady from behind called her “Anjali, my little baby, I am going to town hall where a Painting Exhibition is going to be held in the evening, I have got a job to serve them food and to wash utensils”.

This lady was her mother and the girl name was Anjali.

Town hall was situated in the heart of the city, huge space , fully furnished and decorated, having a large parking space. The hall was all surrounded with high society people as it was one of the biggest Painting and Art Exhibition of the City accompanied by people from the weaker section of society who were present there only for the service of these high society peoples. These peoples were driver, security, catering staffs etc.

Most of them were busy to show their status of wealth, power and fame and giving their best effort to grab the attention of the people around them.

The Art Exhibition was going to start at 5:30pm, it was a competitive Painting exhibition with a Jury who will judge the best painting and that painting will be awarded 80000 USD and the award money will be given to the creator of the painting.

Finally, Exhibition started, there was all kind of paintings by famous painters but the painting which won in the competition was the most attracting one. It was of a baby girl selling flowers on the footpath. The judge pointing towards that painting and said “The Jury had decided this painting as the winner and it is creation of none other than Mr. Ashish Sonkar who is famous for his art and winning this competition from last five years”.

“No this is my father’s painting and this man had purchased it only for Rs.80/= after complete bargaining” a girl raised her voice from behind and that was none other than the little girl Anjali.

Judge asked : who are you and how do you reach here?

Judge : How do you know that this is your father’s painting?

Anjali : My father draw paintings and sell it on the footpath. Today I was selling the painting on the footpath as my father was ill and this man purchased it for Rs.80/- from me and now he is saying that he had created it.

Then Anjali shouted – Please keep quiet and listen to me – I have proof that this is my father’s painting as you can see the alphabet “RR” on the back side of painting and this denotes none other than my father “RABI RANJAN”.

Mr. Ashish interrupted – There are a lot of people in the universe whose short name is RR that means this painting belongs to them.

Actually friends this painting is dedicated to my friend “Rohit Raj” and “RR” represents “Rohit Raj” and infront you can see the tag of Ashish Sonkar. I have completed 3 year degree course in the best institute of Art and culture in India. Then I went Canada for 1 year special course in painting and now these people from footpath claims that this is their painting – what a joke!

All the people in the hall supports Mr. Ashish Sonkar but the little girl was persistent on her words and was crying that this painting is created by her father.

Then in between these strong conversations Anjali’s mother came and Ashish scold her ” you footpath people can’t control your child, she is creating disturbance here”.

She with angry voice ordered Anjali to leave the exhibition hall. Anjali denied and was repeatedly saying you are a liar this is my father’s painting. Then Anjali’s mother failed to hold her anger and slapped Anjali.

Anjali was shivered, look toward’s her mother face with her wet eye’s, her mother hold her and leave the exhibition hall.

They reached home, her mother started explaining her daughter ” Dear Anjali – Our painting is our painting till it is on footpath, as soon as it left the footpath and reaches to the high society, it is not ours. We cannot afford to say the painting at a place like Town Hall to be ours whether it is created by us. This event is not new but your father is supplying his painting to this man from last five years and doing the same to many others like this man. In return we get something which helps us for our survival”.

Now the girl Anjali understand the bitter truth of life that in the world of fabricated people Creation is not important – Marketing and branding is most important.

It is sorrowful to see a farmer, who creates and cultivates crops, living in poverty, but by selling the same crops, the trader’s house is full of wealth.