You are here: Home / Social and Moral / Are you with me? 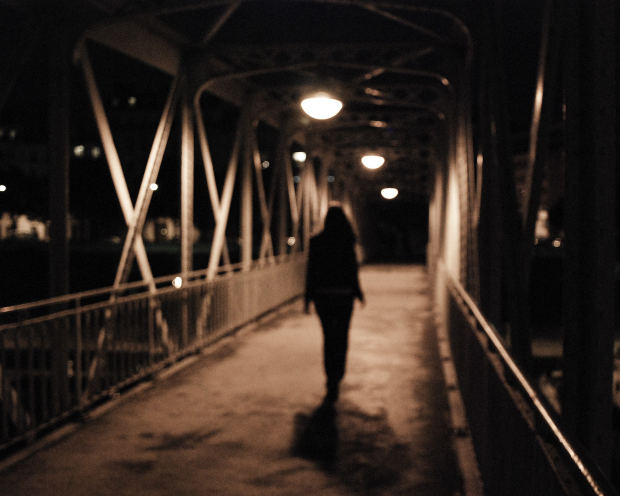 Social Short Story – Are you with me?
Photo credit: NinoAndonis from morguefile.com

I scanned the garden carefully only to find the corner seat of it unoccupied. I quickly paved my way towards it and occupied the half portion of it. I withdrew my smartphone from the pocket, plugged in the ear-phones, ARE YOU WITH ME of Lost Frequencies was the new track I downloaded, I played that, swayed the volume button upto the maximum and I was in my own world. I created it.

Sang the melodious voice on my ear-phone. The garden was almost evacuated as you can’t expect kids dodging the football at 1am amidst the dreary night. The whole world was slumbering around me, except some few yougsters in the garden who occupied the rest of the seats the garden owned. Some were talking over the phone, I don’t know who were interested to talk to them in the middle of the night, some constantly checked the screen of their phone, as if they were waiting or expecting someone to message or call them. They were all dire and desperate. I saw a couple whilst I was busy scanning the people around me in the garden, they were happy and cuddling, I wondered they could not afford a hotel so they decided to expend their night in the garden.

Recited the ear-phones again. The song consisted only a paragraph, but it’s melodious and pacifying music consolidated my mind. I tried some dance moves of myself over the beats of the music until I discovered my seat in an unsteady and prompting state. I realised that the other half portion of the seat I sat on was occupied by someone, I guess by a male, I expected that. It was by a Female.

I was’nt surprised by a female occupying a seat in a garden at 1am in the middle of the night solitarily, as I interpreted that she must have been back from her job and embarked herself in the garden to get some quality time for herself. She pulled a novel from her handbag and started searching for the page she halted reading last. After she found the page she resumed reading from the next page. I was surprised by this act of her. I have’nt seen anyone reading a novel in the garden in the middle of the night. I decided not to pay heed to her and continued to enjoy the music I was playing.

“A pull?” she asked me as I sat firmly on the couch, paused the music and drew off the ear-phones from my ears

“Yeah, sure” I replied snatching the cigarette from her fingers. I did not hesitated as even I smoked, and watching her smoke aroused a desire in my mind to smoke as well. I pulled a long whiff and then handled the burning cigarette to her. After a short intermission she spoke again.

“So, even you are broken-hearted?” she asked with a firmness in her voice.

“What? No, not really, I am here to expend some time in solitude” I responded with a faux grin and a expected surprise.

“People expend time in solitude because they are broken-hearted. Your smile verbalizes all you have in your heart” she peered straight into my eyes. I could not resist but to witness her colossal, smudged and kohl-free eyes.

“Are you broken-hearted?” I asked her as I averted my eyes.

“Yeah, obviously, Who has escaped this situation. Everyone gets hurt, so do I.” she responded as she handed me the ciggarette again.

I took a deep puff and then returned her.
“How did you wangled the situation?” I asked her fuming the smoke.

“Ciggarettes have assisted me enough to deal with it” she laughed in a sarcastic mode. “You dont have to fix the things every time, it gets fixed by itself as the time streams on” she added absurdly.

“You mentioned every time, what if every time is replaced with sometime? What if the things gets fixed only sometimes by itself?” I oppugned her.

“If you can just imagine, life is like a movie which we watch for the continuous three hours at the multiplexes. We are allowed to only watch the way director has directed the movie. Even if we want to add a specific shot of what we think, we are resisted from doing so. Director of your life are people who govern you, you do what they want you to do. And this is the reason the bugs of your life are not getting fixed” she articulated puffing the last pull of her ciggarette.

“Do you mean you don’t have anyone in your life to command you?” I protested.

“Yeah, I do have, only a bunch of people whom I trust as they have been a integral part of my life since I was a kid. My parents, and a few set of friends. I am certain, I don’t have any erroneous guy in my life.” she responded as pride flickered on her face.

“How to judge those erroneous guys?” I asked her in a mild and gentle tone.

“If you can’t determine the wise and repellent, I guess you still need to experience some harsh lessons of life. Immature is the only term I can describe you.” she answered with a gentle smile.

“Maybe, I have’nt experienced enough of life. I have not met enough people and confronted them. Yeah I have let my heart to be broken by a girl and that’s the reason I always try to witness solitude.” I replied to her as a deep pain pinched my heart.

‘Trust me, you will acquire the lessons of life as you proceed further in your life. And do not revise the same lessons again, life is too short to learn the same lessons more than once. It’s already late and I need to reach home and get enough sleep, else if I get late to the office tomorrow, boss is going to kick my ass. Good Luck for your life, Bye” She slit the novel into her hand bag again and stood up from the couch and waved her hand to bid me adieu.

“Yeah Bye” I waved my hand too to bid her bye.

I bought my mobile screen into the motion, penetrated my ear-phones into my ears again, resumed the music and I was in my world again, which I created.

The ear-phones sang again. I wondered how my ear-phones got the tendency to read what my heart spelled at that instant. Sometimes some unexpected people teach us the prestigious chapters of life and we tend to remember them for the rest of our life. She was one expected person I would tend to remember. Trust me, not everyone will detriment you, some will let you feel the embrace of their affection in a most unexpected way, like she did.