You are here: Home / Social and Moral / Champion’s Limbo 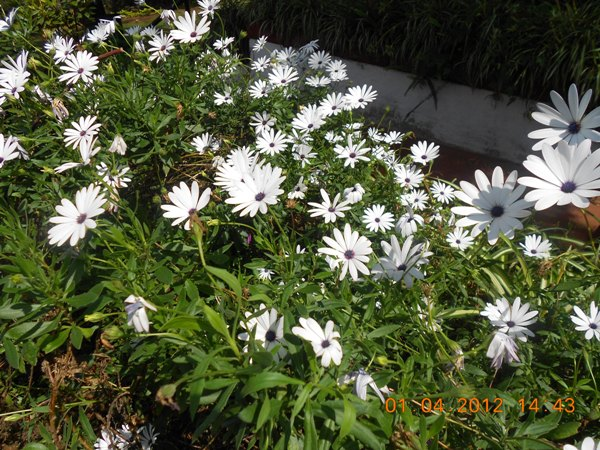 “Get up Ravi , Get up Ravi” , his mother called out for him . Blinded by a desirous future, captivated by the lazy mind and enjoying the warmth of his blanket, Ravi refused to open his eyes. Just as it is  prevalent in any Indian household,  Ravi’s father poured a bucket of cold water to get him out of his coffin. Unflustered Ravi stayed there. His father shouted ” Girlfriend aayi hain” . At once Ravi got up from his bed.

Little did he know that it had been a year since his breakup. But the call of love rises a man from the deepest of unconsciousness ( Laughter pause). Father said ” Uth gaye ” .

Ravi hesitantly replied “Ji Papa” . Now get ready for your tennis lessons , you are getting late his father said. Ravi was a state level tennis player and his dream was of playing the grand slams. Ever since his break up , he toiled even harder . His coach was happy, his parents were happy, but was Ravi happy. He had dreamt all along to be a tennis player but he also wanted her to be by his side. It was very necessary of him to eradicate the base upon which he toiled.

As unhappiness couldn’t lead you very far. Slowly and steadily he developed  love for the game and this time the base was a righteous one. Balancing his internal rationality and external killer instincts , Ravi won many championships around India and eventually became a national level player. Time had come for the “Commonwealth Games” selection. As Ravi had grown from an emotional wreck to a strong individual, much was expected from him.

He prayed to god a night before the selections, remembered his beloved and took his parents’ blessings. Maataji was as usual in tears. “Munna badda hogaya” she said. Next day with determination in his eyes , Ravi entered the tour bus.  Meanwhile , Raja had a fight with his father over his dream of owning a motor shop. Father refused Raja to give the money for motor business. Instead he forced him to join the family business. Sadness had doomed upon Raja .He went to “Chikni Chameli”depressed and sad. Ordered the family waiter , a Khamba of “Blenderis Piride”, his father’s favorite.

He let the unhappiness percolate down his veins with each drop. Seeing his dreams crash upon him like a wildfire, he took to the keys of his new “Ashok Leyland” ,”gifted” by his father for the family business. Blinded by his foolishness, seeing a dead end, he crashed into the tour bus. Ravi lost his arm and his career. Raja lost his “life” , jailed for  his folly.

“Ravi beta uth jao”,   ” Raja beta uth jao” came two voices among the usual chittering and chattering of two common Indian households. As usual these lads lost in the trauma of the wildest dreams they had ever seen , were forced to get up by their parents. Ravi and Raja were two common students , living a life full of dreams and aspirations got up with a new meaning to life.

Realizing that life had given them a second chance, they fell to their parents’ feet crying like helpless 2 year olds. Life had a new meaning for them.

Or did it not. Was” that their real life and this their dream” or vice versa. Can’t Tell…

What if you got an opportunity to control your dreams, you would obviously want to fill it with all the fun elements and goals that you could never achieve in the conscious state. So in the dreams , one is ready to break the shackles of worldly perception, but in the human life he doesn’t want to . Why this discrimination ?

Message- So guys, Dream as you live and live as you dream . DREAMING IS LIVING.