You are here: Home / Social and Moral / THE CHILDREN’S DAY 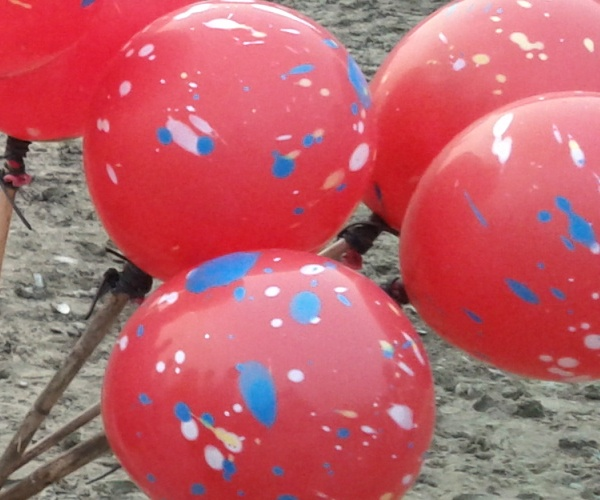 I was on my seat the train started with a whistle.

Suddenly my phone rang and that was my daughter’s call. Sheena my 8 year old daughter was preparing for celebration of Children’s Day.

Daddy were are you?

Sheena I am in train. It had just left from the station and will reach Raipur tomorrow.

Nice! Daddy when you will back!

Today is Saturday, I will be back on Thursday.

Daddy, I will wear the new frock you purchased yesterday, for attending the Children’s day function in my School.

The conversation ended and suddenly I hear some loud voice in the train and find that few people were beating someone.

When I go near to the crowd, saw a little boy nearly 13-14 years of age, torn clothes, holding the shoe polish toolbox on the back crying with tears saying a single sentence

I haven’t done anything,
I haven’t taken anything.

I requested people to stop beating him and came to know that the little boy was accused to steal a smart phone.

They said that the boy was watching towards mobile phone with longing eyes and was searching something near their feet. The women said , “Just after the train left station, I went to toilet, my son was near the door and my husband was sleeping and in the meantime this boy stolen the smartphone”.

“I don’t know where it is, I was just watching towards shoes because boot polish is my job”- replied the boy

No-one was there to listen the little boy because the mob had got an opportunity to evaporate anger, depression and frustration of their daily life by beating the boy. Anyway police was called, complaint form was submitted against the boy and the little boy got arrested. The boy will be kept in Railway Police Force lockup in the coming station and that was Kharagpur.

I don’t know why I felt mercy for the boy. I get down from the train in Kharagpur.

I met the police. After few formalities and payment of necessary fees arranged for the bail of the accused boy.

The boy was thankful to me, his name was Sanjay. Sanjay said to me – Thank you Sir for my bail and believing me that I am innocent.

I don’t know you are innocent or not but as you are of very tender age, I felt mercy for you – I replied to him.

Sir, Please come to my house and I am sure you will be able to understand that I am innocent.

It was Saturday and next day was Sunday so I was having enough time to spent somewhere. The boy was injured because he was beaten-up in Train so I felt it would be better to drop him at his house.

His house was in a nearby village. He took me to his house which was made of mud and clay. It was looking like a house of ancient times.

“If you are not aware let me explain that still in Modern times of 21st Century when construction sector is growing and blooming rapidly, you will find houses made of clay and mud in different rural parts of India.”

The boy entered his room with me. The boy with his mother were living in a miserable condition.

The boy said to me – I don’t have anything with me except this roof on my head and the lesson of honesty what my father had taught me before his death. I can do anything but cannot compromise with my self respect and honesty. Hope now you have understood that I haven’t steal the smartphone.

The boy was much more matured than his age and all the words uttered by him was 100% true.

The boy was in such a situation that his Mother was waiting for his son to come and bring rice from the money he had earned today so that she could cook food in the evening.

I purchased for them 10 kg rice, 10 kg pulses and some vegetables against their will but this was not going to last for longtime.

The boy has to struggle for his battle of life alone to fulfill his daily need.

Hunger is the biggest disease in this world.

I continued my official trip and when I was returning by train, I again find the elder couple in the same compartment.

I wish to speak to them asked about his tour and then asked –
What about your expensive smartphone? Did you get back from police?
The couple started laughing.
I was unable to understand why they were laughing. I asked curiously what happened?
They said – Actually in Kolkata my little innocent and shy son was having an affair with a girl RIA.
I asked “then”
Actually RIA came to meet my son in the station. My son had gifted the smartphone to his girlfriend RIA before train had left station.
Then why you blamed the little boy?
Actually we were unknown of the fact, later we came to know about it from his friends.
Then what punishment have you given to your son?
What rubbish are you talking about. Can I punish my Child and specially on Children’s Day. We had presented him a new smartphone. This time little more expensive of 22000 rupees.
Then you should take back the complaint against the innocent boy who was arrested by police for your smartphone.
They replied – Who will go into long formalities and Botheration for the street boy. These street boys are used to for this type of situations.
I was disappointed and felt anger from the couples reply but was unable to do anything.
I just moved from there. Sat down on my window seat and saw from the window the little boy Sanjay moving fast towards train – shouting boot polish – boot polish.

Suddenly my phone rang and somebody send me a message – Happy Children’s Day.

Note – All Character and events are fictitious and not real.