You are here: Home / Social and Moral / The Denial 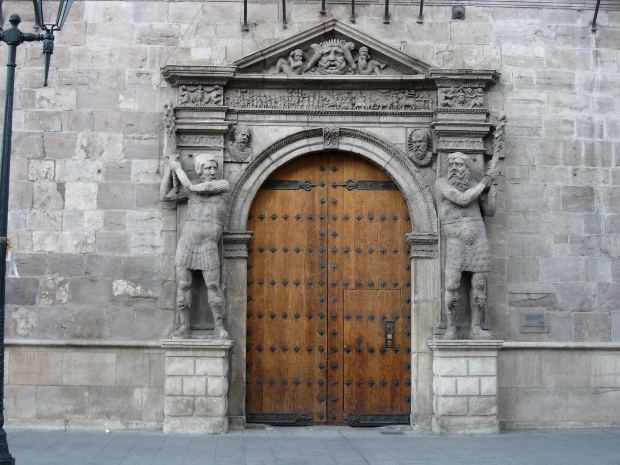 The iron door was larger than he had thought. Knocking it was the next instruction he had been given downstairs. The fancily dressed specimen who stood by the door, with an unwelcoming expression, raised his eyebrows interrogatively once the doors were let open miserly. His face gave no traces of grace, and the loose clothes hung on him didn’t evidently seem his own.

Delivering his finest smile, Demi produced his portfolio to the attendant. Shrugging at the neatly filed sheets, the attendant opened the door further. Recalling his childhood memories of grandma emphasizing on entering a house with the left leg, Demi decided to stick to his custom. The capacious hall introduced him to a narrow lane.

‘So the guys had been right in describing the place as being uncannily creepy’, thought Demi.

The attendant resorted to not utter a word till they reached the end of the lengthy lane. Lights illuminating the comparatively smaller room distracted him of the wooden door which lay ahead. A siren ran across the hallway. A few guards shrouding one of the executives marched diligently to the front door from one of the rooms in the hall.

‘Seems we have more applicants today’, remarked the attendant coyly. So he isn’t a robot after all, thought Demi childishly. Signaling towards the array of chairs circling one of the sides of the room, the attendant left Demi to wait for his call. Piqued by the disparate time his watch and the clock which sat on the wall flaunted, he searched for his phone. The leather bag just offered his portfolio and a pair of spectacles.

‘How could I possibly forget the frisking downstairs which left me with almost nothing to carry, let alone my phone.’ Demi muttered in a tone which suggested contempt.

Relaxing his bruised back to the cushions of his chair, Demi fed his eyes to the empty chairs which stretched beside him. He had been punctual. A couple of minutes passed and Demi scowled at the wooden door which hadn’t responded to his wait, respectfully.

The novelty of the interview drove him to release sweat out of his large fingers. Rubbing exhibitions of his nervousness to his trousers didn’t help him get rid of them. Although, he had prudently sought a few words of wisdom from his acquaintances downstairs, unscrambling those words required effort to be put in. Demi wasn’t prepared for exerting himself any further.

The preceding days had been tiring, being pinned against a queue which promised no end point. Even the discomfort of famishing him for two prolonged nights had failed to allure him to return. Summoning confidence of pulling it through successfully, Demi rocked his head consolingly.

The attendant confronted the impatient applicant once again. He was glaring thoughtfully at the marbled ground. Handing him his token, he waited for Demi to pass a word of gratitude. Demi threw his face down instead. Returning angrily, the attendant analyzed the list of prospective candidates for the day. His eyes carved onto the dining table which called his hungry stomach. Even before sufficing his bodily need, he slipped two muffins into his large pockets.

Within a couple of minutes, the attendant found himself granting those muffins to the ungrateful applicant. Demi grabbed them without a single thought, trying to consume them shamelessly. In his fatuous attempt to quell his uncontrollable starvation, he didn’t notice the attendant slipping away, a second after those muffins were granted to him. The muffins had grabbed attention of his body wholly, and nothing gave him incentive enough to raise his head up before gulping them.

‘Thank you, sir!’ exclaimed Demi, embarrassed by his own voice echoingly returning. The attendant had gone once again, Demi left to himself.

The screen displayed in front of him has been giving 24 since he sat here. The next number would be undoubtedly his. He forced himself into taking deep, sufficient breathes. Tapping his feet anxiously to the ground he went through his portfolio once more. It read his name incorrectly, Dimi, the fear he used to share with his mother. They could have given me a much simpler name, rather than me trying to clear it to the world, thought Demi.

Brushing aside the debatable name issue, Demi underlined the column devoted to ‘spouse’. He hasn’t seen her for a week now. The absence of her ringtone pricked his mind. Though memories woven along their unpleasant married life didn’t nag him, the void felt inside drank his peace.

The clock pushed the minutes hand a little further and Demi’s ears danced to the melodies heard from nearby. ‘So, upstairs even the choir is melodiously satisfactory’, Demi whispered to himself. Surveying the room closely made him conclude that the rooms were smartly fitted with speakers which transmitted sound religiously.

The number fell on 25 and the screen called him. Carrying himself with a gullible conviction, Demi stomped till the wooden door. Reaching there left him to a minute pause. The voice which graced his ears as soon as he pushed the door to the other side was assuring. It audibly welcomed him officially.

Demi lost his wits in realizing that he had just one interviewer warming the majestic chair which centered the plain room. The clean shaven young interviewer surprised Demi with his friendly gesture. Pulling his chair, Demi tried to comfort himself of the awkwardness which awaited him. Presenting his portfolio, he waited for the next signal.

‘Hmm, you do qualify to being a member, though some questions need to be shot as a matter of formality’, said the guy in a polite fashion, scuffing the sheets to his large fingers.

Re positioning himself on the plastic chair, Demi threw himself to the interviewer’s lips. The words tickled him.

‘So, why exactly do you find yourself eligible to be a member?’ enquired the interviewer. He found it convenient to use the regular words for the once-businessman.

‘My portfolio clearly defines my philanthropic activities in the past, along with the track record of funding church feasts for the past ten years. Although I didn’t expect such an early call, your invitation wasn’t one which could be ignored. Further let me draw your attention to Anna, the orphanage I have owned since the past four years, sheltering almost 40 unprivileged children.’

‘But it doesn’t mention anything of your visits, or direct involvement in the operations of the orphanage’, remarked the interviewer sternly. ’The only thing I can infer is that you were just one amongst the 8 member trust behind this institution. How can you possibly link yourself with the charitable trust which thrives on the hard work put in by the 60 odd staff working in it, your money just being an icing to the cake?’

Demi’s trouser pushed him towards the end of the cushion-chair. His buttocks pleaded discomfort, throat was found parched indefinitely. The interviewer had done his home-work well. Spinning his token hastily, Demi said,’ you surely don’t intend to miss the Philanthropist of the year; I was awarded by the state government last year.’

Ignoring Demi’s evidences of charity which seemed more or less brags to him, the interviewer moved on to the practical side. ‘You seem to have shared a distorted relation with your wife over the past one year. Any particular reason you are willing to mention?’

The query shrunk Demi’s eyebrows, frantically rubbing his sweaty fingers. Gathering enough breathe, Demi said, ‘Anne chose to embark on a new journey along with her newly acquired love interest. Being the old guy I am, I didn’t try to stop her. She chose him over her husband of 15 years, I chose myself over her.’

The words had been carefully selected and placed. The tone was devoid of morose, yet it had seasons of regret. The interviewer didn’t seem keen to bury the past so easily.

‘But, as a matter of fact, according to the information I have been provided with, your wife leveled charges of marital rape during your divorce trials’, said the interviewer without the slightest sign of sympathy.

‘Apparently, everyone leans on the female side nowadays. I don’t even remember the last time I patted her, let alone rape her’, remarked Demi casually. Flipping pages of the past had been something he wanted to avoid. Yet the urge of pulling it through left him helpless.

‘Perhaps, it might interest you to know that she too would be visiting us today’, said the interviewer in a serious tone.

‘Gawd! That parasite intends to follow me till here. Although I seriously doubt her eligibility to even apply, her personality is one charming one’ lipped Demi playfully.

The interviewer was shocked of the shallowness of the statement. The test was turning informal in nature. Demi had started opening up. His bottled pain sought shelter in the aroma of the heavenly abode.

‘Would you mind throwing light on some of your regrets regarding past?’

‘Well, I have encountered umpteen unfavorable situations in life, although my mother leaving me at the age of 17 stands bitterly indelible in nature. She left me with her drunkard husband, and died a year later. She ran with my month old sister. I tracked her down with great difficulty. I grew her up under my protection, yet ended up marrying her off to a drug addict. Her wails couldn’t shake my conviction of being compassionate. She too left us a few years back. Her blood cried at me, yet my monstrosity surpassed it.’

‘Would you want to reconcile for that? Or is it just the squeals of a prepared actor I am hearing?’ asked the interviewer doubtingly.

Demi adopted silence. The door had opened a bit. The clatters from outside permeated the interview room. It was a female voice yelling. He was familiar to that voice. It was Anne.

Scribbling notes over a plain sheet, the interviewer handed him the document. The interviewer pointed towards the other door.’ You need to show this sheet in the purgatory department downstairs. It wouldn’t be a few months before you join us Mr. Demi’, said the interviewer proudly.

The interview was evidently over. His fate had been decided. But he no longer was thinking about it. He was losing on something. The loss disturbed him, though he couldn’t define it to himself.

Demi couldn’t resist asking, ‘Can I meet her by any chance?’

‘I am sorry Demi, but I cannot allow you to meet her under the authority designated to me, unless she too pulls it through’, said the interviewer regrettably.

Dragging himself reluctantly, Demi pushed himself out of the second door. He recollected the night he had mercilessly portrayed his sexuality on his wife. The alcoholic slumber numbed him of her screeches. She pleaded him. She begged him. The devil in him didn’t pay any heed.

The stairway led him to a compact hall. The washroom had been neatly placed in one of the corners of the room. Entering it, Demi hastily looked for tissues. The tears were rolling incessantly, his mind denying ownership. He had lied once again. And he missed her once again.

Showcasing pseudo strength, Demi extended the sheet to the receptionist at the purgatory department. Handing him his P-card, she pointed out to the cab which was waiting for him. For the first time in the day, he felt undeserving. Sitting in the cab, Demi saw the doors of heaven close behind him. His journey to heaven had begun.