You are here: Home / Social and Moral / Do you want anything? 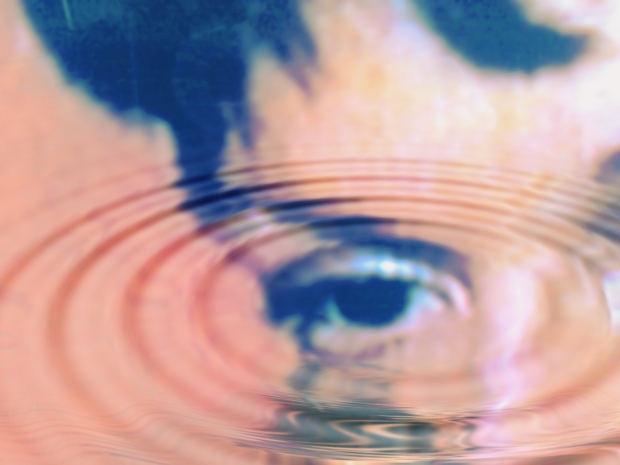 Short Story Social – Do you want anything?
Photo credit: clarita from morguefile.com

“Come inside Chotu”, said Krishna as he dragged his new friend Chotu who was hesitating to enter the big bungalow.

Chotu felt so intimidated as he saw his rugged clothes and the thought of him entering the lavish bungalow. It didn’t look like house but a palace. Chotu and Krishna were studying in grade 4. Krishna belonged to rich family while Chotu came from a poor family which was solely run by his mother. His mother managed the family expenses by being a housemaid. Chotu was an understanding son. He knew how much his mom was struggling and never once asked his mom to buy him anything. When he sees other kids in new clothes, celebrating festivals, his eyes would beam with desire but then he would remember his mother’s struggles so he would never let his escape his mouth.

Krishna’s father was the city’s famous businessman and Krishna was the only child to his parents. If he had eyes on something, the next moment the thing would be bought. That was how his parents were to him.

Chotu and Krishna became friends while playing a Kabaddi match in school. Krishna had been asking Chotu to come to his home for the past one month but Chotu had been giving one or another excuse for not coming but he couldn’t escape that time as Krishna forcefully dragged Chotu to his home.

The dishes at the table made Chotu drool. He tried to control himself from eating too much reminding himself that it was his friend’s home and he should behave decent. But as soon as he started eating, his logical mind took back seat and he ate more than he could. He even thought of asking Krishna whether he could take some dishes to home but then dropped the idea looking at the servant who was staring at him.

Krishna then took Chotu to his room and showed him his electronic toys. He even had a music system. It all looked like a dream for Chotu. They played with Krishna’s toys for the next one hour. After some time, a servant came to Krishna’s room after knocking the door. Chotu wondered why the servant knocked the door before coming in as Krishna was just a kid. But he realized that Krishna was their boss.

The juice was so cold that Chotu dropped it. He was more than frightened as he remembered how the woman scolded him when he accidentally broke a water-glass in her house where his mom worked as a house maid.

“Hey Chotu! What are you doing? Go wash your shirt”, said Krishna.

Since Chotu was hesitant, Krishna took inside his bathroom.

“Your bathroom is bigger than our house”, exclaimed Chotu and stood still.

Krishna opened the shower above Chotu and started giggling as Chotu got shocked at the sudden touch of water.

“What is this?”, Chotu asked as Krishna dragged him into the bath tub.

“This is bath tub buddy”, he said taking the hand shower and spraying the water over Chotu’s face making him laugh. They played in water more than 20 minutes.

It was getting late and Chotu had to go home.

“It was wonderful”, said Chotu when he was about to leave.

“Wonderful to play with you too”, replied Krishna. Just when Chotu was about to go, Krishna went running to him and asked him whether he wanted to take anything with him. Chotu hesitated as usual.

“That means you wish to take something. Tell me, what’s it.”

Krishna was listing many things but Chotu was denying everything.

“Can I take the water from your bath tub?”

“From bath tub? Why? You mean you want the bath tub. Don’t worry I will ask dad to order a bath tub and get it fixed in your home”

“Yes. I accidentally drank the water and it was not salty. It tasted good. In our home, we can’t get water like that. Water is always salty and to get that salty water, mom has to wait in a queue in the street. Can I take it? Just two buckets so that Mom need not go to fetch water tomorrow and take rest in the morning.”

As Chotu finished his speech, Krishna’s eyes were filled.