You are here: Home / Social and Moral / GOLD CHAIN 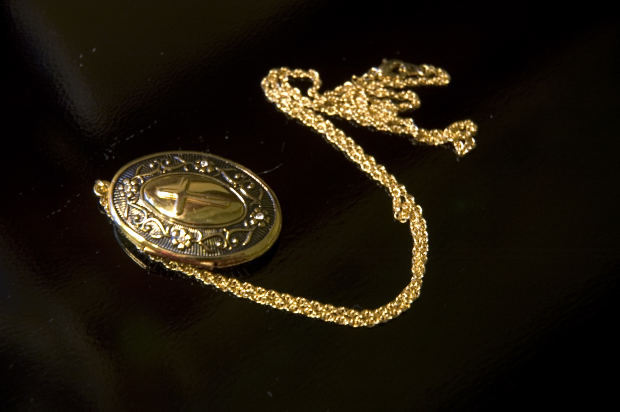 The owl sleeps by day and feeds by night, likely young man Siddhartha (Sid) who works in a call centre for a healthcare industry doing night shift job. He enjoyed the environment of the work as the company would give lot of freedom to the employees so they love to work in this shift. It was the cold season people coming with warm clothes like knitted jacket, jerseys and pullovers in the night shifts. And many a time employees have a habit of leisure activities like going for tea and smoke during the short interval to be alert.

Sid usually would take a break from working and he always preferred going alone for smoke. One night Sid was on his way to take a break and suddenly his team mate Vineeth said will accompany Sid for smoke and asked him to wait for five minutes so that he could finish his call. Sidhartha was restless and impatient he asked Vineeth to join him outside the office at smoking zone and walks out. It’s almost 10 minutes Sid is waiting for Vineeth to come and lighted one more cigarette, And Vineeth finally arrived whereas Sid almost finished smoking, and Vineeth lit a cigarette and was talking to Sid about the project that they were working on. And suddenly there is a commotion on Sid’s face looking at Vineeth’s action, while Vineeth is delighted looking at a Gold Chain which was lying right in front of Sid’s feet and picked it up without lapse of time and put it in his pocket. Vineeth was so thrilled while Sid was disturbed and pretended like nothing is wrong but from within there was self-condemnation that he failed to notice that Gold Chain after spending more than 10 minutes waiting for Vineeth at the same place.

The next day Vineeth met Sid and informed that the Gold Chain was worth of 30 Gms which he sold and gained 45 thousand rupees. Sid heard that and left from there with a hope that even he would also find a Gold Chain someday to make his fortune. Since then Sid’s searching mind got into the habit of looking thoroughly on the ground before crossing the streets or the roads with the hope that will find a Gold Chain which is likely to happen. Days passed and months passed without any progress but even then he did not lose determination or confidence.

It was almost 10 months passed Sid was on leave from work and had been to watch a movie with his friends, after that was on his way back home alone on the road with a usual habit. Stood at a junction and lit a cigarette and relishing, after a couple of puffs when threw the cigarette bud to stomp, found something covered in the dust and mud which sparkled that dragged his attention. When touched the ground, his fingers brushing against mud found something that astonished and he could not believe for a moment that has finally found a Gold Chain. He happily picked it up put it in his pocket and started walking a head and on the way found an old lady in a helpless situation. Who was searching something that she lost, It looked like it was predominantly precious, looking at her suffering and shedding tears Sid could not resist he paused and asked the Old lady If he could be of any help.

Old lady explained that she has lost her Gold Chain which was last thing left with sentiment longing which was gifted by her husband who is no more. She said I have lost many things in my life except this which I guarded carefully all these years, it’s a very unfortunate day for me that I lost it or may be it could bring fortune to the one who finds it. Started walking slowly searching on the roadside.

Sid who felt lucky a while ago thinking that the found Gold Chain brought him fortune, but looking at the Old lady’s suffering brought him delinquency and a guilt feeling. It took a few minutes for him to be thoughtful he looked back and the Old lady was going on her way still searching. He smiled and blissfully ran towards her shouting out loud, she stopped and turned back to see that Sid running towards her holding the Gold Chain in his hand, she was overjoyed and started weeping. Sid handed her the lost Gold Chain and said may be it was not meant to be an unfortunate day for you, but for the one who found it.. it did bring the fortune of making you feel happy.

The Old lady thanked and blessed the young Sid and at last both departed happily on there ways. Happiness is something you search but you may never find, happiness comes from giving and this is where you will find happiness. Sid found his happiness in giving. Let us make an attempt of making someone happy because it costs nothing.