You are here: Home / Social and Moral / An Incident that Changed Her Life Forever 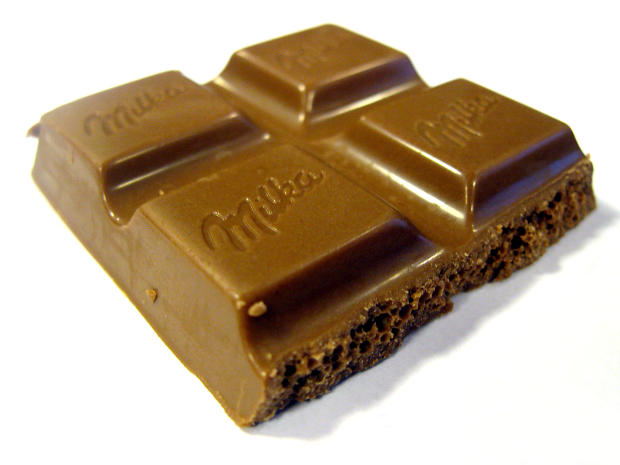 A beach near a sea is quite beautiful due to the view that sunset or sunrise gives to it. Mary, a little girl loves watching this happen & she comes every day to see it. She  also builds a sand castle, searches for sea shells & plays with sea water. She is a jovial girl of helpful nature. She loves watching tides that are formed in the sea.

One day she leaves for the beach early morning when no one can be seen. The sun hasn’t started rising. The birds are chirping in their sweet little voices as if calling her to play with them. She moves ahead & reaches the beach. No one can be seen. She started looking for sea shells & in doing so she accidentally smashes into something. She turns & looks back to see a man who has come for a walk. The man asks her name & where she lives. In a short period of time they become good friends irrespective of age.

He brings a chocolate daily for her. She shares with him all her good & bad experiences. He arranges a beach party for her on a beach house near the sea calling all her friends. That day is quite happy for her. She will show her friend to her parents & she is quite excited. She tells her parents about her party & finally the moment comes when her parents will meet her friend.

The party is on & everyone is enjoying food & music. He is the owner of the beach house & has taken full care of his guests. But life doesn’t move on as we think it would. The moment the girl introduces his father  to her friend the environment changes from celebrations to that of a quarrel. The girl’s friend was his father’s old enemy & her birthday turned into a misfortune for her.

Before she was able to cut her cake her father took her home forcibly. She cried with her eyes full of tears as if her dream has been broken & she was brought into reality. She doesn’t know anything about her father’s behavior to her friend.

So, the next morning she goes to meet her friend to know what happened last night. She reaches the beach & starts searching for sea shells around. Suddenly she finds her friend behind her. He has some chocolates in his hand. He takes her to his beach house saying that she will give her more chocolates.

She goes with him without knowing that it is her biggest mistakes. In the mask of her friend he is her biggest enemy of her & her father which her father failed to make her understand. That beach house takes the shape of a death cave for her where that man rapes her & leaves her life to end.He forgets his friendship & remembers only enmity that he has with her father. He will do full justice to it, whatever it takes.

She somehow picks herself up in a state of mental trauma & facing the harsh reality of life in such a tender age. When she goes home, her father is not ready to accept her after knowing what happened to her as he is considered more about his respect & society than her daughter.

She stops speaking & crying & is dead from inside. Her mother has kept her but is not able to get her happiness & life back. She now goes to work selling dolls for girls of her own age but never plays with any. She is too mature for her age now & has crushed her childhood. She has to take depression pills every week to survive.She has changed forever & wants to cry but cannot, wants to live but cannot. She is trapped in her sorrows & cannot forget what was done to her in the name of friendship. She now hates & avoids friends.

Her mother too goes on work after she has parted away from her husband for her. It is her mother which has given her strength to live and she is alive as long as her mother is.Her life revolves round her mother only & they both live for each other without caring for the world. She is lucky to get a good mother. She has took her away to her house away from the beach in a small village which is away from city & people here are not so cunning as in the city.

However that man is still free & able to take advantage of societal evils. He enjoys every moment of his life without repenting for what he has done. He has done what he wanted. After all he is a man & has right to do anything which he wants.

It is not known now how many years she would take to revert back to her previous state or will she be able to come back to life after what all had happened to her. She still bears the brunt of trusting wrong people & of being a girl in a man dominated society. Even her father has turned her face off her & living his life with her new wife & sons.She lives a life hidden from society, hiding her face while the person who committed the crime is free to live as he wants. This is what discriminates a girl from a boy. Society stands no where for her justice.