You are here: Home / Social and Moral / Just living my lie 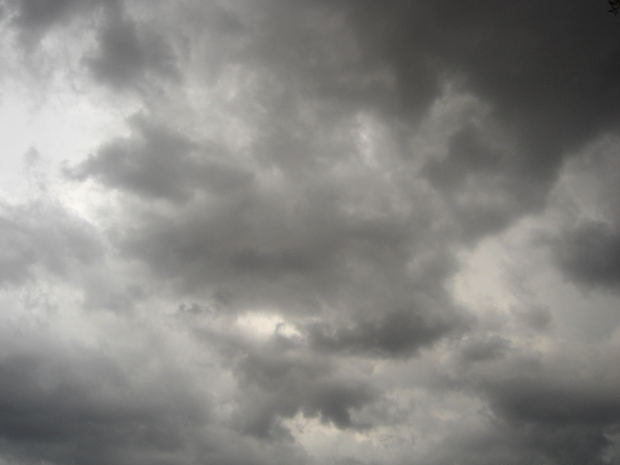 Do you remember a time when you had lesser things on your mind, you could concentrate on the little things that made you tremendously happy, even if it was just for a little while? I don’t. I do remember a feeling associated with the happening of the above, but I don’t completely relate anymore. I’m sure I’ve had those days, mostly when I was younger, but I don’t know why I lost it. I know one thing for sure, it only got harder since and hence, the lack of attention.

I wish I had a wider range of words. Better vocabulary, so I could tell you exactly what I’m feeling right now. No, it’s not complex but, I just want to be precise. “Without my education, I can’t find the words to say all things caught in my mind.” Looks like that’s clearly not applicable here, I am still unable to properly express myself after 21 years of speech and good hearing.

It’s a recent theory. From which, I have concluded that I am unfit to fulfill the position of a good companion, especially to those who are just as lost and confused as I am and are also of the same age group and gender. I am a bad influence on those who I hold very close to me. I didn’t realize I was being this person until this morning. As the day passed on, I watched the proceedings of invisible plans that I had quite unintentionally created. I can see how my casual behavior, which is far too generalized, have allowed someone, quite close to me, who does, most of the time, depend on me for opinions regarding important things in life, to make some very bad choices too. It’s bad enough, I made some wrong choices but, I know that they’re not good and I know that I can’t undo them and neither will I admit that they were bad choices because I have a fat ass ego that’s taller than Mount Everest!

To compensate for having that ridiculously large amount of ego, I make excuses for myself all the time. It’s only recent that I realized how frequently I make some really good excuses. The sad part about it, I don’t just make them for the listener anymore. I make these pathetic yet logically valid excuses and later on I’d justify them in some weird fashion which would be valid too and funnily, I would believe it myself. This phenomenon takes place at a minimum of 5 times a day if I’m socially active in some way. So, basically, when a fellow human being decides to strike a conversation with me and I do decide to bullshit them, I do it so well, I’m convinced it’s true by the end of it.

If, by some unfortunate chance, that something, which I decided to bullsh*t about with valid reasoning, happens to be a decision maker at a course changing moment in life, there you go, I begin to lead my life, then on, based on a lie I never realized to be a lie. I am uncertain about the number of times this has already happened to me. So, technically, I could be living a lie. Oh heck! I’m sure I am.
The thing about this text editor and me, there’s no ego here. That means you too. I love that you’re actually reading this random post-teenage mental analysis crap. There is no ego here.

I’m a bad influence on some of the nicest women I have met. Yes, I write, today, out of guilt. How so? I have made some bad choices at the spur of the moment or when I had some ridiculous mood swings or at hormonal and insecure times. These choices have always had some crazy consequences. For example, I’ve been stuck in a car ride at 5:30 am without my pants and I have had to run across the motel room with a piece of unidentifiable cloth. I wonder how easily explainable that scenario is to an overly protective older sibling and a much concerned spouse of theirs. That was an example related to a spur of a moment kind of a thing. The other two kinds of choices are a lot worse with much more extreme consequences which are quite hard to explain at the same time make the listener poorly judge my character if they’d ever know the entire truth.

Sadly, I couldn’t get away from these consequences and neither could I get away from explaining them to those who take a particular interest in my life. I did what I do. The part where I try to rationally find the perfect excuse to my every ridiculous move. By the end of a few of those bad happenings in my life, which are latest so far, I only stay convinced of my little lies for a little while. I have understood my own game and I don’t fall prey to it anymore. I do semi-believe myself but after a considerable amount of time, when the matter finally qualifies for old, I realize all those falsities. I go back these days, to what my intentions were and I don’t allow the good interests of my fellow men take over me. This is how I trap myself with the bad influencing traits.

It took me a thought, just one. I laughed about it when I said it out loud but, it has haunted me the entire day at every silent moment I could steal from my noisy life. The thought was about me as a child and the plans she had for me. I really can’t believe I am so much more different from the person I wished to be. Actually, I am nothing like her and I have sort of let her down. “The ideal me.”

Here I am, doing these bad things and being this person I didn’t want to be and telling my friends that it’s okay to just do what you want and that, to each of us, we ourselves, respectively, are most important and that those who think different from us and try to enforce their ideals and principles on our lives should buzz off and let us be. That’s not right. Sadly, I’m still trying to find out what is right. I wish I didn’t have this ego. It’s encouraged me to confidently live my LIE. I don’t know about you, do you live your lie too? I’d like to feel normal sometimes but my Mt. Everest can’t handle saying it out loud. Thanks for reading.