You are here: Home / Social and Moral / THE KILLING… 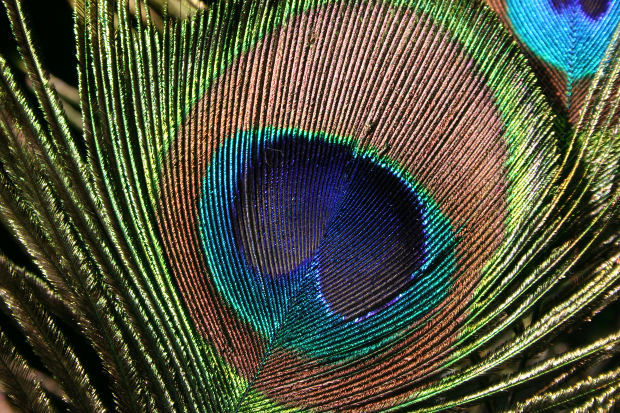 The point of the knife penetrated millimeters into his brother’s chest. The light gray shirt he was wearing, turned darker around the area where the knife has entered his body, like a stain of ink on a blotting paper, expanding its existence every second, as if darkness was oozing out of his body. Gripping the knife tightly with his shaky hands, Rhyas pushed it a millimeter deeper into his brother’s skin. Agony and pain overflowing from his eyes in the form of tears, he further pushed it. Little at a time. Just a millimeter. The emotionless, red, stone-cold eyes of his brother did shake him but could not move him. He knew the anatomy well and this time, it was not to hurt him, but to kill him.

Arjuna: “O Lord Krishna, what pleasure shall we find in killing our brothers?”

Krishna: “Pleasure is not derived either by fighting or by not fighting. On the contrary, it is derived by being free from likes and dislikes and that too, only after controlling one’s senses.”

Arjuna: “In this war, don’t you think that we should restrain ourselves and withdraw from the sin of the destruction of the family?”

If he has to do this, why don’t he just push the knife with all might and puncture his heart and finish this off in a second? No. The pain, the misery, the anger and agony in his eyes wanted to relish every millimeter to his brother’s heart. He wanted to feel the knife cut through the ribs and then slowly puncturing his heart, ceasing it to stop. No, he won’t twist the knife to bring it all to an immediate end. He would wait in patience to feel his body turn cold as the blood flow to and from his heart slowly stopped. He wanted to give it all back to his brother. All the pain and agony he has caused him till date. He still won’t be satisfied. He will wait in patience in front of the open-grave to observe the worms slowly creep out of the ground, consume his brother’s body, inch by inch, first the skin, then the muscles and lastly the hollow bones… degrading into the wet, muddy soil… The air around the place, stinking from the rotten body, inviting the flies for a meal… he will breathe in that air with utter delight, filling his lungs with the rotten existence of his brother… still, he won’t let go of him…

Arjuna: “aho bat mahatpaapam kartu vyavasitaa vayam…it is a shame that, though possessed of intelligence, and yet, motivated by greed, we are bent upon perpetrating the great sin of killing our relatives and friends.”

Krishna: “kaam esh krodh esh rjoguna samudbhavah…it is greed in the form of desires which is insatiable and grossly wicked. It’s man’s enemy and conduces him to commit sin. Therefore, in all circumstances, it is the greed that should be renounced.”

Rhyas and his brother were born together, lived together and loved their togetherness which was supposed to last till the end of time, as they promised to each other after their mother drowned in the Ganges when she went for a dip to purify her sins… People said she drowned because she went against her religion, but Rhyas believed it was her greed of salvation that took her life. How ironical! How ironical that both these twins of conflicting personalities look and appear the same. How ironical that this murder looks more like killing of a self. How ironical, the clock ticked slower than usual, making this painful death seem longer. Rhyas put a little more thrust on the knife. His brother groaned in pain. He struggled the nearing death, but he dint fight him back. The protruding eyes turned red and tears rolled down to his lips. It tasted salty, much like the blood that was oozing out of his mouth as the knife slowly punctured his pacing heart. While doing the act, Rhyas had pain in his eyes, but satisfaction too. He was losing a greater part of himself, but gaining something even greater…

Arjuna: “You are continually insisting upon waging the war Madhusudan. But I see a potential policy trap that is ready to snare us because we don’t even know what is preferable for us, that is, to fight or not to fight.”

Krishna: “shareer yaatraapi ch te na prasidhyed karmanah…. Perform your obligatory duty, for action is better than inaction. Since action is rooted in the Imperishable, therefore, if you only do just that, you will surely conquer the enemies in the war. It’s a fait accompli that desisting from action, you cannot even maintain your body, much less to think of your relatives or this kingdom.”

The action of killing and getting killed finally ended. Rhyas left the knife stabbed in his brother’s heart. Slowly standing up on his feet, he looked down on the dead with an emotionless face. The dead needs no attention nor any praise. He walked to the open window, looked out at the dark sky and witnessed the dawn break as the beautiful morning was dressing up to look more beautiful. A tinge of blue and crimson spread over the horizon as the sky was gaining consciousness… Not really waiting for the sun to rise, Rhyas walked to his duffle bag, lying on the bed, and slowly unpacked everything that was haphazardly put in it. He put his clothes in the cupboard, the dry food on the table and a photo of his mother near the window.

Looking down at it, he exhaled a deep breath… and gently walked out of his room, towards the balcony. The balcony door was open. A man of Rhyas’ stature, leaning on the railings, looking down, was humming a soft melancholic tune that seemed to fill the morning silence… Rhyas walked to him and from the behind put his palm on his shoulder. The humming stopped and everything that was alive seemed to lose their life for a moment. Rhyas cleared his voice and in a soft tone spoke out, ”Brother, I’m really sorry for last night. I went over our argument again and again. I knew I was wrong. But my ego just didn’t let me accept my wrong. We were born together, we lived together and we loved our togetherness but somewhere, always, my ego and pride got the better of me. I realize I have nurtured my ego, more than a brother to me, from the day I was born, while the evil crept inside me. I had packed my bags, determined to leave home. But I have unpacked them again. I have killed my ego. I have killed the evil inside me. There is no pride inside me now that can break us apart. Will you forgive me?”

And then Krishna spoke: “Free from the fetters of hope and fear, a karma-yogi engages himself with enthusiasm in the great battle against evil and grief; the evil of his own nature and the grief of his fellow man. Atman is forever free in its own being and for atman, good and evil are but empty words and the fight against the latter is in vain. And the knowledge that has just been revealed to you, Hey Arjun, for it to be useful, it must be practiced and absorbed into your heart by constant endeavor…