You are here: Home / Social and Moral / Living Dead 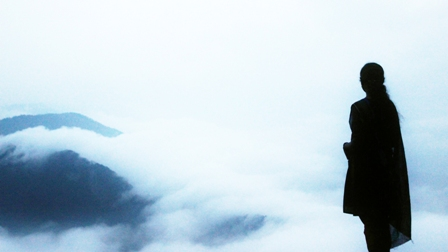 “Funerals are for the living, not dead”
-Anonymous

“Heaven” or “Hell”, who knows what lies where!!, but one thing we definitely know and experience, is that, the existence of life itself is a journey from the beginning to the end and we do not have to experience heaven or hell by dying. Life itself throws us in such circumstances that it becomes more like a living hell, for us. But then, life has to still go on.

Lucky are the people, who get to live their old age. But then, why do we always complain about growing old. The answer may be simple, that with age, comes many age related problems as life saps the energy out of us, after all it is all about ‘give and take’, all about ‘karma’. Life gives us many reasons to smile and rejoice, as kids we are carefree and when we grow old we have all the experience, as we have gone through various seasons and phases of life.

But yes!!! the ultimate truth of life is revealed only in the end, as all good things come to end, so does life. And still it goes on!! Yes life itself is a biggest paradox of human life.

Funerals are not for the ones who have gone,but for the ones left behind. As the living mourn for them, we try to console ourselves at times and sometimes we just breakdown. At times we assume the presence of those gone and at times miss their existence.

We know that , they will not come back but memories keep haunting, as it is a lifelong loss for the living.
Losing someone ,young or old is like a curse for the living, some go insane and some console themselves, by saying, that ‘God loves those, die young’ and for the old we use the term ‘sunset years’ and try to pacify the ongoing turbulence in our mind.

Another struggle with life began , earlier it was the responsibilities of the life which kept him busy and now life was keeping him busy by playing ‘hide and seek’,at times there was temporary memory loss, at times the strong medicines left side effects in the form of swelling all over his body, even breathing was with effort and soon the pangs of paralysis started spreading.

.The family stayed by his bedside all through ,but now he could not acknowledge their presence. Though he was not in pain but seeing him slipping away from his life and moving towards the final journey was not easy for the family . We as a family, still hoped against hope for some miracle , but he was a fighter,for him it was ‘do or die’ , he could not lie on the bed motionless in a vegetative state ,so he happily embraced death.

Before life could throw some more hurdles at him ,the tug of war was over, he won by peacefully slipping into a never ending slumber. His victory was our loss,the loss of the living,we were now left with only his memories .
It was now time to bid final farewell to him. His motionless body was now brought down from his cot ,and now he was lying on the floor. Though, now, he was unaware of the things happening around him, but seeing him like this was a shock for the family, but, no living being could deny him his last funeral rites .

Till few minutes back , we were praying for his recovery, his life , but now he was no more and this was the last time we were seeing him,but we could not stop him from going.
As now, we were busy making arrangements for his last journey-the funeral procession.

His body laid to rest, his ashes immersed , his stuff donated at Haridhwar, mustard lamp lit in his memory for thirteen days .
He was now in the category of dead, he no longer could receive or reply our calls or messages, neither could we, except for the obituary columns in his remembrance.
Soon his smiling photo was adorned with a garland, he was now no longer addressed as ‘Shri’ or ‘Mister ‘ but with the word ‘late’. He may have gone to a new world or may have attained salvation, who knows!!.
But we humans are still performing his memorial services amidst tears, mourning and loss.
Lost in his memories, time spent with him, wanting for more of his advices and care, his presence ,miss him ,asking for impossible, wish he was still alive.
But now it is just the memories of him.

“Dead people receive more flowers than the living, as regret is greater than gratitude ”
-Anne Frank

We realise the value and true worth of many things in life, when they are long gone, and we are just left with memories including the final goodbye and so the funerals are definitely for the living not dead.