You are here: Home / Social and Moral / Relation of Humanity 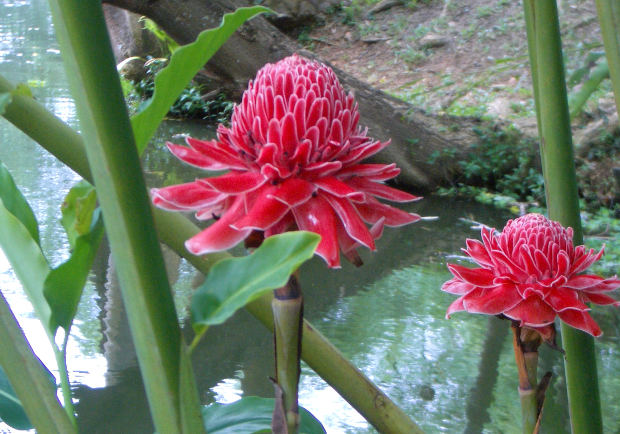 Rita was a college going girl whose brother , named Ravi, was doing his family business after the death of their father. Her mother , named Rashmi, was busy in match-making for her brother(Ravi).One day, a matchmaker lady came to their house and informed about a girl, named Rakhi, by giving the suggestion of his marriage.

When Rita, Ravi and her mother went to Rakhi’s house, they were informed that Rakhi is an orphan girl stayed in her uncle’s house because she lost her brother and parents in an accident. Rakhi’s uncle informed them ” We can do her marriage properly because her parents had left the property for her.So, we can bear the expense of her marriage.”

Ravi asked about her qualification and he was informed that she was only 12th pass because she lost her parents when she was in 12th class. Ravi saw her certificate of 12th class and decided to continue her studies. He said “What is she doing now? Is she doing any job or business?”

Her uncle told ” We want to get her married as soon as possible because I want to fulfil the responsibility of my late brother”.

Ravi told her that you will have to continue her studies and she must do some earning because nobody can marry an uneducated and non-working girl. Her uncle got agreed with him. After that, Ravi got a job of Receptionist for Rakhi with the help of her sister, Rita, because he wanted to help Rakhi as a human being.

One day, Ravi came Rakhi’s office with her sister and told her ” I want to help you. I have noticed that your relatives(uncle) wants to capture your paternal property in the name of your marriage.You will have to take the possession of your property, otherwise, your uncle can capture it.I have helped you for job because I want that you should become self-dependent and you should continue your studies.”

Rakhi asked ” But what can I do. I can’t earn much for studying. How can I bear the expense of my studies?”

Ravi asked ” Who lives in your paternal house?”

Rakhi replied ” My uncle has given it on rent”.

Ravi advised her to take possession of her paternal property and stay to live in your paternal house because your uncle is taking the rent.

Rakhi said ” My paternal house is 2 -storey ed. I can stay in one floor and tenants in other floor. When Rakhi came home(uncle’s home), she insisted that she wants to stay her parents house because she can’t forget her parents and brother. So, she succeeded in her plan to capture her parent’s house.

In the meanwhile, she knew that Ravi had rejected her for marriage because he wanted to help her as a human being, not for capturing her property.One day, Rita met with Rakhi and advised to continue her studies because you can bear the expense of your studies with the income of rent.

One day, Ravi met with Rakhi and said ” When I came to see you for marriage proposal, I decided to make you self-dependent because after the death of my father, my uncle tried to capture our business and my mother was not very much educated. So, I decided to take the possession of my business because I never want to make my mother and sister dependent on others.” Rakhi asked ” But you have rejected me for marriage. Can I know the reason?”

Ravi replied ” I have helped you being a human being, not a “would -be” husband. I want that you should never be in doubt that I have helped you for capture your property for marriage as a dowry. I noticed that your uncle and aunt treated you as a burden. That why, I have helped you. I am advising you that you can do court marriage because you are studying and doing job , so you can easily judge the nature of a person”.

Rakhi thanked him because it is easy to find life-partner but it is very difficult to find a good human being who helps without his personal benefit.